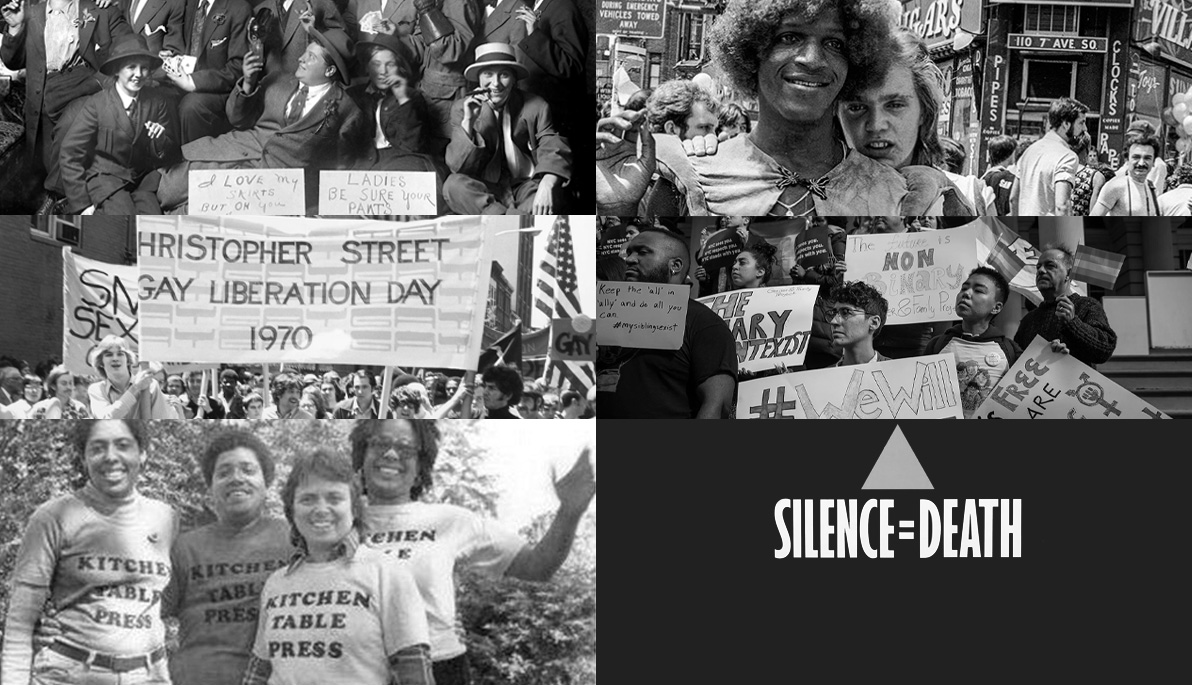 Ron Goldberg, web content editor at New York Tech, talks about the history of the LGBTQ+ movement, and why these stories must be taught, honored, and celebrated.

LGBTQ+ Pride Month is celebrated each June to honor the anniversary of the 1969 Stonewall Uprising in New York City. But while you may be familiar with the basic history of how the gay patrons of the Stonewall Inn spontaneously fought back after a late-night raid by the police, did you know the first battle cry that night was sounded by a lesbian? Or that a “homosexual rights” protest was held in front of the White House in 1965? Or that trans women fought back against police harassment during the Compton Cafeteria uprising in San Francisco in August 1966?

No? Growing up, neither did I. After all, queer history isn’t passed down around the kitchen table or taught in many schools (or even many colleges).

I first learned about this history in 1989, when I was a member of the AIDS activist group ACT UP (AIDS Coalition to Unleash Power). Maybe you’ve seen clips of one of our protests on YouTube or remember our “Silence = Death” signs.

In honor of the 20th anniversary of Stonewall, I joined a small study group dedicated to uncovering the history of queer activism. We learned that World War II had inadvertently jump-started the gay movement by bringing formerly isolated homosexuals into the same-sex environments of the military and the new workplace. But when the newfound freedoms of the war years crashed into the regressive conformity of the 1950s, lesbians and gay men were forced to navigate a minefield of police raids, entrapments, morals charges, and loyalty oaths, as even a “hint of lavender” could result in the loss of home, employment, family, and friends.

It was in this dangerous environment the early homophile groups, the Mattachine Society and the Daughters of Bilitis, were founded. However brave my activism might have been, it paled in comparison to these early activists who publicly acknowledged their homosexuality and demanded their rights despite the great risk to their personal lives.

Strangely, the history of the post-Stonewall groups was much harder to find. It wasn’t until I visited a used bookstore in San Francisco that I stumbled upon a treasure trove of long out-of-print books telling the stories of gay liberation. I was so excited by my discovery that I failed to understand why these books were there: their previous owners had all died from AIDS.

As a member of ACT UP, I knew I was participating in history. But with so many of my friends and colleagues dying, I also knew it was my responsibility as a witness to try to write down and record what happened so that our stories would not get lost. The fruit of these efforts, my book, Boy with the Bullhorn: A Memoir and History of ACT UP New York, will be published in September by Fordham University Press.

It’s important for people to know their history—and not just because they’re otherwise doomed to repeat it. Part of understanding your identity is knowing “where you came from,” whether as a family or a community; an ethnic, religious, or racial group; or as a country. It’s important to know on whose shoulders you stand.

That’s one reason why the current surge in book banning is so dangerous. It’s easier to oppress people and treat them as “other” once you’ve severed their roots and untethered them from their stories. This is as true whether it’s Putin trying to erase Ukrainian history and culture, or politicians in this country trying to ban teaching about racism or passing “Don’t Say Gay” laws to prevent discussions of queer lives.

Queer history is American history, and our stories deserve to be taught, honored, and celebrated alongside this country’s other great movements for civil rights. Although the specifics of our struggles may be different, our goals are the same: respect, equality, justice, and the right to love and live our lives as we choose.