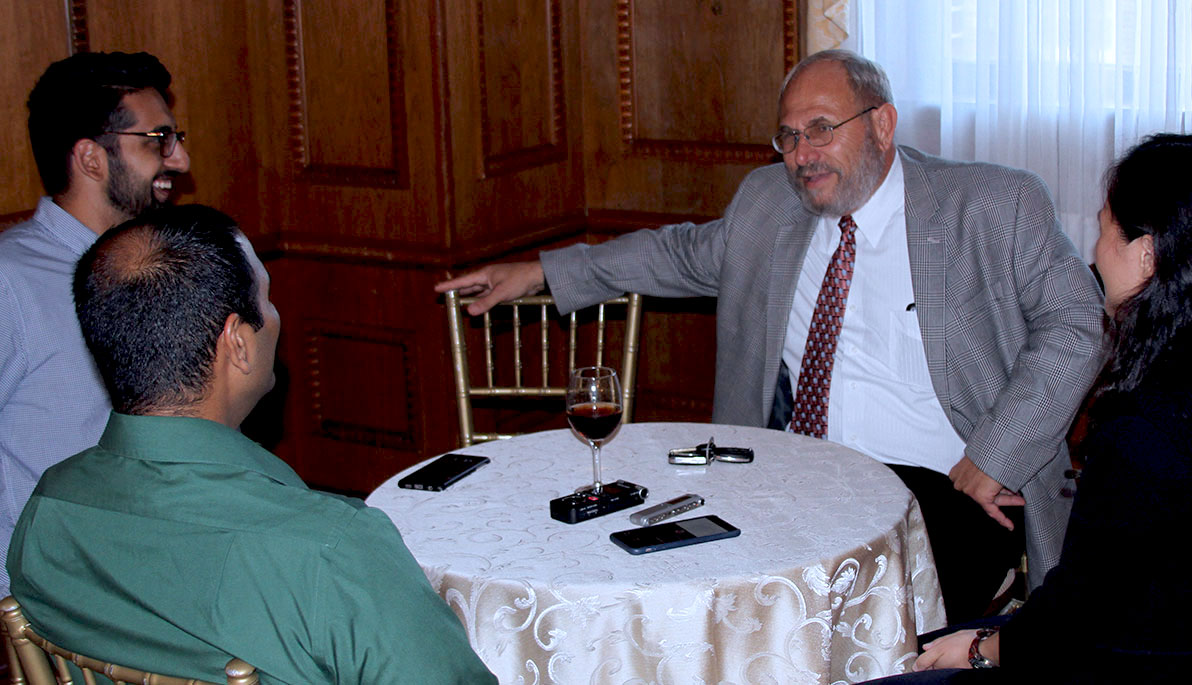 On July 14, retired Army Maj. Gen. Philip Volpe (D.O. ’83) visited NYIT College of Osteopathic Medicine Alumni Career Day to share his experiences with NYIT medical students serving in the U.S. Army. For more than three decades, Volpe has served as a military physician in various roles, including chief of family medicine and emergency medicine at Tripler Army Medical Center in Honolulu, HI, commander of the U.S. Army’s Western Region Medical Command (which oversees all military hospitals west of the Mississippi River), and commanding general of the Army Medical Department and School. In addition to Volpe, NYITCOM Alumni Career Day welcomed nearly 30 other graduates who discussed their professional experiences across various medical specialties.

Class of 2018 medical students Cherry Huang, Ronak Patel, and Harkaran Rana—recipients of the Health Professions Scholarship Program offered through the U.S. military—spent nearly 90 minutes at NYIT de Seversky Mansion speaking with Volpe about his experiences, professional insights, and advice for how to pursue the many opportunities available to doctors serving in the armed services.

“I have no regrets about going into the Army,” Volpe said. “I was very skeptical when I first went in, and I had planned on serving my four years and getting out, and things changed. Priorities changed. Your priorities will also change as you go through different steps.”

One turning point for Volpe occurred in 1993, when he served as command surgeon in the First Battle of Mogadishu.

“We had lost 18 people, and another 86 were wounded in about a two-hour time period,” recalled Volpe, who was then a major in the army. As the triage officer, he sorted the wounded from the dead and, in one case, had to make one of the toughest decisions of his medical career. “I lost some friends there, but one brave soldier was a good friend of mine.”

His friend had been hit from behind by a rocket-propelled grenade. Volpe oversaw the soldier’s triage but realized that attending to his severe injuries meant precious time spent away from treating other wounded soldiers who needed his medical expertise.

“It was the first time in my life I really had to decide and choose someone we would not treat,” said Volpe. “That was hard because he was a friend of mine.”

For physicians, the connection between the mind and the heart is often understood through the autonomic nervous system, regulated by the hypothalamus above the brain stem, which governs heart rate and blood pressure. At that moment, Volpe’s own mind and heart connected in a way he never expected—the need to perform one’s duty while acknowledging how your emotional state wants to drag you in the opposite direction.

Seeing the bravery and selflessness of U.S. soldiers on the battlefield that day encouraged the NYITCOM alumnus to dedicate himself to military service. “That was the point that convinced me to make it a career,” he said.

In addition to hearing Volpe’s stories, the students had the opportunity to ask whatever they wanted about careers in the military. They discussed everything from interviewing tips, to securing rotations at Walter Reed Medical Center and other high-profile facilities, to applying for prestigious posts such as the White House Medical Unit.

“For second-year students like you, the most important thing is to do as well as you can because your grades, your dean’s letter, and your board scores make a huge difference,” Volpe told the students. “That is what residency training directors look at when you apply and fill out your application. They want to select the best.”

As the evening concluded, Volpe stressed how satisfying it was to serve his country through a career in medicine, one that began at NYIT-Old Westbury.

“I would do everything over again if I had to,” he said.

Major General Philip Volpe (D.O. ‘83) retired from the U.S. Army in 2013 after 30 years of distinguished service. His final duty assignment was as the Commanding General at the Army Medical Department Center and School in San Antonio, Texas, where he led and managed education, training, and leader development for all of Army Medicine. He currently serves as assistant professor at the Kansas City University of Medicine and Biosciences, and also provides services as an independent healthcare and leadership consultant.

After graduating from NYITCOM in 1983, he became a board-certified family physician. After an initial period of clinical and academic assignments as a family physician, he spent more than 15 years in command and staff positions leading medical units in combat and in the delivery of healthcare at military facilities throughout the U.S. He participated in numerous combat deployments, and has been awarded the Defense Superior Service Medal, Bronze Star, Purple Heart, and Army Commendation Medal with V Device for Valor.

He is a graduate of the Army War College and was awarded a Distinguished Writing Award for publishing a personal experience monograph on his experiences as the task force ranger surgeon in Somalia in 1993 (Blackhawk Down). Volpe was selected as the Military Family Physician of the Year in 1996 and served as president of the Uniformed Services Academy of Family Physicians in 2003. Additionally, he served as co-chair of the Department of Defense Task Force on the Prevention of Suicide by Members of the Armed Forces from 2008 to 2011. Volpe has returned to his alma mater frequently to meet with current students—most recently at the October 2017 NYITCOM 40th Anniversary Symposium, where he discussed “Medical Support in Disaster Relief and Humanitarian Assistance.”