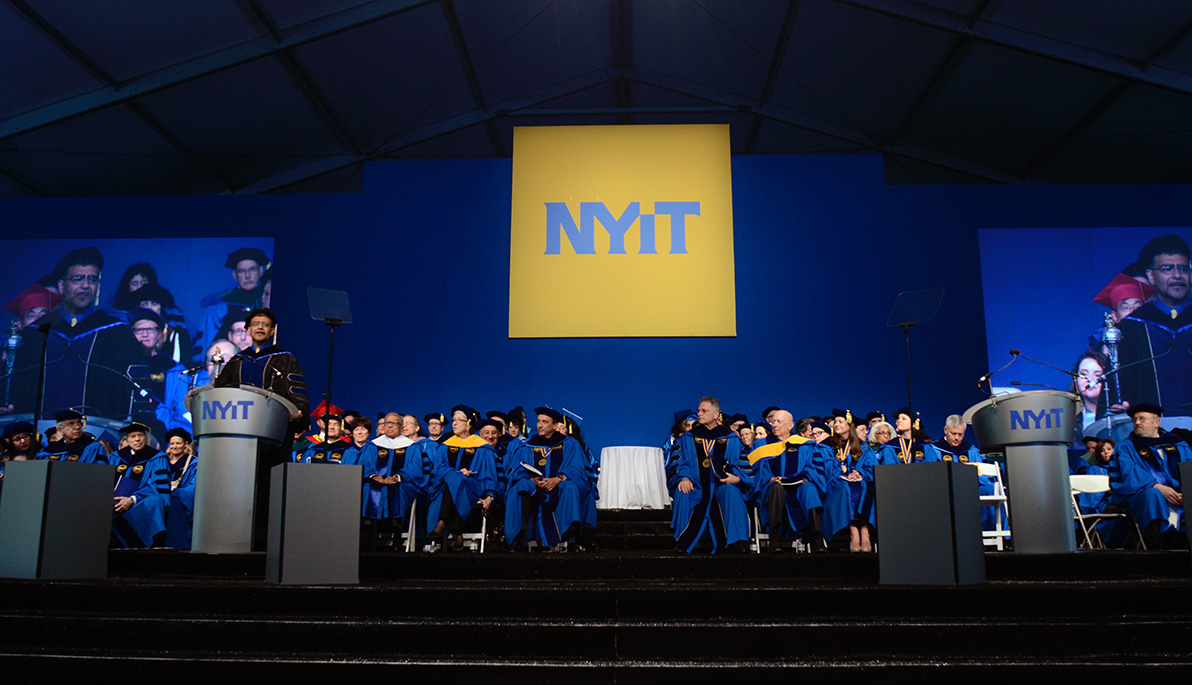 Before an audience of more than 9,000 gathered at its Old Westbury campus, New York Institute of Technology (NYIT) celebrated its 55th Commencement, a global event saluting 2,900 graduates from throughout the United States and 81 countries. Forty percent of students earned undergraduate degrees; 60 percent earned graduate, medical, professional, or post-graduate degrees.

NYIT President Edward Guiliano, Ph.D., conferred the degrees. In his commencement address he told graduates: “Through your shared experience here inside and outside the classroom, you’ve cultivated an appreciation for diversity of cultures and diversity of thought and the ability to adapt quickly to different environments, as well as the skill sets to adopt technology to facilitate solutions for a world that needs your knowledge, your experiences, your ideas.”

He further noted, “Here we’ve given you a wonderful canvas to create yourself, have the courage to fail, and confidence to live boldly and bravely as you create the future.”

Previous Next
WATCH VIDEOS FROM COMMENCEMENT

Students from NYIT campuses in Old Westbury, Manhattan, Canada, China, the United Arab Emirates, and online attended the ceremony, which was webcast live around the world.

Also, a new tradition began at this year’s commencement, recognizing the importance of innovation and entrepreneurship as core strands of NYIT’s DNA. President Guiliano awarded the NYIT Presidential Medal for Innovation and Entrepreneurship to Emily Nunez-Cavness and Betsy Nunez, co-founders of Sword & Plough, for their social entrepreneurship. An online retailer that transforms military surplus into fashionable handbags, backpacks, and other accessories, Sword & Plough donates 10 percent of its profits to veteran organizations.

Ana Robakidze, the Class of 2016 student orator (Tbilisi, Republic of Georgia), who earned a B.S. in Computer Science, talked about her personal journey and the spirit of NYIT students. “I’ve learned at NYIT that it doesn’t matter if you’re from China or California, if you’re going to be an architect or a doctor, if you’re rich or poor, male or female. What matters is to grab for your future. In the end, you are the one who controls it. We all did that at NYIT. And today we are graduates,” she said.

Following the main commencement ceremony, students were individually recognized at ceremonies for the School of Architecture and Design; School of Education; School of Engineering and Computing Sciences; School of Health Professions; School of Management; and College of Arts and Sciences.