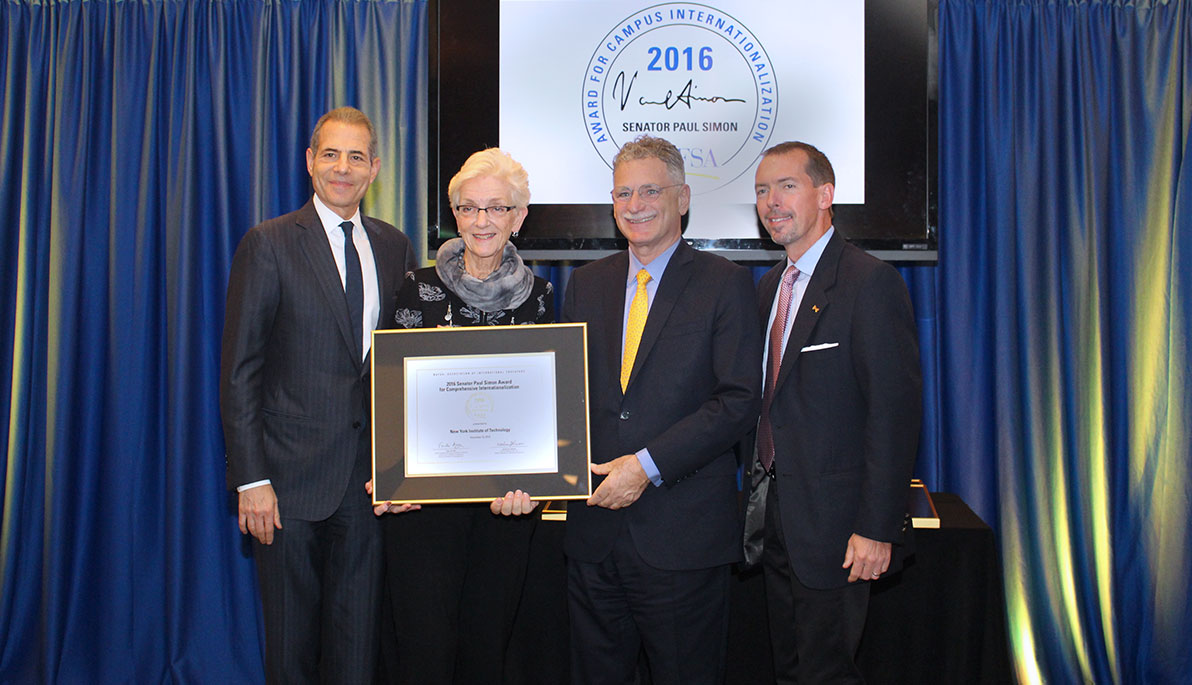 President Edward Guiliano, Ph.D., accepted the 2016 Senator Paul Simon Award for Comprehensive Internationalization on Tuesday in a Washington, DC, ceremony hosted by NAFSA: Association of International Educators. The ceremony marked the culmination of several months of recognition and awareness-building about the values represented by NAFSA, a non-profit devoted to student and scholar exchange across nations and global perspectives in higher education. NYIT is one of four institutions honored this year as models of comprehensive internationalization. Three other universities won Simon “Spotlight” Awards for targeted programs in these areas.

According to NAFSA, 1,043,839 international students studying at U.S. colleges and universities contributed $32.8 billion and supported more than 400,000 jobs to the U.S. economy during the 2015-2016 academic year. And when it comes to the economic impact of international students, NYIT ranks in the top ten in New York state with a contribution of $122 million supporting 765 jobs.

In his remarks, President Guiliano noted the care NYIT offers international students in New York, citing a number of important initiatives to create positive experiences for international students. He also mentioned the opportunities for New York-based students to travel, with options ranging from Alternative Spring Break to traditional study abroad programs, all of which can be supported by a Presidential Global Fellowship.

“The one university model—one curriculum, one diploma—is key,” said President Guiliano. “Students and faculty and staff members can move around the world fluidly and flawlessly for research and study. We are in the middle of an educational evolution. Communication today is increasingly dependent on and demanding of cultural literacy. We are delivering that.”

This week has been designated International Education Week by the United States Departments of State and Education and State. To coincide, NAFSA has published an annual report, “Internationalizing the Campus: Profiles of Success at Colleges and Universities,” which features NYIT and the other 2016 Simon Award winners.