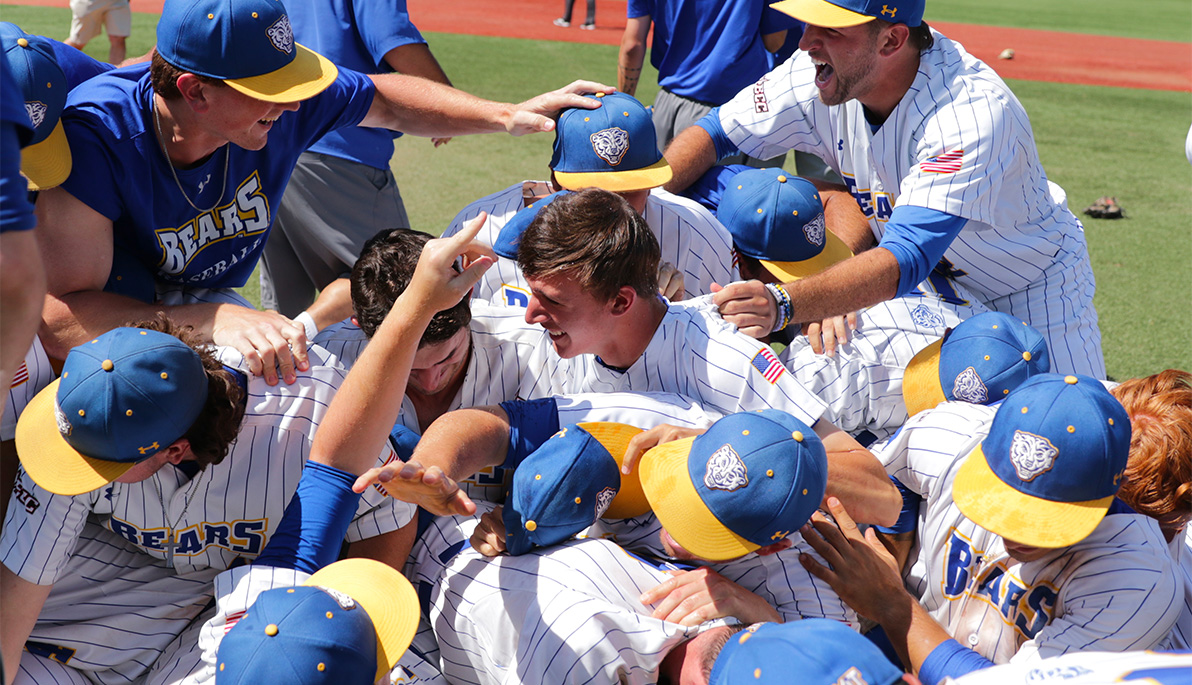 The NYIT baseball team set a program record for wins in a season on Saturday, May 18. And that barely registered among the reasons to celebrate during a raucous postgame outpouring.

The Bears defeated Wilmington, 6-3, at Adelphi’s Bonomo Field to sweep through their first regional appearance in 36 years and advance to the best-of-three Super Regional at Southern New Hampshire University on May 24.

NYIT entered this postseason with only one NCAA Tournament win in program history—in the 1980 opener against Le Moyne. The program had not posted a winning season in 13 years.

However, longtime major leaguer Frank Catalanotto, hired last June as head coach, has reinvigorated a once-distinguished program. He now has guided the Bears within two wins of their first-ever College World Series.

In Saturday’s clincher, Wilmington pulled even at three with a two-run top of the eighth. However, NYIT answered with three runs in the bottom half. EJ Cumbo walked and ultimately scored from third on Ryan Kuskowski’s run-scoring fielder’s choice. Matt DeAngelis—who had opened the scoring in a three-run second inning with an RBI double—this time padded NYIT’s lead with an RBI single. Matt Malone followed with a run-scoring double. 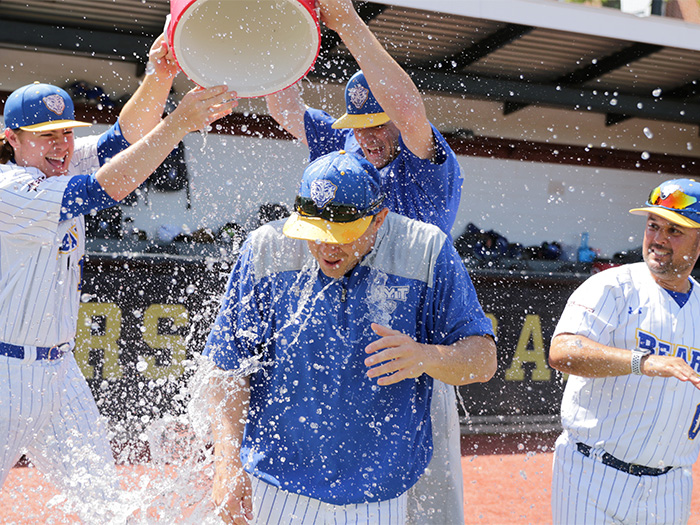 Head Coach Frank Catalanotto is doused with a jug of water by Chris Keenan and Ryan Murphy during the postgame celebration.

DJ Masuck, who tossed 134 pitches in a win against Wilmington in the regional opener, entered for the ninth and shut the door to pitch NYIT into the Super Regional.

“It didn’t matter,” Masuck said about the heavy workload two days earlier. “I had everything left in the tank.”

Said DeAngelis, a senior who went 2-for-3 with two RBIs: “We didn’t really have the showing we wanted in the conference tournament, so this is really meaningful.”

On the mound, Chris Mott continued the sturdy starting pitching produced by Masuck in the opener and Joseph Murphy in Game 2.

Mott, who had struggled to close the regular season and in the East Coast Conference tourney, took a scoreless effort into the sixth inning against Wilmington.

He eventually turned the ball over to freshman left-hander Dean Fazah in the sixth with the bases loaded and two outs and the Wildcats having clawed to within 3-1. Fazah proceeded to fall behind—three balls and one strike—before coaxing an inning-ending flyout in foul territory down the right-field line.

It marked the third time Fazah had inherited the bases loaded this season. He now has stranded all of those runners, and a team-best 19 of 20 inherited baserunners overall during his freshman season.

Fazah pitched into the eighth inning.

Then, Zach White, who closed out Friday’s win against Franklin Pierce with three scoreless innings, took over for Fazah after a leadoff walk. White surrendered a one-out double that placed the tying run in scoring position and departed. Freshman Ryan Mueller entered. Wilmington evened the score at 3 on a sacrifice fly and hard-hit infield single down the line that third baseman Kieran Dowd smothered with a highlight-reel diving catch.

No matter. NYIT answered with three runs in its half and is Super Regional-bound. The Bears also set the program’s single-season record for wins.

“It means that we put in a lot of work,” said Catalanotto, who was doused with a jug of water by Chris Keenan and Ryan Murphy during the postgame celebration. “These guys have responded well. I knew in the beginning, when I first got the job, that with this coaching staff and with what we can teach them, we could win a lot of games. I didn’t imagine we’d go this far. But with how these guys have responded, I feel like we can win the College World Series now. These guys are so resilient. They keep fighting. And we can hit with anybody.”