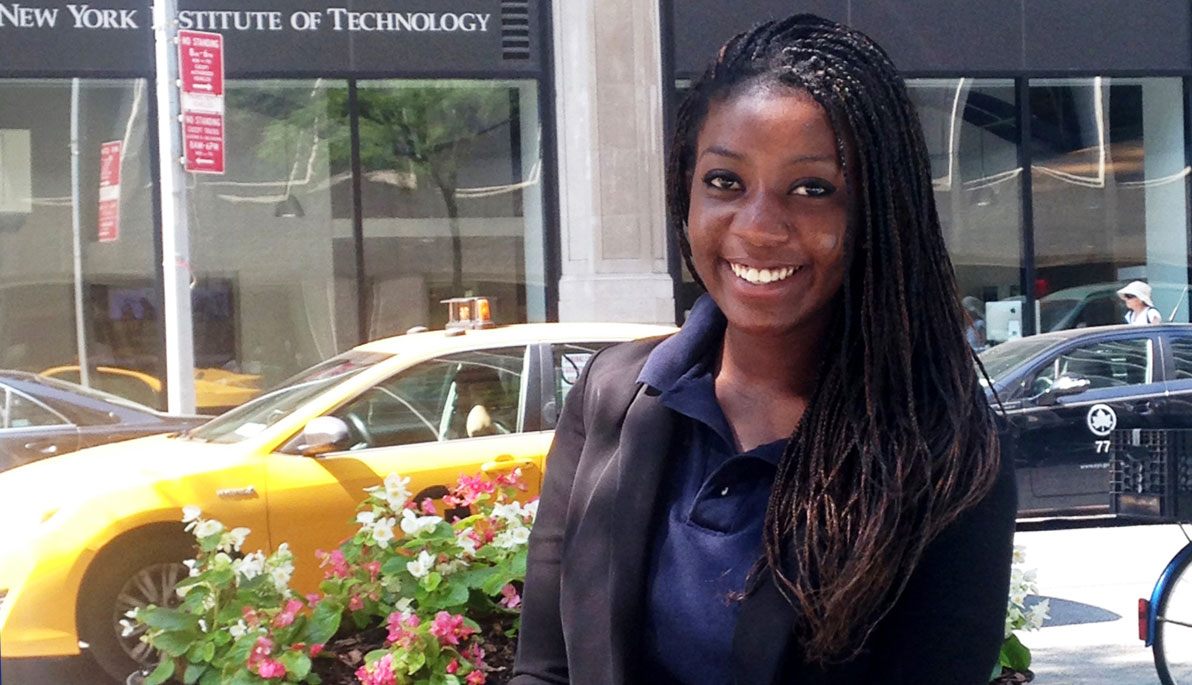 My journey to NYIT began in January 2011, with a 16-hour flight covering 7,324 miles from Nairobi, Kenya, to New York City. The turbulence in the air was nothing compared to the uproar that came upon landing, as I was welcomed by a massive snowstorm. The weather shocked me, mostly because I was accustomed to the pleasant tropical climate back home.

I took a cab from the airport to the Riverside Residence Hall in the picturesque Upper West Side of Manhattan. The cab ride through the city immediately affirmed that I was in the right place. I fell in love with the skyscrapers, the lights, the food stands on street corners, and even the cacophonous sirens.

At the residence hall, I realized most students had already created a community during the fall semester. I arrived in time for the spring semester and felt nervous about fitting in. The friendliness of fellow students quickly defused my fears. We bonded at movie and game nights, and even shared a midnight breakfast at a nearby diner. My biggest adjustment was getting used to the oh-so-famous New York City subway system. In Kenya, cars were my daily mode of travel. I slowly warmed up to the smells, the sounds, the crowds, the dancers, singers, musicians, magicians, and unpredictable train traffic. Thankfully, I eventually found the subway to be dependable, fast, and reliable, most of the time.

Of course, sometimes I feel nostalgic about life in Kenya. I often miss my friends and family. Luckily, I can see them every day via Skype and FaceTime. I've also learned to do some creative shopping in regular supermarkets in Jamaica Queens, and Harlem, where I can buy maize meal and other items used in Kenyan cuisine. I make Ugali, a dish of maize flour cooked with water, Chapatti a type of homemade bread and even Githeri, a meal of beans and corn. There are also restaurants such as Madiba in Brooklyn, where I can find some Kenyan food and drinks as well as other African delicacies.

Through clubs and organizations, I made many friends at NYIT. From the start, I joined the Cultured Couture club for fashion and art. I started as secretary and then served as the club's president for a semester. I served as a student member of the Public Relations and S.W.A.G. clubs. Don't let the name of that last one fool you. S.W.A.G is an acronym for Students Working to Achieve Greatness. It's an incredible club that encourages students to get involved in the NYIT community. I was also a student ambassador. This was an amazing position because I not only give tours, but I also get to interact with prospective students during a time in their lives that is both exciting and nerve-wracking. I had the opportunity to be an honest yet reassuring voice as I can relate to what they are experiencing.

I now consider myself a proud New Yorker. One of my friends laughed the first time I said "a buck fifty," and commented: "You're finally Americanized!" Along the way, I've learned lessons like never telling a cab driver where I'm going until inside the cab. I have also learnt not to ask anyone in Times Square for directions because they're probably just as clueless as you are. Moving to a new place is never easy, but the vibrant NYIT community made my transition to New York an amazing one.

I am quite excited to have completed my bachelor's degree in December 2014. In the past four years, I have learnt and grown immensely. It has truly been one of the happiest times of my life; however, I am excited to begin this new chapter. I will be remaining in New York for the next few years. In 2015, I will be launching my own Arts and Culture website where I will be doing book, movie, and TV show reviews. I will also be showcasing art and music, while promoting and giving a platform to upcoming artists. After that, I will be pursuing a master's degree in journalism here in New York. And then, who knows? Just keep a lookout for my byline.

Aspiring journalist Anne-Marie Gallo completed her bachelor's degree in English in December and was selected as the student speaker for the Class of 2015 at NYIT Commencement on Sunday, May 17.