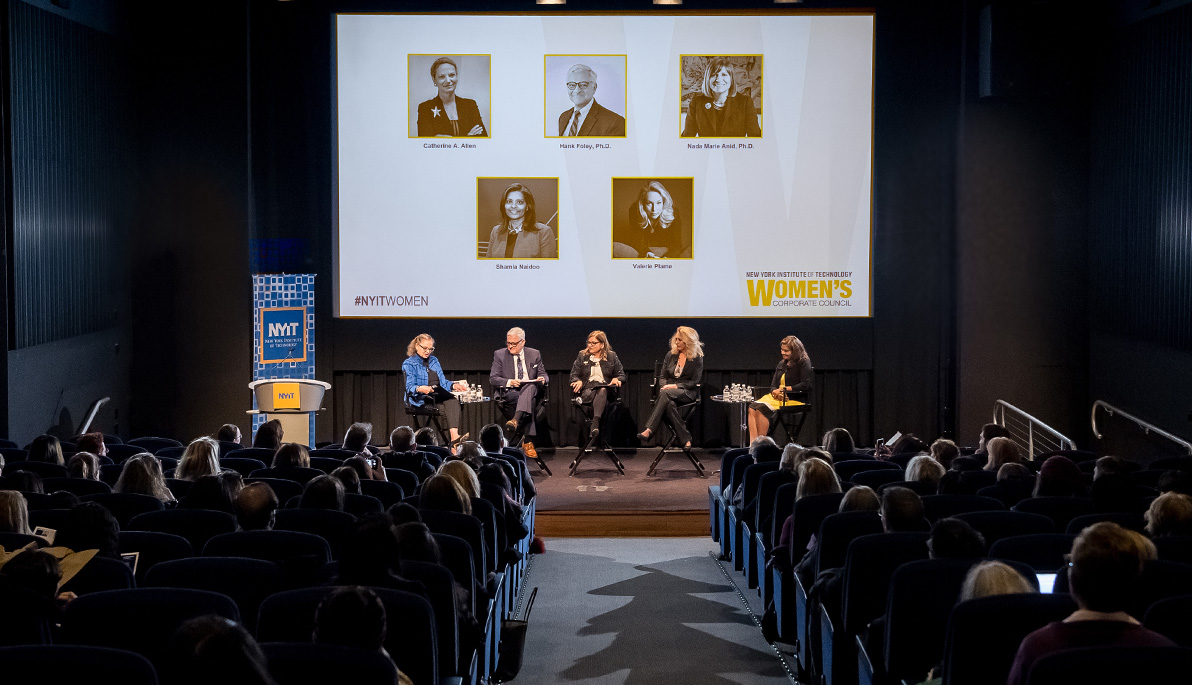 When Catherine A. Allen, New York Institute of Technology trustee and founder and CEO of The Santa Fe Group, wanted to pursue business as an undergraduate, her only option was to go into fashion design and retail—because she was a woman. “Now I’m a cyber expert…It shows you that life really is a journey. When you see opportunities, take advantage of [them].”

Her wise words were just some of those offered by speakers at the inaugural event of the NYIT Women’s Corporate Council held on March 14 at NYIT Auditorium on Broadway. The panel also featured Nada Marie Anid, Ph.D., NYIT vice president for Strategic Communications and External Affairs who, along with Allen and NYIT President Hank Foley, Ph.D., was at the core of the initiative. Guest panelists included Shamla Naidoo, former Global CISO for IBM and currently IBM Managing Partner, Global Security Services, where she’s focused on board consulting, and Valerie Plame, writer and former CIA operative.

“We want to empower and inspire women at NYIT and beyond through resources and networks in support of targeted initiatives that advance research, career opportunities, and corporate partnerships,” Anid explained.

Initial areas of the group’s focus, which were reiterated during an interactive exercise with the audience of more than 150 members of the NYIT community as well as the public, include addressing tech skills and career development opportunities; work/life balance; mentoring and networking; research on diversity and inclusion; and discussions on how to address cross-cultural and unconscious bias and bridging the gender gap.

One of the topics the panelists discussed was how others had—or had not—supported them throughout their careers. Plame related that when she hit a certain point in her career, she looked for someone higher up at the CIA who could help her advance—a sponsor. “A mentor is someone who is much more informal—they’ll offer you advice,” she explained. “A sponsor is the person you want in the room to talk about your promotion—the person who will advocate for you.” Plame never found either, but she drew on the experience later in her career. “Maybe because of my disappointment in not finding a mentor, I made it a point when I was [in a position of responsibility] to turn around an extend a hand…The minute you are in a position to offer someone support behind you, do so.”

President Foley spoke about the importance of being a good mentor to others who don’t share your background. “Mentoring requires thoughtfulness and investing time in getting to know the person...When you get to a place when you have influence, you know what the usual tropes are [such as placing an unjustified level of scrutiny on someone]—and you know not to fall into them.”

“Strong leaders inspire ordinary people to do extraordinary things,” said Naidoo. “I’m very fortunate I’ve had strong leaders in my life that actually helped me to do exactly that.”

All the panelists agreed that, despite difficulties women may face when advancing their careers, taking risks and having integrity will only benefit their progress. “I haven’t had mentors, but I have had heroes—like my parents—who taught me to have no fear, and my daughters who remind me that ‘I can do it’ and to ‘always be myself as there’s no reason to ever be fake,’” said Anid.

Naidoo also related how taking risks was key to her career success. Growing up in Africa, she was one of the few people from her town to pursue an education and choose to work in an office. Later, she earned three degrees, all while working full time. “As women, we bring different things to the table—we bring different skills, life experiences, and strengths. And sometimes we have to be brave enough to stand up for where we are different,” said Naidoo. “We don’t always have to act like our male counterparts—we don’t always have to make decisions the way they do…We shouldn’t ignore our differences, because what makes us different, makes us better together.”

“Think of your career as a journey, it’s not a destination,” summed up Allen. “It’s continuous learning and being open and curious about the world and continuing to learn...Take those risks.”