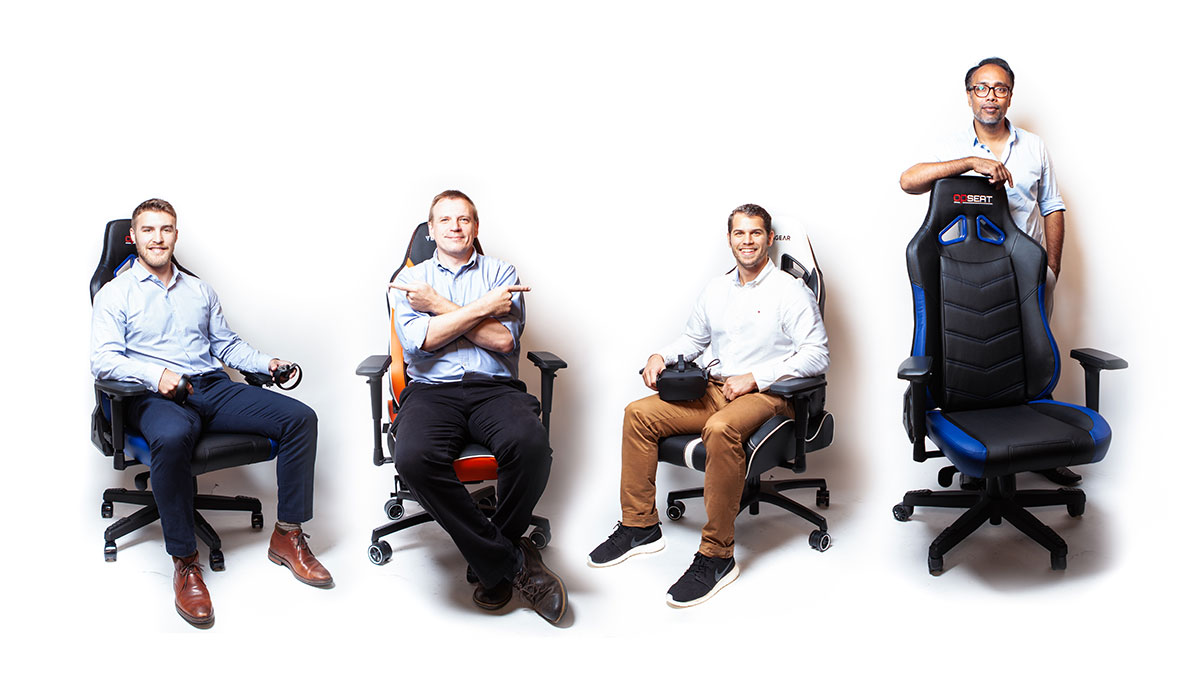 Pictured from left: Dylan Carmichael, Assistant Professor Aleksandr Vasilyev, and Ivan Bandovic pose with Dost Khalique who helped the team put together their initial submission to the 2018 ASN Innovations in Kidney Education Contest.

The software is the brainchild of Vasilyev, who had been working on the idea for about three years as a way to teach students about the inner workings of the kidneys as well as a way for educators to track the progress of their students. Bandovic and Carmichael, who are both in the Medicine Scholars program at NYITCOM, which requires them to spend an extra year doing research and teaching, came on board in January 2018 after they were matched with Vasilyev.

“Nephrology, and in particular the physiology [of the kidneys], is a very difficult field to understand,” said Bandovic. “Our theory is that learning nephrology in a completely immersive universe will help [the student] conceptualize and memorize more efficiently.”

With Nephro360, students who have a hard time visualizing kidney function or what happens to the organ when a drug is added will see it all unfold before their eyes, thanks to the use of VR technology. “This software will give them the opportunity to see these processes all around them,” said Carmichael. “Even students who think they may understand everything can get a deeper understanding from watching how things happen and even make them happen themselves. This is another reason why this software is unique. It gives the student the power to control these processes.”

The software is based on a gaming environment. To build it, they used three tools: Blender (a 3-D modeling program), Medium (an Oculus Rift-based 3-D modeling system), and Unity (a game development environment).

With their program, students will be able to play around and alter physiological parameters. “Students learn about kidney function through gaming activities,” explained Vasilyev. “The user is asked to solve problems in a virtual reality (VR) space, from solving simple anatomical puzzles to arriving at a correct diagnosis during virtual office visits where they’re presented with cases built around kidney pathology.”

Vasilyev wanted to design a VR “game” in such a way where it is presented to each student at their level. “There is no technology that allows you to deliver individualized learning—until now. I’ve long had an interest in 3-D technology and I have some background in programming.” Bringing the two together made perfect sense.”

Bandovic and Carmichael were both excited about working on building Nephro360. However, neither had programming experience. Nevertheless, they delved into the project head first. Learning as they went, the students did the majority of the work on the coding and created all of the 3-D kidney models. “It started off somewhat slow,” Bandovic said, “but as we progressed, things began to take shape as the different components of the software started to materialize.”

As Nephro360 became a usable teaching tool, the team decided to submit their creation to the 2018 American Society of Nephrology (ASN) Innovations in Kidney Education Contest. “I submitted a similar idea three years ago, but it didn’t go very far,” said Vasilyev. But this time Bandovic and Carmichael knew they had a something special on their hands. In August 2018 the team learned that Nephro360 was chosen as one of the three winners. They will receive their award during the ASN Kidney Week 2018 Annual Meeting in San Diego, Calif., on October 27.

“I had a good feeling about it, to be honest,” said Bandovic. His professor, however, was more cautious. “Ivan and Dylan were very enthusiastic about the project. I probably wouldn’t have submitted it, but they pushed me,” said Vasilyev.

The team is still developing the software, but have high hopes for its future once it’s complete. “It’s such a valuable tool,” said Carmichael. “It can help students understand the basics of renal physiology and pathophysiology so that anyone who doesn’t have a full grasp on these processes could benefit from it.”

In November 2018, they plan to pilot the tool with second-year NYITCOM students. Ultimately they hope that this project will lead to a paradigm shift in the approach to the training of medical students.

The Future of Medicine is Interdisciplinary

“Nephro360 is a pilot project which has the potential to jumpstart a revolutionary way of learning medicine, dentistry, and other fields in which virtual reality has a place in training,” said Bandovic.

As medicine continues to incorporate technology in many different ways, including in telemedicine and VR offices, this experience will give the future doctors an edge when they apply for residencies.

“This project will help make them more competitive,” said Vasilyev. “It’s a unique skill and this will help them be successful in the future.”

Bandovic said, “Dr. Vasilyev’s brightness helped us hurdle over incredible challenges. My experience working with him proved to me that I can master skills that aren’t blatantly correlated with medicine, but which will certainly be sought after as we venture through the technological age of the world.”

Vasilyev, humbled by his students’ praises, took a moment to recognize everyone who played a role in the development of Nephro360. “This project would not go very far without the enthusiastic support of NYITCOM leadership and our academic technology group that helped us acquire necessary equipment,” he said. “Our special thanks go to Dost Khalique [IT manager of academic technologies in NYITCOM] who also helped us put together the initial submission.

“It cannot be underestimated how valuable the cross-pollination of ideas is across NYIT, including the College of Arts and Sciences, the College of Engineering and Computing Sciences, the School of Architecture and Design, and other schools,” he added. “We would probably not be here today if Robert Smith, associate professor of digital art and design, did not [show us] Oculus Medium when it was first released just over a year ago. This new tool emboldened us and jumpstarted a number of projects, including Nephro360. This free exchange of knowledge and ideas will continue to benefit the NYIT community in all of its bold initiatives.”