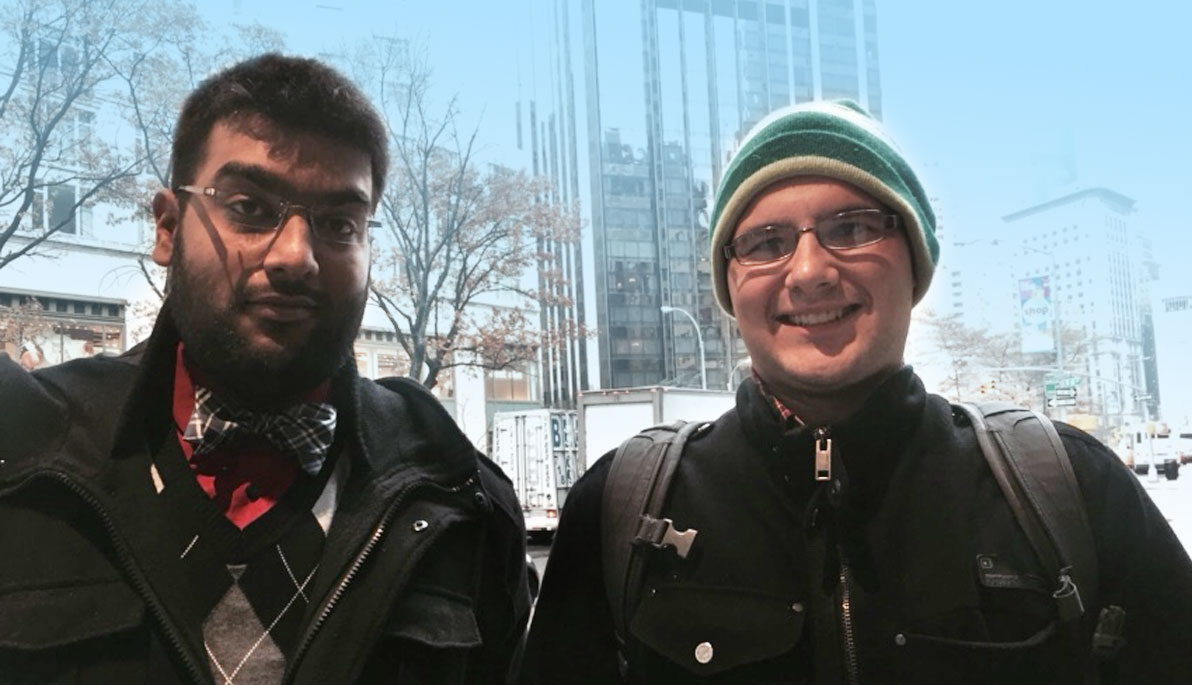 Electrical and computer engineering students Mohammed Akram and Stefan Pougatchev are MakerState fellows who share a passion for science, technology, engineering, and math (STEM) education and an innate curiosity of understanding the mechanisms of how things work. MakerState is an educational organization that advocates for kids aged 6 to 18 to learn about and gain skills in STEM subjects. Over lunch from Melissa's Gourmet Deli near NYIT's Manhattan campus, they talked about their experiences.

The Box: How did you meet?
Pougatchev: In Differential Equations class in fall 2014.
Akram: We saw each other again at the STEAM Career Fair in October 2014. I was working at the MakerState recruiting table with the organization's founder, Stephen Gilman, and we talked more there.

The Box: What do each of you do for MakerState?
Akram: I'm on the curriculum development team and work with other Maker fellows to help them to create and organize their curricula. I've also taught an afterschool program at P.S. 452 and Columbia Grammar Prep, and ran a booth at a huge MakerState fair in Flushing, N.Y.
Pougatchev: I work on school partnerships, mainly for grades K-5.

The Box: How did you become interested in engineering?
Pougatchev: Since I was young, I've been taking things apart and putting them back together.
Akram: Me, too. I remember one time my family bought an armoire. My Dad, cousins, and uncle couldn't figure out how to put it together. They went out, and my Mom stepped in and slapped it together in an hour and a half. They came back and asked, 'How did you do it?' She said, 'It's just a box.' I was 4 or 5 years old then and helped her. Since then I've been putting things together. I always wonder: 'If I dissect it, what will it look like inside?'
Pougatchev: I have a story like that, too. I used to ride my bike everywhere as a kid. My Dad didn't want me to ride at night. I was 12 when my Dad took apart an old flashlight and made a blinking light out of it for my bike. It made me think about how electricity flows from battery to flashlight.

The Box: Why do you advocate for young students to study STEM subjects?
Pougatchev: I really believe in STEM education. That's why I got involved in MakerState. We focus on project-based learning, and I think that's the future of education in the United States.

The Box: When you're not working on engineering projects, what are you doing?
Akram: I'm the people "gatherer" among my friends. I enjoy biking and playing all sports except soccer.
Pougatchev: I go rock climbing and snowboarding.

Location: 1879 Broadway, between 61st and 62nd Streets, facebook.com/MelissasGourmet
Food: Choose from sandwiches, salads, yogurt, coffee, snacks, and more.
Prices: Cheap. You'll easily spend less than $10 on lunch. Show your NYIT ID and get a discount.
Lunch scene: Casual and busy. It's next door to the NYIT Auditorium on Broadway.
Recommended dishes: Tuna salad sandwich topped with lettuce, tomato, and American cheese on a roll ($6); make your own salad ($6.95).