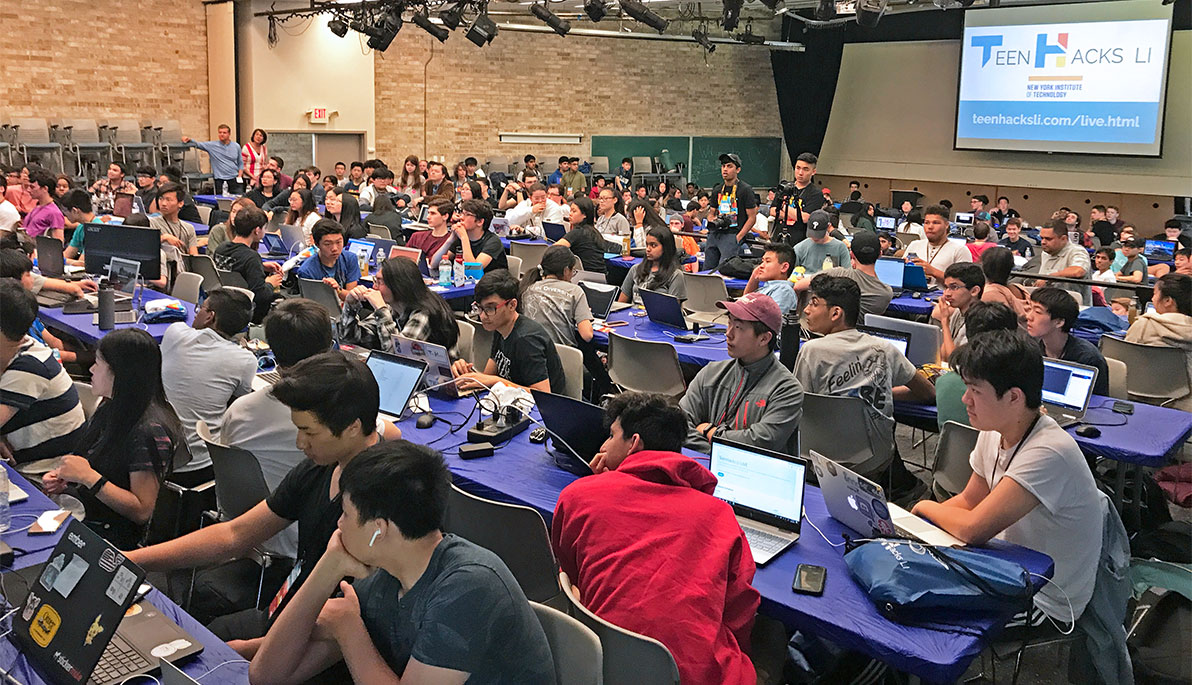 Pictured: Nearly 200 high school students from the Northeast (and as far as Michigan) visited New York Institute of Technology on Memorial Day weekend for a hackathon organized by TeenHacks LI.

Nearly 200 high school students from across the Northeast and beyond engaged in a 24-hour TeenHacks LI hackathon on Memorial Day weekend at NYIT-Long Island. Held in Salten Hall and Harry Schure Hall, the hackathon challenged participants to work together in teams and develop solutions for problems they identified using a variety of software and hardware tools.

The event kicked off Saturday at 1 p.m. with welcome remarks from the leaders of TeenHacks LI, a nonprofit run by Long Island high school students that organized the hackathon, as well as NYIT Provost and Vice President for Academic Affairs, Junius Gonzales M.D., M.B.A., and sponsors DealerTrack and TIBCO.

“The turnout at this hackathon was truly impressive,” Gonzales said following the event. “It was inspiring to see so many high school students engaged in a creative exploration of technology across a holiday weekend.”

Also delivering opening remarks was Josh Lafazan, legislator for the 18th District of the Nassau County Legislature, who encouraged teenagers to harness technology as a means to assist needy populations such as the elderly and the homeless.

“I want you to think about how technology can be leveraged because government can be a force for good for so many vulnerable communities in our area,” Lafazan told attendees. Through technology, he added, “You can make a difference and you can make a lot of money doing it.”

When reached for comment, Nassau County Executive Laura Curran said of the hackathon: "History shows us that great innovation and discovery can happen at any age. Now more than ever, our future depends on the next generation’s ability to collaborate to harness creativity in order to solve some of the most intractable challenges we face. Hackathons like these are vital because they promote breakthroughs in scientific innovation but also inspire our young people to pursue careers in STEM.”

Projects developed during the hackathon included an app that facilitated group meals, another that streamlined charitable giving, a website that raised awareness of homeless youth, a smart wheelchair prototype, and a spell-casting video game that incorporated real-time hand movements using a Leap Motion sensor device. Prizes ranged from Bose wireless speakers to laptop cases and Bluetooth keyboards to $500 scholarships to New York Institute of Technology. 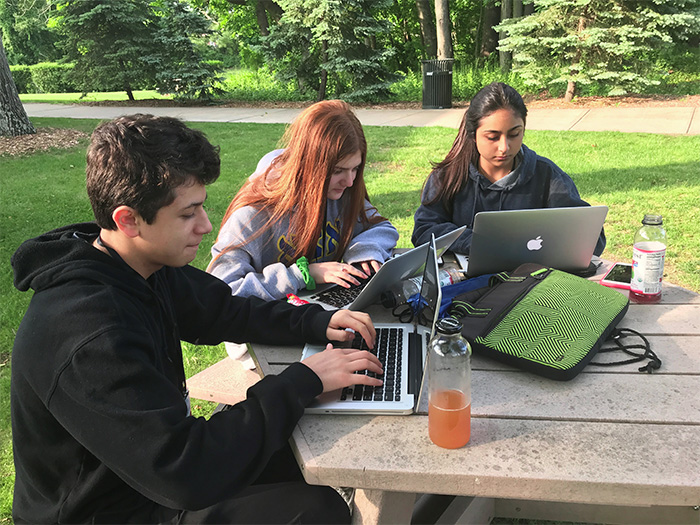 Collaboration and creativity are key to hackathons, where students develop their computer science skills while learning the value of teamwork.

“At the start, I heard many of our attendees explain how they have no ideas for a project,” said Wesley Pergament, a high school student from Jericho, N.Y., who co-founded TeenHacks LI with fellow high schooler Jeffrey Yu of Roslyn, N.Y. “In the end, we had over 60 submissions all over the course of 24 hours. It’s amazing to see how students can get inspired by our community and workshops as well as test what they think can be possible.”

Some entries were particularly timely. In recognition of World Ocean Day on June 8, for example, a team of girls designed a video game that educates players on how to help sea turtles. “We wanted to raise awareness for marine environments,” said ninth-grader Snigdha Roy of Mount Sinai High School (N.Y.), who designed the game with teammates Clara Robert, Katelyn Zheng, and Charlena Li using a block-based coding language called Snap!. Sea turtles, she noted, keep populations of jellyfish in check, which in turn helps maintain the fishing industry.

Pergament and Yu founded TeenHacks LI in 2018. They wanted to bring 24-hour hackathons—where collaboration and creativity are key—to Long Island high schools. “Having attended and organized various other hackathons across the tri-state area, the experiences I’ve had at them changed my life,” said Yu. “From the friends I’ve made to the projects I’ve created, hackathons have introduced me to a community unlike any other.”

Students also had the opportunity on Saturday to attend workshops on topics such as web development and the business of coding, and later into the evening participated in team-building activities, karaoke, and other fun activities. Designated sleeping areas in Harry Schure Hall allowed students to grab a few hours of rest before continuing their work Sunday morning.

Following the 1 p.m. Sunday deadline for students to complete their projects, teams had three minutes to present their work to panels of judges. Prize categories included first, second, and third place, in addition to best entries for “Doer-Maker” (for the most out-of-the-box thinking), User Interface/User Experience, Hardware Hack, Beginner Hack, and People’s Choice Award. 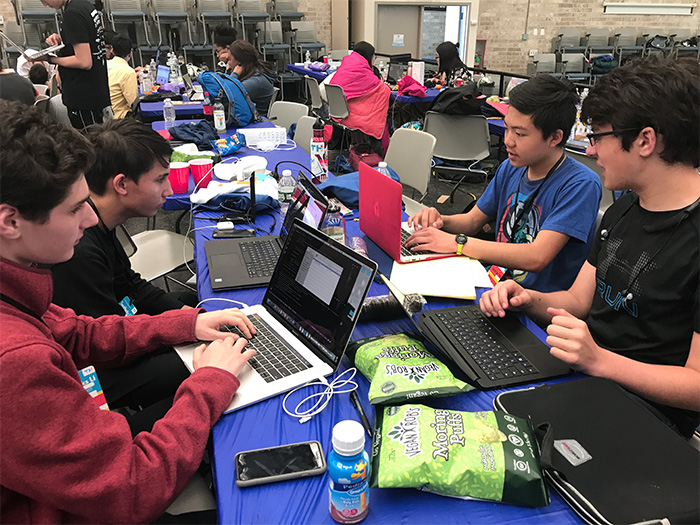 The BiParse team included students from Boston and Providence, R.I., who won first place for a Google Chrome extension that uses a neural net to recommend stories related to a topic. This solution offers users more balanced information from a variety of media sources.

First place was awarded to “BiParse,” a team that included three students from the Milton Academy near Boston and another from the Wheeler School in Providence, R.I. Their winning entry was a Google Chrome extension that uses a neural net to recommend stories related to a topic. This solution offers users more balanced information from a variety of media sources.

“We noticed there was a lot of bias in the media and people are very polarized in their political views,” said 10th grader Aaron Lockhart, who worked with fellow BiParse teammates William Kopans, Sebastian Park, and Timothy Colledge. “We wanted to help address that problem.” The group utilized JavaScript, HTML, CSS, and Python to create the project’s machine-learning algorithm.

In addition to demonstrating their software and hardware prowess (all while working under a deadline), hackathon participants learned the value of teamwork and coordination. “Collaboration is such an important skill for students to learn at a young age,” noted Pergament. “Not only do they improve their computer science skills, but building a project requires coordination among all team members. This necessity fosters communication, which is a widely sought-after skill in the technology world.”

“TeenHacks LI has done an amazing job bringing the thrill of coding to Long Island’s youth,” said Nada Marie Anid, Ph.D., vice president for strategic communications and external affairs for NYIT. “New York Institute of Technology is delighted to have served as the site of their biggest 24-hour hackathon of 2019 as we welcomed programmers, designers, builders, and developers from all over the region to our Old Westbury campus.”

The Memorial Day weekend hackathon was the second that TeenHacks LI has held. Its first had the capacity for only 60 participants at a school in Roslyn, N.Y. By having this one at New York Institute of Technology’s Long Island campus, Pergament and Yu were able to leverage the university’s robust facilities and accessible location off Northern Boulevard.

“New York Institute of Technology is the home of doers, makers, and innovators who want to reinvent the future,” said NYIT President Hank Foley, Ph.D. “What better school than New York Tech to host a TeenHacks LI hackathon? I congratulate all of the student organizers on how well they’ve brought technology and innovation to Long Island high schools in a way that makes coding fun, accessible, and highly educational.”

“By having TeenHacks LI at NYIT, it has given the participants a glimpse into what a big college hackathon is like,” added Yu. “From the state-of-the-art workshop facilities to the beautiful academic quad, participants had plenty of space to move around and enjoy themselves. It ended up being one of the best hackathon experiences of my life.”