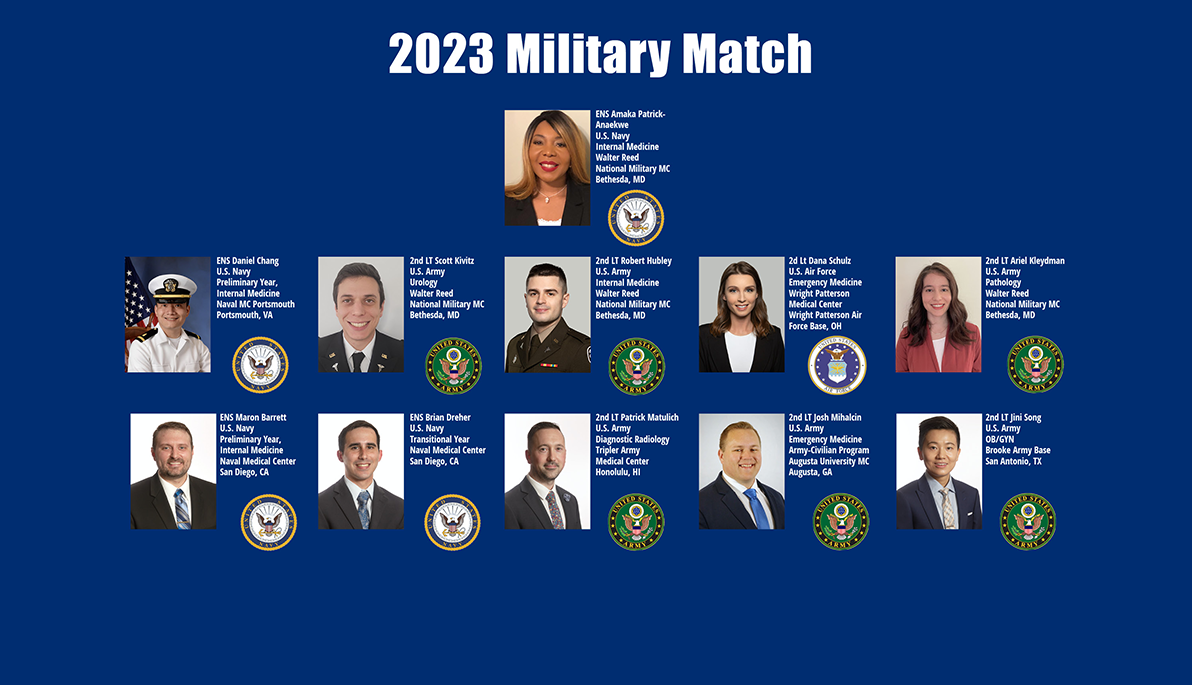 Twelve future physicians from the College of Osteopathic Medicine’s (NYITCOM) Class of 2023 have matched into U.S. military residencies.

While the “civilian” match will take place on March 17, 2023, medical students who have committed to military service learned of their residency matches in December, as is customary.

After graduating from medical school this spring, NYITCOM’s newest military physicians will begin their Graduate Medical Education (GME) in conjunction with service to their country. This spring, they will take the military oath of office at NYITCOM’s 2023 hooding ceremonies.

“First and foremost, I am a man of service. This is one of the reasons I was driven to pursue medicine in the first place. As an aspiring physician, I sought ways to be the most impactful with my education and desire to serve,” says NYITCOM-Arkansas student Patrick Matulich. “It is with great honor and pride that I have been matched with Tripler Army Medical Center in diagnostic radiology. I am grateful for the support of my community, friends and family, the U.S. Army, and NYITCOM.”

Licensed physicians entering the armed forces typically begin their rank as captain or major in the Army and Air Force and lieutenant or lieutenant commander in the Navy, though ranks can vary based on education, training, and experience. Officer training for military physicians ranges from two to 14 weeks based on the branch in which they serve. Most military physicians enlist for a minimum of three years.

Military physicians deliver healthcare services to military personnel and their families and work in various settings, including hospital ships and international medical centers. Physicians enlisted in the military may also participate in international relief and humanitarian efforts, helping to care for the victims of natural disasters and other events requiring medical stability operations.