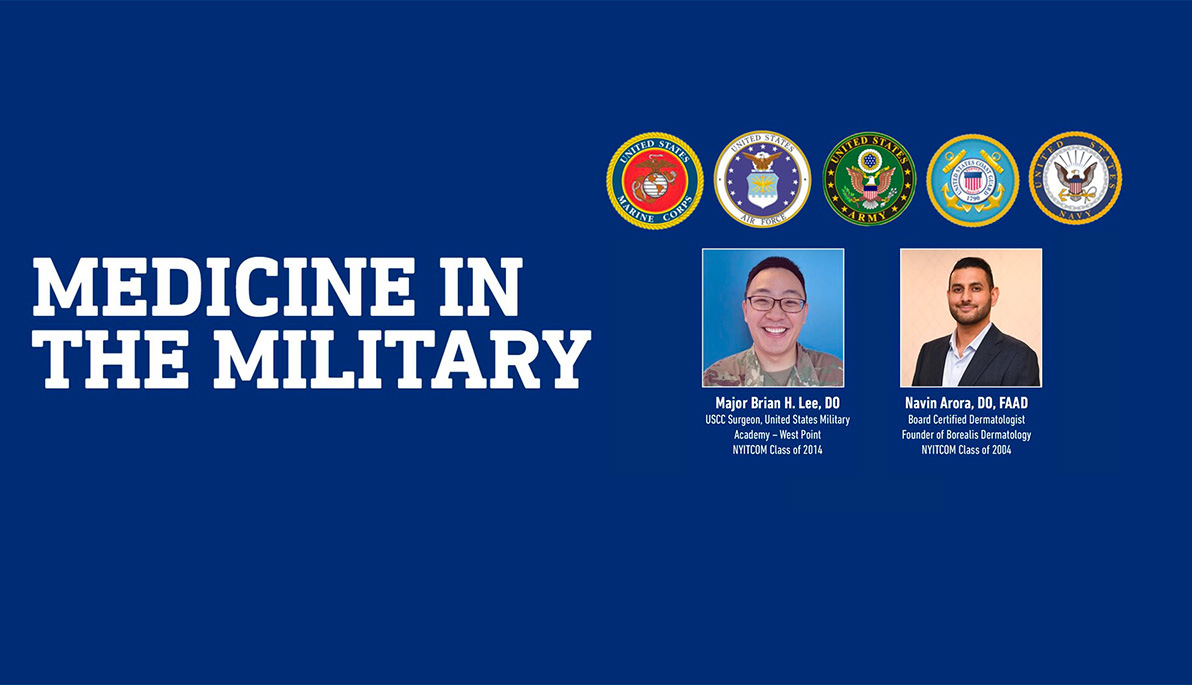 What is it like to serve as a military physician?

That’s what students from the College of Osteopathic Medicine (NYITCOM) learned from medical school alumni at “Medicine in the Military.”

The virtual Q&A featured a U.S. Army physician currently serving at West Point and a former Army physician who is now in private practice in Long Island. Both are NYITCOM graduates who shared their experiences in the system known as “military medicine.”

Arora is a dermatologist who completed his residency at Walter Reed National Military Medical Center in Bethesda, Md. He experienced 12 years of active duty in the U.S. Army, including service in Iraq and Hawaii, and now has a private dermatology practice in Garden City, N.Y.

Lee completed his family medicine residency at Fort Belvoir in Fairfax County, Va., before serving three years at Camp Humphreys in South Korea, which is home to the Army’s busiest airfield in Asia. Today, he serves as a brigade surgeon at the United States Military Academy West Point.

Many medical students who attended the Q&A have already committed to military service through the Armed Forces Health Professions Scholarship Program (HPSP). The Army, Navy, and Air Force all offer HPSP scholarships, which pay tuition and stipends for medical students who agree to serve after graduation. NYITCOM currently has 30 HPSP students, including 17 with the Army, 10 with the Air Force, and 13 with the Navy.

Among NYITCOM’s Navy HPSP students are AMOPS chapter presidents Kaitlyn Stasiewicz (NYITCOM-Arkansas) and Jacqueline “Jace” Bridges (NYITCOM-Long Island). Throughout the event, Stasiwicz and Bridges relayed questions from students, including how medical training in the military system differs from civilian standards and how the experience will impact their careers. Students also inquired about residency matches and other training opportunities, frequent moves and location options, and the military’s famous bureaucracy.

While explaining expectations and giving examples from their own experiences, the alumni remained positive about their opportunities to serve as military physicians. They elaborated on the specific benefits of being trained by the U.S. armed forces, including:

Lee said, “It’s not for everyone, but I love what I do. Army medicine is a great opportunity, a great platform if you want to put yourself out there and serve our nation.”

After sharing experiences from his longtime Army career, Arora said, “Being your own boss [in private practice] is great, but you only get prepared for that from the great experiences you go through in the military.” He also noted that he met his spouse in the military.

“Finding someone to ask can be a challenge, which is why we connect you with these alums,” said Karwoski. “Someday, you will be invited back to speak to another generation of students.”