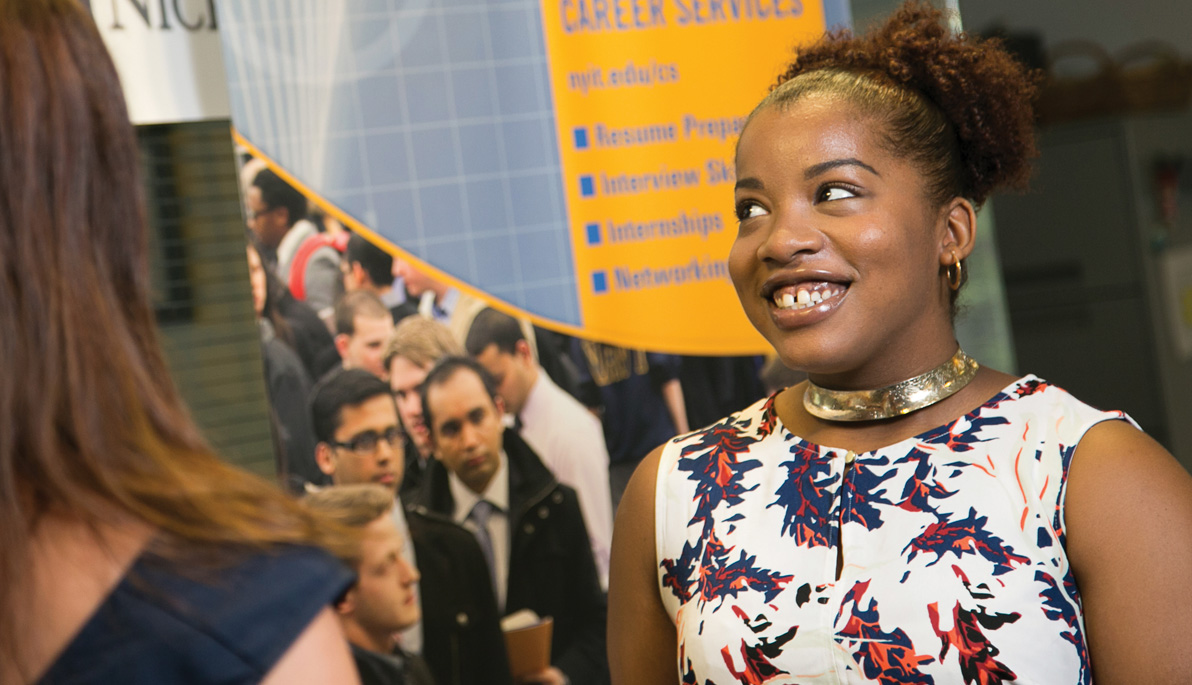 After joining NYIT’s chapters of the National Society of Black Engineers, students find unexpected opportunities in both their careers and their lives.

In our current economy, there’s good news and bad news for engineering students. The good news is that, according to the U.S. Department of Labor’s Bureau of Labor Statistics, the median annual wage for engineers is more than double the median annual wage for all occupations, but the not-so-good news is that the growth rate for engineering jobs is slower than average. With such a competitive job market, colleges and universities have a major challenge helping engineering students find jobs and internships. Add to that the fact that engineering has historically been a profession largely comprised of white males, and an even bigger challenge presents itself.

Enter the National Society of Black Engineers (NSBE), a nonprofit with the mission “to increase the number of culturally responsible black engineers who excel academically, succeed professionally, and positively impact the community.” Since its founding in 1971, NSBE has grown to include more than 30,000 members in precollege, college, and professional/alumni chapters in the United States and abroad.

Two of those chapters are on NYIT’s New York City and Long Island campuses. “NSBE helps the students develop professionally,” says Amy Bravo, senior director of international and experiential education at NYIT. Bravo sees firsthand the benefits of participating in NSBE. “They take their meetings very seriously, setting goals for themselves on campus and in their careers.”

When Dolu Obatusin (B.S. ’12) transferred to NYIT to study biomedical engineering, he and several other NYIT students relaunched Manhattan’s NSBE chapter. “It’s a very good pipeline for creating opportunities for students,” says Obatusin, who was an NSBE member before transferring to NYIT. “It can provide internships and create a community for students to get academic help and professional exposure.” 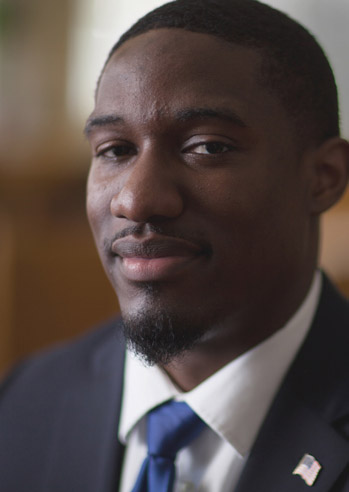 When I gave my opening speech, I challenged the room full of engineering students to join…Anyone can push the mission.

Part of NSBE’s founding ideology is that the members give back to the community. Obatusin was an assistant site director in Houston for NSBE’s SEEK (Summer Engineering Experience for Kids) program. “It was an eye-opening experience. I helped expose students to STEM in the way I was when I was in high school and did programs at Cooper Union. I felt like I had come full circle.” After graduating from NYIT and getting a master’s degree at Cornell, Obatusin worked at the War Related Illness and Injury Study Center at the Veterans Affairs Hospital. Now he’s pursuing a Ph.D. at Georgia Tech. And in the spirit of NSBE, he still gives back. “Any time I can, I try to contribute somehow.”

Bravo notes that the NSBE programs inspire students to get involved in STEM at a young age. “It brings out the playful aspect of engineering early on so it’s not intimidating,” she says. “They start to feel comfortable with the language and the field of engineering.”

Vanessa Newman (B.S. ’16) served as president of NYIT-Manhattan’s NSBE chapter last year. She says NSBE has made her “more outspoken and likely to take risks.” As a student, she taught children in NSBE programs and developed a STEM after school program for three elementary schools in Jamaica, Queens. Then, after graduating, she launched a similar program in Harlem. As part of the initiative, Newman has taken on the responsibility of training NYIT students to deliver STEM programming in the schools five days a week. “Her work engages NYIT students in service to the community while inspiring future STEM professionals,” says Bravo.

Mentorship within the club is a big part of the NSBE experience. Newman, who has since become a mentor to others, credits fellow engineering student Omari Adams with getting her involved in her freshman year. Adams discovered NSBE in high school through an outreach program at Brooklyn Tech. As a freshman at NYIT-Manhattan, he volunteered for NSBE activities, including at STEM Day, where kids from New York do activities in conjunction with the School of Education’s Kids for College program. Adams FEATURE also works part time at Sikorsky Aircraft (a job he got through an NYIT alumni connection) and commutes to campus twice a week for classes. “It has pushed off my graduation date,” he says, “but the experience is worth it.”

As NSBE has grown over the past decades, its doors have widened. “Although in name it says ‘black engineers,’ you don’t have to be black to join,” says Bravo. “NSBE encourages diversity on all levels.” “The basic understanding is that minorities need help in this field,” adds Newman. Last year, members of Newman’s chapter were 40 percent black, 40 percent Caribbean, 15 percent white, and 5 percent Asian.

When Will Udoh (B.S. ’14, M.S. ’16) was president of the Long Island NSBE chapter, one of his goals was to diversify the organization. “When I gave my opening speech, I challenged the room full of engineering students to join,” says Udoh. “It’s not the color of your skin that gets you into our organization.”

Udoh partnered with campus organizations such as the Society of Women Engineers, the Society of Automotive Engineers, and the Institute of Electrical and Electronics Engineers to broaden his chapter’s reach. “Anyone can push the mission,” he says. “There was an awesome response from the Caucasian, African American, Hispanic, and Asian communities.” Udoh worked in NSBE after-school programs for high school and middle school students. And while he was interning for Northrop Grumman in Virginia, he taught at a SEEK program nearby. “Kids learn programming and teamwork; they brainstorm; they create solutions to problems. At such a young age, they learn faster and develop skills.” A student-athlete who played basketball, Udoh is used to being a team player. He even established a postgraduate professional chapter of NSBE when he was getting his master’s degree. After interning for Boeing, Udoh won a place in the company’s prestigious Engineering Career Foundation Program. He’ll work in four locations over the next two years. Round one: the Space and Intelligence Systems group in El Segundo, Calif. 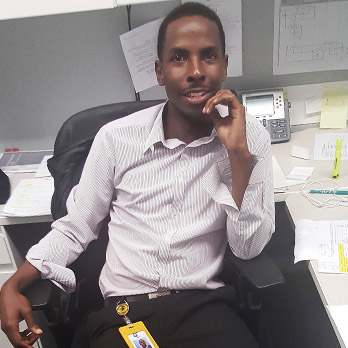 Steavian Sampson (in his office at Florida Power and Light Company)

Every year, NSBE holds a nationwide convention to bring chapter members together to network, attend seminars, and meet with potential employers. The 2016 convention, held in Boston, Mass., saw record-breaking attendance of more than 13,000 members. “It goes beyond networking and has the feeling of a family reunion for black engineers,” says NSBE National Chair Matthew Nelson.

Steavian Sampson (B.S. ’14) helped re-establish the Manhattan chapter and started taking students to NSBE’s annual convention. “The first time we went, we weren’t expecting to get pulled in for interviews,” he says. To their surprise, many of the students ended up meeting with Fortune 500 companies. “Now, if you go, by the time you are a junior, you’ve gotten a lot of exposure and maybe internships.”

As an undergraduate, Sampson participated in SEEK programs in different cities. First he was a mentor, then an assistant site director, and finally a site director. Being an NSBE member also directly impacted Sampson’s education: He received four NSBE scholarships that helped him pay for college. He now works as a resource assessment and planning engineer at Florida Power & Light Company. 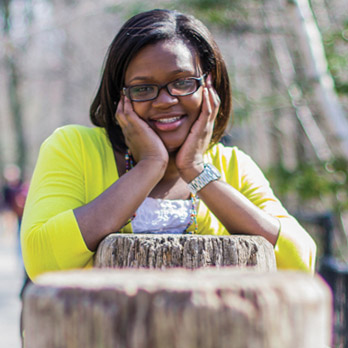 Joyce Onore (B.S. ’10), a senior associate at Pricewaterhouse Coopers, credits NSBE’s annual convention with helping her get her full-time job after graduation. Onore majored in engineering management and served as secretary, president, and president emeritus of the Long Island chapter. During her junior year she interviewed at the conference with Accenture. When she didn’t get a position, she followed up with her interviewer for advice about what she could have done better. She contacted him again before the next conference and he told her of a system analyst position. She got the job. “NSBE members help each other with job opportunities, academic excellence, and professional success,” Onore says. “As a woman, my opinions were always welcomed and valued. I was never intimidated.”

“Student involvement in NSBE brings out their critical thinking,” says Felix Fischman, visiting professor of engineering and computing sciences and faculty advisor to the Manhattan chapter. “They get to work together outside of the classroom. They learn teamwork, how to get along, and how to communicate without a professor.”

John Katt (B.S. ’16) agrees. “NSBE is very instrumental in fostering education and networking outside of education,” he says. At NYIT, Katt coordinated NSBE events outside of the campus with other NSBE chapters. One of them, the UJAMMATHON, was dedicated to improving communities through technology, finance, and collaboration. “It was filled with tech people, legal people, finance people, community activists,” says Katt. “Everyone at the table was trying to find solutions for disadvantaged communities.” At the convention, Katt interviewed with companies like Cisco and Google; he ultimately accepted a position as technology and development coordinator at the New York City Office of the Public Advocate, an office he worked with throughout college.

Leaders At the Ready 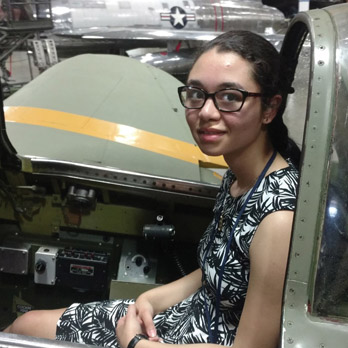 Ariana Rennie and Scott Paillant are the new generation of NSBE leaders: the 2016–2017 presidents for the Long Island and New York City chapters, respectively.

Rennie joined NSBE her freshman year because she knew the organization valued diversity and would provide opportunities for scholarships, networking, and internships. “As a female, ethnic minority and a mechanical engineering student, NSBE provided the perfect platform for my future career goals,” she says. Through NSBE, Rennie received the Executive Leadership Council (ELC) and Praxair Inc. scholarships. “I feel very fortunate to experience firsthand the benefits of this organization.”

Paillant says that joining NSBE has broadened his perspective and made him realize the extent of the community he is part of. When he interned in San Francisco for a startup, he met West Coast members of NSBE. “It really brings home that we are all in this together,” he says. “I just didn’t realize how helpful NSBE could be with academics, fitting in, leadership, and expression. It makes you grow as a person.” But Paillant, like the other NSBE members at NYIT, is not only thinking about what NSBE can do for him. As the organizer of several NSBE events, he is very involved in educational programs for elementary and high school students. “The NSBE community is important. But helping people is even more important.”