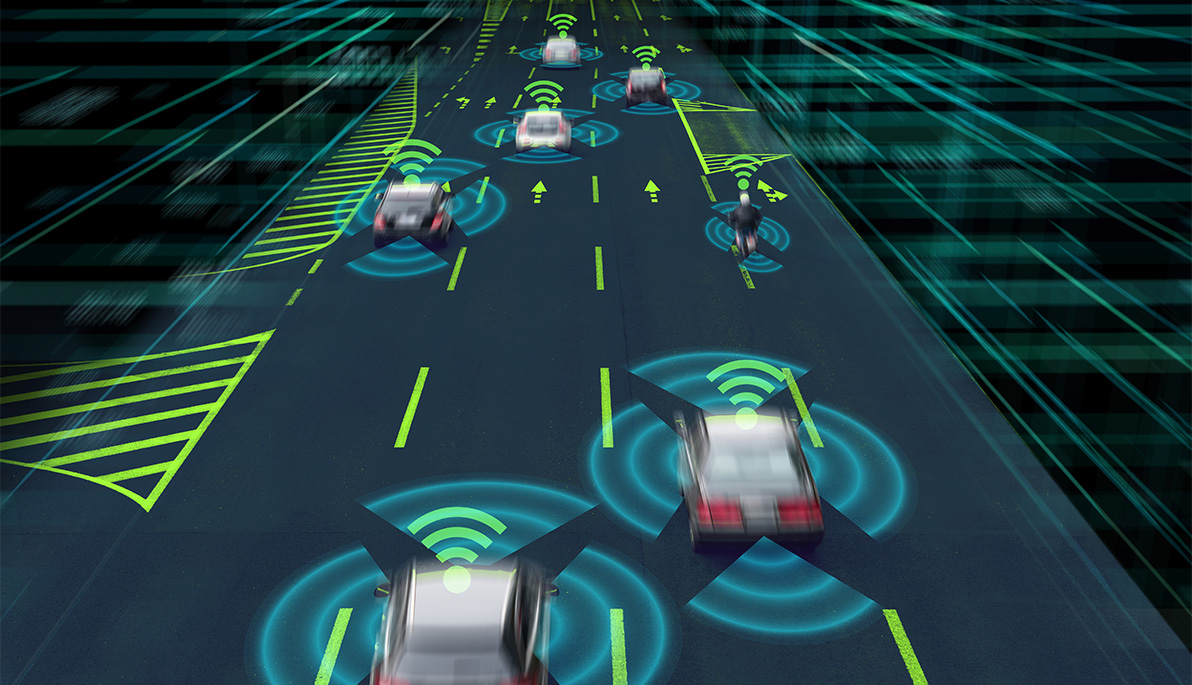 When driving, have you ever received a message through your car’s navigation system that turned out to be false, such as warning of a traffic jam or detour ahead that never materializes?

These messages are intended to help people make informed decisions when driving, but how can drivers be sure the information is accurate and can be trusted? This very question is the basis for research conducted by Wenjia Li, Ph.D., associate professor of computer science and computer science graduate student, Chenyue Zhang (M.S. ’20), with a team of researchers. In a paper published in IEEE Internet of Things Journal, the researchers propose a novel solution to evaluate the trustworthiness of such messages through an artificial intelligence-enabled trust management system (AIT) using deep learning algorithms and blockchain technology, ultimately intended to enhance the safety, security, and efficiency of drivers’ road trips and of the transportation system overall.

According to the National Highway Traffic Safety Administration, vehicle-to-vehicle communications technology is a promising way to combat vehicular deaths, ease traffic, and improve the environment by alerting drivers of potential hazards such as a crash. By 2025, estimates say there will be more than 470 million connected vehicles on the roads in the United States, Europe, and China.

Today, most alerts that drivers receive are from a centralized source like the Department of Transportation (DoT) and can largely be trusted. If there is a problem with these messages, it is often due to lag time. Drivers may already be stuck in terrible traffic due to construction or an accident, for example, when the message arrives, and too late for the driver to make an informed decision on another route.

In as few as five years, however, Li says that vehicles equipped with the appropriate hardware and software, such as those following the Cellular V2X and Dedicated Short-Range Communications (DSRC) standards, will receive alerts from other vehicles or Roadside Unit (RSU) equipment installed at a traffic signal or toll plaza. The open nature of connected vehicular networks will increase the delivery and timeliness of the messages, but also increase the likelihood that the message may not be trustworthy, or worse, may be a security threat. “A driver or autonomous vehicle can be malicious or selfish, or a system can simply malfunction, sending false messages so that other drivers consider detouring from a specific route,” Li said. This kind of action can be motivated by personal interest as much as by more nefarious intent, including hacking and other criminal activity. In any case, these kinds of false traffic messages disrupt vehicular traffic flow.

How the AIT System Works

In an AIT-enabled trust system, a vehicle will sense other vehicles and then generate and exchange traffic-related messages with them; the messages are then validated by nearby vehicles. RSUs monitor real-time traffic and send traffic alerts back to the control center so that those alerts can be disseminated to drivers on the road.

As vehicles receive and validate messages from others, they will establish and manage their trust in the information being shared, which is enabled by utilizing a deep learning algorithm. Once a vehicle identifies vehicles sending untrustworthy messages, it reports them to a nearby RSU, which validates the authenticity of the report as well as the identity of the vehicle by using blockchain technology. The security credentials of untrustworthy vehicles will be revoked by the RSU, and they will no longer be able to send messages to other vehicles.

“It is novel to be applying AI, deep learning, and blockchain to secure vehicular networks and ensure the trustworthiness of messages in a way that needn’t rely on encryption or authentication,” Li said. Vehicles are moving fast, so authentication needs to happen fast, making blockchain technology to trace messages a strong solution to validate trustworthiness, he added.

Li and the research team conducted an extensive experimental study to evaluate the AIT system. They used a Simulator of Urban Mobility, or SUMO, to download and generate maps for its vehicular network simulation. They chose the Columbus Circle area, where New York Tech’s New York City campus is located. SUMO is a widely used road traffic simulation tool and uses downloaded road information to generate vehicles that are running on the downloaded map with different directions, speeds, and initial locations. In this evaluation, the network simulations were set up by placing 50, 100, and 200 vehicles in the area during the simulation runs.

Early simulation results indicate that AIT performs better than existing approaches and can manage the trust of vehicles and detect malicious ones accurately and efficiently.

As part of her role on the team, student researcher Zhang helped program the network simulations and ran the simulation under different conditions (such as varying numbers of vehicles and traveling speeds), evaluating them on metrics including precision and recall. Li also helped Zhang become proficient in technical writing, which is a critical skill needed to help publish research papers. “I am always looking for students interested in engaging with faculty to help develop the next generation of researchers,” Li said.

“AI and machine learning applications are opening unimaginable frontiers to improve our lives. Having more intelligent, self-aware, and open systems will benefit consumers by providing inter-operability, communication and coordination among diverse systems,” said Babak Beheshti, Ph.D., dean of the College of Engineering and Computing Sciences. “However, security and privacy issues are always a primary concern in such systems. The College of Engineering and Computing Sciences is proud of its faculty and students who are charting new grounds in this area.”

Li and other New York Tech researchers have been studying technology transfer in the transportation field for several years. In early 2017, Li led a research team for the second round of funding from the University Transportation Research Center (UTRC), an organization established by Congress in 1987. With this funding, the team moved their focus from driver modeling to transmitting information between vehicles, culminating in the paper in the IEEE Internet of Things Journal. “We remain focused on ensuring that the information is accurate and correct and that the transfer of information between vehicles is efficient and safe,” says Li.