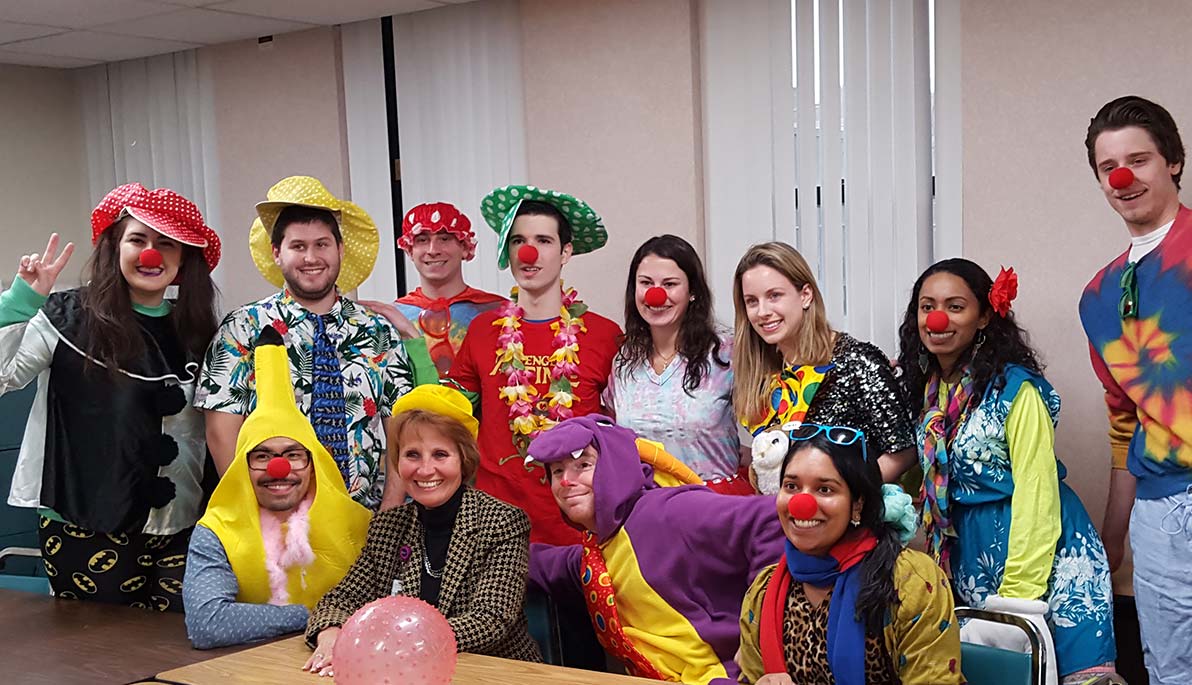 The guest speaker strode into Riland Auditorium where NYIT College of Osteopathic Medicine students had gathered. A purple cape billowed behind his 6-foot-4-inch frame, and a tiny fork earring dangled below his ear lobe. A bright blue streak ran through his waist-length gray hair, tied back into a ponytail.

This was no ordinary medical school lecturer.

Patch Adams (pictured), the internationally-known jester, physician, and social activist, was on campus to speak to the students about the need for empathy and compassion in the medical profession. He also urged them to find ways to bring more joy and happiness into their personal and professional lives.

"As an adult, you can be a playful, loving person," said Adams, who is known for his use of humor and clowning to help patients through their healing processes. "As a medical student, I always had toys and noses with me."

Advice dispensed, Adams moved on to the practicum: He rolled up the legs of his baggy, flowered pants, fashioning them into an oversized diaper, and then showed off his collection of gags, including a large pacifier, tie-dye socks, and fake nasal discharge.

And the demo was just the beginning. Following the lecture, 17 students joined Adams for an afternoon of clowning with pediatric patients at Good Samaritan Medical Center in West Islip, N.Y.

Second-year student Matthew Goldfinger, president of NYITCOM's student chapter of the American College of Osteopathic Neurologists and Psychiatrists, worked nearly a year to secure Adams' agreement to give two lectures and lead the clowning session.

"He's not just a funny doctor," Goldfinger said. "He believes health and happiness are human rights."

Adams' philosophy and unique approach to patient care helped make him a standout in his field. His methods, along with a 1998 movie based on his life and work, led to wider notoriety. Goldfinger, who idolized Adams as a child, said it was important for medical students—tomorrow's physicians—to learn how to be happier, to understand more than basic science and medical facts, and to feel better about themselves as they treat patients.

Leading up to the event, Goldfinger hid 12 red clown noses in and around NYITCOM buildings. The noses served as the "ticket" to clown with Adams at the hospital. Despite the bitter cold, students began showing up at 7 a.m. for the scavenger hunt. By 4 p.m., the last nose was discovered and the student-clown team was set.

Decked out in goofy hats, red noses, oversized ties, and other wild wardrobe accessories, the team gathered with Adams in a Good Samaritan conference room for a pre-clowning pep talk.

"Clowning is a trick to bring love closer," said Adams. He also offered a few tips for how to engage the young patients:

The students then fanned out into the pediatric ward. Many approached patients playing quietly in a lounge. Before long, imaginary sword fights, bubble-blowing demonstrations, and a spirited game of foosball broke out.

"The more you look 'not normal,' the more the patients come to you," said Adams. "The point is to discover yourself in this role. When you are a clown, you are not you."

That was certainly the case for NYITCOM student Ken Cheung, who dressed like a banana (pictured far left) and did (banana) splits in the lounge as teenage boys in hospital gowns cheered.

"I felt like I went on autopilot," Cheung said later, referring to how easy and rewarding it was to slip into his clown role. "From all the studying [for school], I felt like all the marrow was sucked out of me. This clowning reminds me of what we're here for: the patients."

Love and Compassion in Healthcare

Adams' campus visit was not all laughs. He was sharply critical of some aspects of today's medical profession, particularly the short time some doctors spend with patients, the hierarchy within hospitals, and the cost of care.

He also condemned society's current approaches to mental health, which he believes is too reliant on medication and not focused enough on connections with patients.

He discussed his ongoing work to establish a hospital in West Virginia and showed videos of his clowning trips to Haiti and Guatemala. "The practice of medicine should be a joyful, playful, and loving experience," Adams wrote in an email prior to his visit. "It's what patients want. Stress-free work creates better teamwork—there is no positive medical literature for the importance of professional distance, arrogance, apathy, cold, but you could find thousands of papers on joy, love, humor, creativity, and cooperation."

He told the students: "It can be beautiful to dance in a hospital." NYITCOM students may get another chance to do just that. Good Samaritan officials were so pleased with the results of the clowning session that they've asked the students to return for future gatherings.