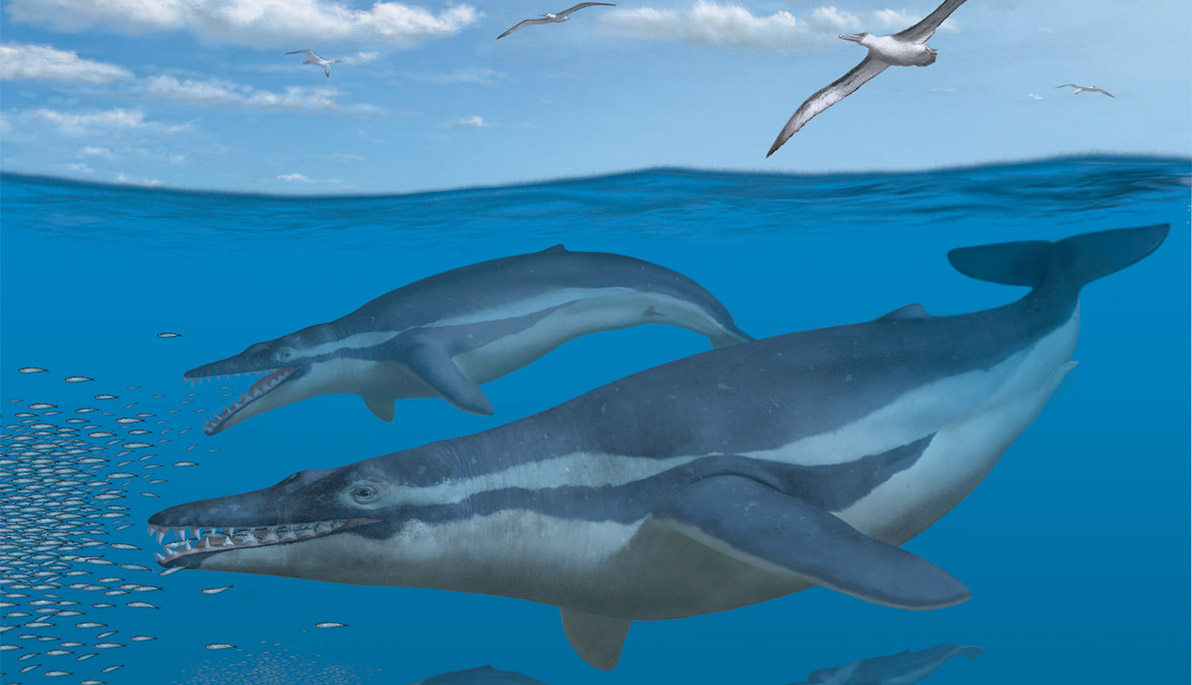 A scuba diver is looking for shark teeth in South Carolina’s Wando river. Instead, he resurfaces with an entirely different discovery—an ancient species of whale that may ultimately provide the scientific evidence to explain how baleen whales lost their teeth.

Coronodon havensteini, named for Mark Havenstein, the diver who inadvertently found its remains in the early 2000s, is an early species of toothed mysticete (the scientific name given to precursors of baleen whales that retained teeth) believed to have lived 30 million years ago. It has also become a vital clue in a prehistoric mystery, one that researchers at NYIT College of Osteopathic Medicine (NYITCOM) are eager to solve: Just how did baleen whales, the world’s largest vertebrates, evolve to become filter feeders, preying almost entirely on tiny saltwater crustaceans, such as krill? A recent study by NYITCOM associate professors Jonathan Geisler, Ph.D., chair of the Department of Anatomy, and Brian Beatty, Ph.D., aims to show that Coronodon havensteini provides key evidence in the search to learn how the baleen evolved.

Modern cetaceans, including whales, dolphins, and porpoises, do not chew to eat their food. Instead, they rely on one of three methods: sucking food through the mouth, securing prey with teeth, or opening their mouth and thrusting the body and mouth forward. Baleen whales use the last method and sift through vast volumes of salt water to capture krill and other small organisms. As the whale pushes the water out, its bristle-like “baleen,” made of the protein keratin (which is also found in human fingernails), strains the organisms and leaves behind a food source for the whale. 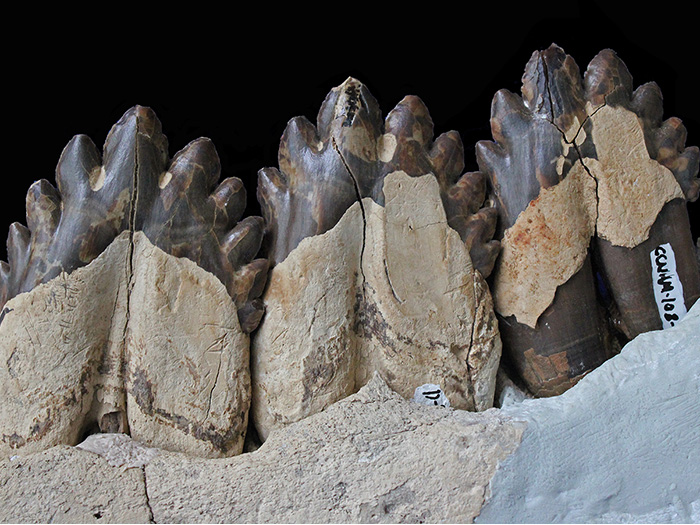 Wear on Coronodon havensteini's molars indicates the ancient whale used its teeth to filter out prey.

But the evolution of the baleen itself is a matter of much debate. When baleen whales are in utero, they begin to form teeth but later stop. In addition, the earliest fossil cetaceans, which existed 50 million years ago, also had teeth, leading scientists to believe that baleen whales have toothed ancestors. However, researchers have often debated whether these whales passed through an evolutionary stage of toothless suction feeders or whether they used teeth for filtering until baleen evolved.

The NYITCOM team advocates the second theory. “The transition from teeth to baleen is widely contested, but our research indicates that ancient toothed whales relied on the spaces between their complex and enormous teeth for filtering,” said Geisler. “It appears that over millions of years, the teeth were retained until baleen became sufficiently large and complex to take over the role of filter feeding.”

After studying Coronodon havensteini, Geisler, Beatty, and their colleagues realized the new fossil species could offer important evidence about the teeth-to-baleen transition. Coronodon havensteini is a transitional species on the evolutionary timeline—it sits between earlier whales that snagged fish with their teeth and modern baleen whales. Additionally, when the researchers compared Coronodon havensteini to other ancient whales, they noticed that it had remarkably large molars, the size of an average human palm, which suggested uncommon feeding behavior.

“Unlike its front teeth which were used to snag prey, the wear on Coronodon havensteini’s unusually large molars showed no evidence of shearing or cutting food,” said Beatty. “This suggested that the whale’s molars were used to filter food.” Their theory was further supported when the researchers discovered wear on the hidden cusps bordering these openings.

Coronodon havensteini currently resides in the Mace Brown Museum of Natural History at the College of Charleston where it has been studied by Geisler, Beatty, and two collaborators from the museum, Robert Boessenecker, Ph.D., and Mace Brown, Ph.D. The researchers will continue their investigation by examining closely related species from the Charleston, S.C. region in search of further evidence.