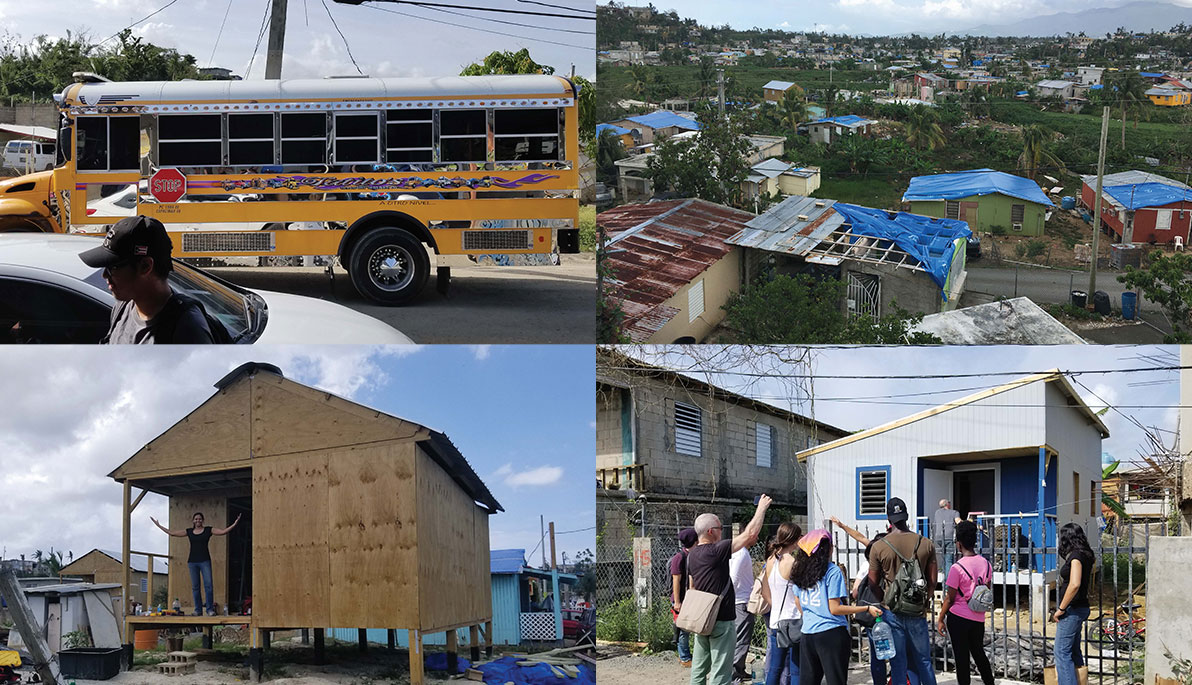 Hurricane Maria dealt a devastating blow to Puerto Rico, and the island is still struggling to rebuild and regain normalcy. This dramatic situation spurred students in NYIT School of Architecture and Design to travel to Puerto Rico and make a difference through social impact design.

Led by Associate Professor Farzana Gandhi, AIA LEED AP, who has coordinated prior projects in Puerto Rico, and with the generous support of Dean Maria R. Perbellini, M.Arch., and the school's administration, the team focused on two initiatives: volunteering with an organization called TECHO to help build homes for displaced families and participating in an international workshop to design solutions to help Puerto Rico in the wake of disasters.

Approximately 70 NYIT fourth-year architecture students worked on the design of community facilities that double as evacuation centers for real sites and communities in Puerto Rico this spring. When NYIT received an invitation to participate in the international workshop, being held at the University of Puerto Rico in San Juan over Spring Break, Gandhi put out the call to these students along with fifth-year architecture students in Manhattan and Old Westbury, and 16 made the trip to Puerto Rico.

“After the hurricane, I saw the disaster. I felt bad for the people and that they weren’t getting the help they needed. I thought we could go there and help,” says Laszlo Kovacs, a fifth-year architecture student who went on the trip. NYIT Adjunct assistant professor Matthew Krajewski was also instrumental in coordinating the activities for NYIT.

The team was moved by the amount of work that still needs to be done in Puerto Rico. This was especially apparent when the students volunteered with the group TECHO to build homes for a local community. “We visited informal settlements with blue tarps for roofs. There’s no stable electrical grid. The University of Puerto Rico lost power for two days while we were there,” Gandhi says.

“It was disturbing to see,” Kovacs adds. “On the positive side, the people of Puerto Rico are resilient. They have stuck together.”

The workshop took place as planned and produced some impressive results. In addition to the team from NYIT, representatives from universities in Florida, Puerto Rico, Rome, and Seville attended. “We took part in one of five separate design projects in this workshop,” Gandhi says. “Our project involved repurposing shipping containers as emergency core centers. These end-of-life containers typically slated for the landfill would cost between $500 and $1,500, so they were cheap systems with structural integrity.”

The proposed system maintains the integrity of the container by adding a system of parts that attach to the outer surface to make the container useful for particular situations. The interchangeable parts and panels would, depending upon the need, serve medical and sanitation purposes. An electricity and communications component would feature panels that fold down to become mobile offices and charging stations. An ATV and a drone housed in a “logistics unit” would be used to bring supplies to remote areas.

Following a week of brainstorming ideas in the workshop and seeing and responding to the devastation first-hand, the students returned to NYIT energized and ready to do more. “We’re starting to get excited about the next steps,” Gandhi says. Plans include securing funding to make the shipping container project a reality. “We’d like to scale up eventually with hundreds of containers that would hopefully be in place for subsequent storm seasons.”

The trip also offered students a chance to see different architecture in the Caribbean and to collaborate with architecture students from other parts of the world. “I wanted to expand my knowledge,” says fourth-year architecture student Samuel Molina. Experiencing the situation in Puerto Rico made the need for social impact design solutions more tangible. “This is valuable and real, and we want to push forward,” he adds.

Several of the students involved in the Puerto Rico projects will graduate this spring but plan to continue their involvement. “This is just the beginning for all of us,” Gandhi says.