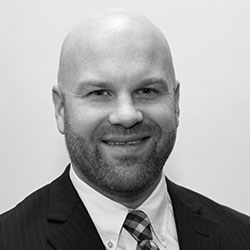 From Managing Wealth to Managing Health

As a financial advisor and planner, Charles Fennie says he had to dig deep to look at a person’s whole situation in order to best advise them. Now that he’s pursuing his medical degree, he’s discovered that osteopathic doctors do the same thing. “Osteopaths treat the whole person, not just the disease process,” Fennie explains.

Fennie’s journey to becoming a medical student at NYIT College of Osteopathic Medicine is unusual. After seven years in finance, the father of four found that something was missing. “Even though I was finding success in my financial career, it wasn’t fulfilling,” he says. “When I finally sat my wife down and revealed that I wanted to transition my career to medicine, I could see relief on her face.” She, too, knew that her husband was destined for something different.

Fennie’s desire to practice medicine also has a larger purpose; his ultimate goal is to serve the global community. “My dream job would be to go out on the global stage and provide medical care to those in areas of the world who do not have access to basic medical services,” he says. “However, I did not know in what capacity or specialty.”

As he pursued his studies, the answer to that question became clear.

From his first week of medical school, in his gross anatomy lab, he was drawn to the operating room. “From the first scalpel cut to the final exam, I was enamored with how the human body was assembled.” He immersed himself in his studies and learned all he could about the body’s inner workings. He later served as an Academic Medicine Scholar and helped first-year medical students with their gross anatomy studies. “I tutored students, challenged their understanding of the material, and helped them to discover the more difficult and delicate structures [of the body],” Fennie says. He added that he felt that the “blend of anatomy and teaching was the most rewarding experience during the scholar program.”

He found gratification from the program in other ways as well. “One of the areas that I thoroughly enjoyed was dissecting vascular structures, which led me to NYITCOM’s Summer Research Program,” he says. Through the process, Fennie learned patience, precision, and attention to detail, “Qualities that I have continued to foster,” he adds.

Now that he is nearing the end of medical school, Fennie has been reflecting on his time at NYITCOM. “I think the most rewarding aspect of this academic journey is seeing the hard work and long hours pay off,” he says. “I often wondered how everything would come together in the end.” Fennie can certainly look back on his academic career with pride. And he credits the university for helping him realize his dream. “NYITCOM prepares us to be exceptional clinical physicians,” he says.

As he looks ahead, Fennie is excited to begin his journey as an osteopathic physician. He recently matched to the General Surgery Residency Program at Doctor’s Hospital in Columbus, Ohio—his number one choice.

“I envision myself working both domestically and abroad, aiding those who lack basic healthcare,” he says. “I am ready to start the next phase of my training as a general surgery resident in the same way I transitioned careers: with unwavering focus, complete dedication, and unrelenting curiosity.”