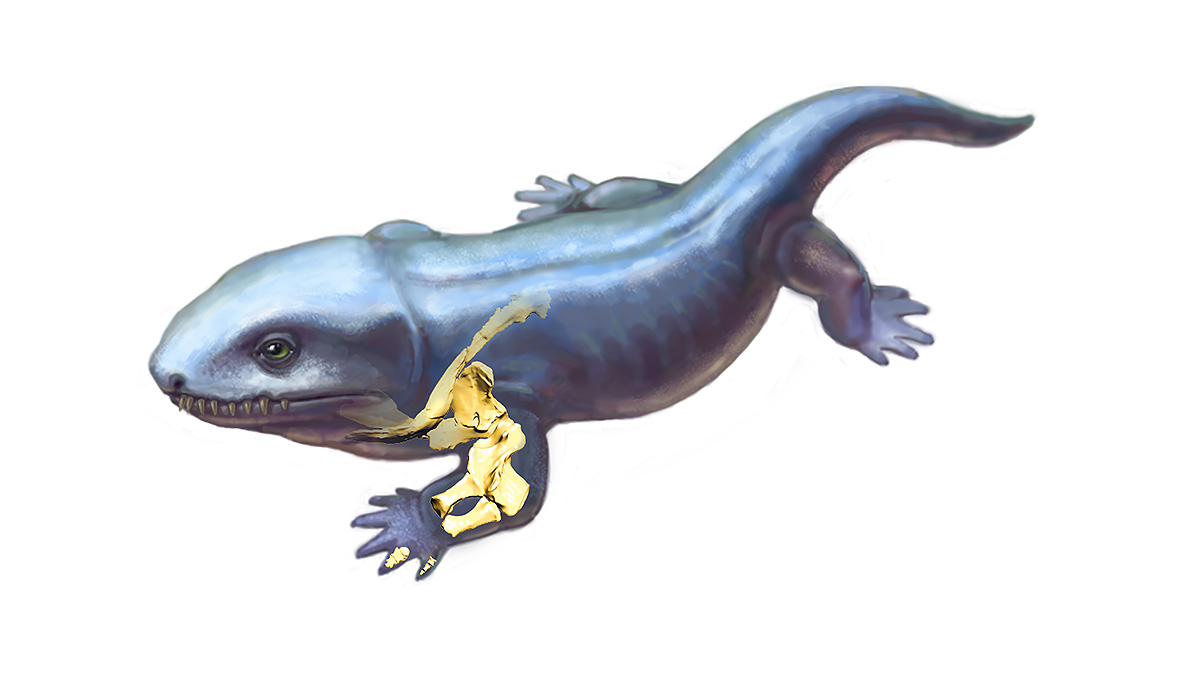 Pictured: A life reconstruction depicting Pederpes, an ancient tetrapod estimated to be about 348 million years old. Researchers believe that the forelimb bones, shown beneath the skin, were likely used to propel the animal forward and assist with movement that resembled underwater walking. Photo credit: Julia Molnar, Ph.D., 2021.

About 390 million years ago, an ancient four-legged predator lurked in shallow water, puffing its gills, flexing its webbed eight-toed feet, and waiting to propel toward unsuspecting prey.

Yet, this animal was no sea monster. It was the early ancestor of today’s tetrapods, creatures with four limbs, a group that includes today’s humans, as well as some marine animals such as dolphins and whales.

Measuring one to two meters long, the earliest tetrapods were the first vertebrates to move from water to land, and are believed to have looked like a cross between a giant salamander and a crocodile. Twice as old as the earliest dinosaurs, these creatures were bizarre looking by today’s standards—sporting gills, short limbs, and webbed feet with eight digits. Scientists believe that early tetrapods were “ambush predators” that prowled in shallow water, waiting to attack nearby prey. While experts know how tetrapod limbs evolved from fish fins, there is much debate on how these limbs worked and allowed the first tetrapods to go from swimming to walking on land.

“There have been many theories suggested about how early tetrapods moved, but very few studies thoroughly test these theories using the fossil record,” says Molnar. “Using fossil record data, we set out to better understand the musculature of the first tetrapods in order to determine just how, exactly, they used their limbs to move from water onto land.”

However, determining the muscle and bone structure of these creatures was no easy task. Muscles are not preserved in fossils and the muscles found in fish fins today, which evolved over millions of years, are entirely different from modern tetrapod limbs.

To connect the dots, the team would first need to spend several years analyzing how a few simple muscles of a fish fin could become dozens of complex muscles found in a tetrapod limb. Using computational software, the international research team, which included scientists from Harvard University, University of Cambridge, Howard University, and the Royal Veterinary College, compared 3-D digital models of the bones, joints, and muscles of fins and limbs from two extinct early tetrapods, as well as a closely related fossil fish.

Tetrapod limbs are believed to have evolved from the pectoral fin, which is found directly behind a fish’s head. Given this, the researchers examined the pectoral fin of a fish closely related to tetrapods that lived approximately 385 million years ago, known as Eusthenopteron. They also modeled the front limbs (forelimbs) of two early tetrapods: the 365-million-year-old Acanthostega and Pederpes, estimated to be approximately 348 million years old. For comparison, the team also built similar models of today’s living animals, reconstructing the pectoral fins on the coelacanth and lungfish and the forelimbs of salamanders and lizards.

The researchers used micro CT-scanned fossils to reconstruct a virtual skeleton of the ancient tetrapod Pederpes. As shown around 29 seconds, the anatomy of early tetrapods, like Pederpes, allowed them to move in a way that resembled walking underwater, with their forelimbs driving most of the movement. Photo credit: Julia Molnar, Ph.D., 2021.

Putting Theories to the Test

Analyzing how these animals’ bones, joints, and muscles worked together allowed the team to test a variety of theories on how ancient tetrapods walked. Their models indicate that the forelimbs of all terrestrial tetrapods underwent three distinct functional stages: a “benthic fish” stage, which allowed movement similar to a modern lungfish, an “early tetrapod” stage that supported unique movement unlike any other extinct animal, and a “crown tetrapod” stage with movement characteristics of both lizards and salamanders.

Similar to how a fish relies on its pectoral fin to propel forward and backward, the researchers concluded that early tetrapods likely moved in a way that more closely resembled underwater walking than paddling, relying on the forelimbs for propulsion. This suggests that early tetrapod limbs may not yet have had the necessary musculature for weight-bearing, which walking on land requires.

Researchers note that while their anatomy may have favored aquatic locomotion, the earliest tetrapods may still have been able to move on land, just differently from the tetrapod movement we know today. The ability to venture onto land would have had its advantages, such as less risk of predation, and adaptations supporting this ability would have been beneficial.

How early tetrapods used their hind limbs could also play a vital role in understanding how tetrapods evolved. Modern tetrapods get most of their power from the hind limbs, making the next phase of the research essential.

“Looking at the forelimb and hind limb together could reveal more about the transition from water to land and how tetrapods eventually came to dominate the terrestrial realm,” she says. 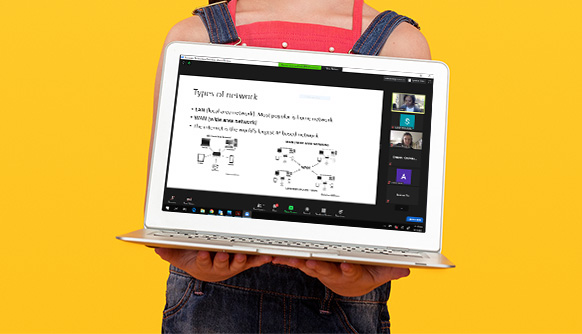 Inspiring the Next Generation of Women in STEM