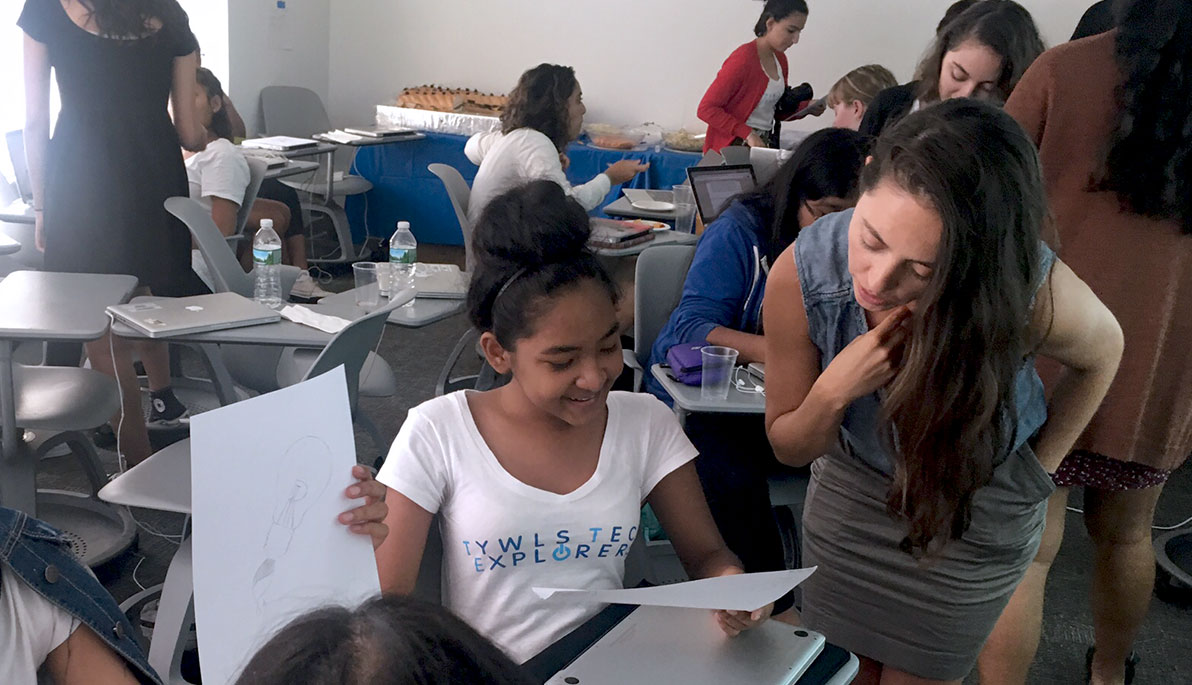 NYIT provided Tech Explorers with space to work, meals, and free wifi. Assistant Professor Jim Martinez also spoke to the girls about science and technology, their projects, and their aspirations. At the end of the program, each group “pitched” their app design to “potential investors.”

According to Chaves, the lack of girls in STEM careers is not due to a dearth of talent or interest, but rather to a lack of exposure. For many of the girls who take part in Tech Explorers, the STEM fields are a natural fit. “Sometimes I have to remind myself and them that when they go into the larger world they are going to be in the minority for coding,” Chaves said. “I have a student who has been coding for a few years, and a few months ago we went to a computer science fair. When we entered the fair, she looked around and said, ‘Oh my goodness, I didn't know so many boys liked to code!’”

Chaves began thinking of ways to address the gender gap in technology-related fields while she was still a graduate student in NYIT’s instructional technology program. Later, as a teacher at The Young Women’s Leadership Network School (TYWLS) of Queens, she felt she was in the right place to take action. “We were part of a network of five all-girls schools, and no one was teaching coding,” she explained. “I reached out to the network leadership and told them I thought it was important to provide more technology classes. I was thinking they would hire someone to teach coding, but in the end I was the one who started teaching it.”

With no formal training in the field, Chaves took a two-day seminar, and dove in with her students. “As a teacher you try to be a role model. You always tell the kids, ‘Continue, don’t be afraid.’ And I needed to do that too, because there was no one else to do it,” she said.

Interest among students was high, and Chaves soon found herself as the head of a new after-school club where girls could explore more areas of technology, such as filmmaking, coding, and graphic design. The club soon grew large enough to warrant an official class, and Chaves decided to launch a supplementary summer program: TYWLS Tech Explorers.

Chaves’ work has not gone unnoticed. In addition to the many students whose lives she has touched, in January, she was recognized nationally as a White House Champion of Change for Computer Science Education.

During the three-week program this summer, the girls traveled to difference host organizations, including Apple, Wells Fargo, Microsoft, Buzzfeed, and Goldman Sachs and, of course, NYIT. Once there, they broke into groups and worked on their projects. This year’s apps include a tool to help seniors to keep track of their medications, a program that makes it easier for high school students to get their transcripts, and even a design tool that enables a user to design an outfit from their existing wardrobe.

BrittanyGreve, a TYWLS Tech Explorers counselor and one of Chaves’ former students, said she was especially excited to see the girls working on their apps in college environment. “They were in a college classroom, they were talking to professors about their interest in science and technology, and even when they just walked outside to get a drink or go to the bathroom, they were looking around and seeing what a college was like.”

As a proud alumna, Chaves was excited to expose her students to the world of NYIT. “It was a perfect match,” she says, “It is, after all, New York Institute of Technology.”