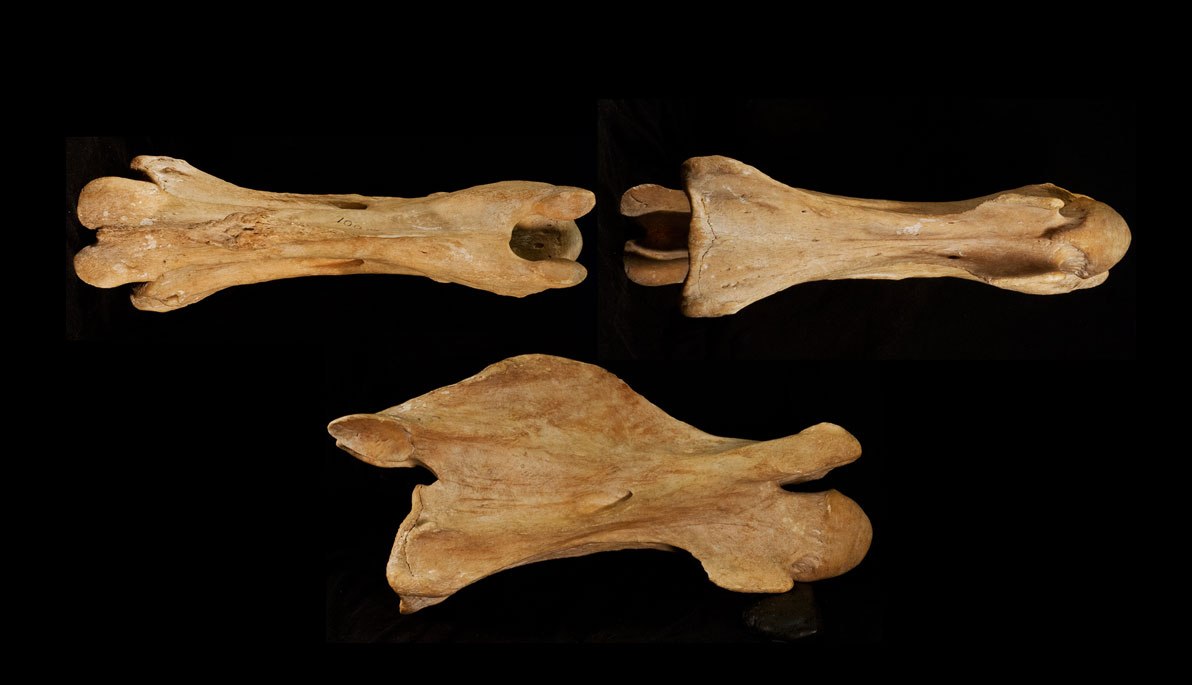 Scientists have long theorized that the long neck of modern-day giraffes evolved to enable them to find more vegetation or to develop a specialized method of fighting.

A new study by Anatomy Professor Nikos Solounias, Ph.D., and student Melinda Danowitz of the NYIT College of Osteopathic Medicine (NYITCOM) reveals the evolution likely occurred in several stages, as one of the animal’s neck vertebrae stretched first toward the head and then toward the tail a few million years later. The study’s authors say the research shows, for the first time, the specifics of the evolutionary transformation in extinct species within the giraffe family.

“It’s interesting to note that the lengthening was not consistent,” says Solounias, a giraffe expert and paleontologist. “First, only the front portion of the C3 vertebrae lengthened in one group of species. The second stage was the elongation of the back portion of the neck vertebrae. The modern giraffe is the only species that underwent both stages, which is why it has a remarkably long neck.”

C3 refers to the third of seven vertebrae that comprise the bone structure of an animal’s cervical spine.

Solounias and Danowitz studied 71 fossils of nine extinct and two living species in the giraffe family. The bones, discovered in the late 1800s and early 1900s, were housed at museums in England, Austria, Germany, Sweden, Kenya, and Greece.

“We also found that the most primitive giraffe already started off with a slightly elongated neck,” says Danowitz, who is an NYITCOM Academic Medicine Scholar. “The lengthening started before the giraffe family was even created 16 million years ago.”

But the main discovery came after the researchers analyzed anatomical features of the various fossils and compared them to the evolutionary tree.

“That’s when we saw the stages playing out,” says Danowitz.

Solounias and Danowitz found the cranial end of the vertebrae initially stretched around 7 million years ago in the species known as Samotherium, an extinct relative of today’s modern giraffe. That was followed by a second stage of elongation on the back or caudal portion around 1 million years ago. The C3 vertebrae of today’s giraffe is nine times longer than its width—about as long as an adult human’s humerus bone, which stretches from the shoulder to the elbow.

As the modern day giraffe’s neck was getting longer, the neck of another member of the giraffe family was shortening. The okapi, found in central Africa, is the only other living member of the giraffe family. Yet, rather than evolving a long neck, Danowitz says this species is one of four with a “secondarily shortened neck,” placing it on a different evolutionary pathway.

The researchers’ next study area is the evolution of the giraffe’s long leg bones.

Results of the study were covered by several media outlets, including National Geographic and LiveScience.