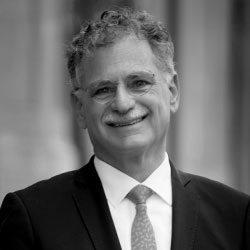 Edward Guiliano, Ph.D., was appointed the third president of New York Institute of Technology in June 2000. He joined the university’s faculty in 1974 and was the youngest person at New York Tech to be promoted through the ranks to full professor. He served as vice president of academic affairs in 1996 and two years later took on additional responsibilities and added the title provost. President Guiliano holds a bachelor’s degree from Brown University and a doctorate from Stony Brook University.

During his New York Tech presidency, he helped shape the concept of “the global university,” one that offers the same degree across multiple campuses through shared curricula, diplomas, and accreditations. This model has defined the transformation and rebranding of New York Tech from a regional university into an international institute of higher learning, with campuses in New York, Arkansas, Abu Dhabi, China, and Vancouver, in addition to international partnerships with schools in Taiwan, Brazil, France, Turkey, and China.

His leadership has resulted in improving both the quality of New York Tech’s academic programs and its reputation domestically and globally, as evidenced by its many accreditations and its steady improvement in rankings, including US News & World Report and Payscale’s ROI survey, among others. Under his presidency, New York Tech became the first American university to receive accreditation by the U.A.E. Ministry of Higher Education and Scientific Research. Dr. Guiliano also spearheaded the creation of the university’s strategic plan, NYIT 2030, which serves as a blueprint for New York Tech’s continued evolution, academic growth, and financial resiliency.

One of his biggest contributions has been the large-scale expansion of NYIT-New York City from one-and-a-half buildings to a vibrant campus center incorporating high-tech learning facilities including a business incubator, simulated trading floor, robotics lab, and the newly opened HIVE (Home for Innovation, Visualization, and Exploration) with 3-D, motion capture, and VR resources. In 2010, the campus opened NYIT Auditorium on Broadway, a 9,000-square-foot event space near Lincoln Center and Columbus Circle. In honor of his dedication, NYIT-New York City’s main building at 1855 Broadway was named the Edward Guiliano Global Center in 2012.

Dr. Guiliano is a frequent speaker at conferences around the world and op-ed author on topics that include Big Data, energy and sustainability, global higher education, cybersecurity, and instructional technology. He has also served on the Board of Trustees Executive Committee for Commission on Independent Colleges & Universities in New York, the Board of Directors of the Fair Media Council, and the Long Island Regional Advisory Council on Higher Education.

A scholar of Victorian literature, Dr. Guiliano is the author and editor of eight books and more than 150 articles. He is a founding member of the Lewis Carroll Society of North America and former president of the society. In addition, President Guiliano is the recipient of two honorary degrees and the Ellis Island Medal of Honor for his personal accomplishments, social compassion, and outstanding contributions to American society. He is married to best-selling author Mireille Guiliano.