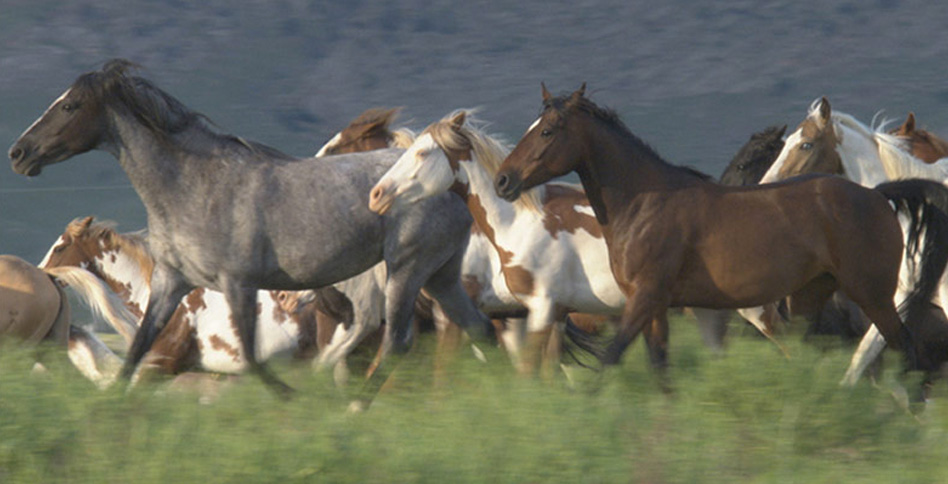 Next to him in a hot air balloon, Suzanne Mitchell (B.A. '84) scans the terrain of South Dakota's Black Hills. They see endless clear blue sky framing flatlands, canyons, ridges, and jagged rock formations. The pair floats above one of the last great refuges of the American West, unblemished land that will never be developed should one person have his way. In the distance, the Cheyenne River runs northeasterly into the landscape.

A colorful flock of wild mustangs stampedes below them. Brattoli lifts his 25-lb. camera, shooting 24 frames per second, and captures the moment. On the ground, thunderous hooves pound and uplift dirt. But high above in the sky where they are filming, there is eerie, smooth silence.

A man whose story needed to be told.

A Cowboy Among People

"I never turn down an adventure. When I have an idea, I go do it. Hang the circumstances."
-Dayton O. Hyde

It was in 1992 when Emmy Award winner Mitchell first learned of the 67-year-old Hyde. As a producer for People's two-hour ABC television special celebrating the magazine's 20th anniversary, she had spent four months wading through stacks of issues, searching for interesting personalities to highlight. That was when she came across a small article dated Oct. 24, 1991, titled "Hooves & Heart." It profiled a man on a crusade to preserve one of North America's last great treasures—wild horses—and his efforts to keep them from being captured and slaughtered.

Mitchell was impressed. "I thought it would be a nice change from the celebrity stories we were running for the special," she said.

People approved her request, and Mitchell recruited longtime friend and colleague Brattoli to join her as they spent five days shooting on Hyde's South Dakota ranch. He told them of his efforts to keep his 12,000-acre slice of natural America a safe haven for 300 wild American mustangs ("It's like adding rhythm to music to add horses to this land," Hyde said in the original People article).

Though his segment was slotted for only a few minutes in the TV special, Mitchell and Brattoli kept the cameras running as Hyde told them stories of his days growing up on his uncle's farm near Klamath Falls, Ore., where seeing horses run wild stirred his heart. He later served in Europe during World War II, organizing rodeo shows for U.S. troops, and later attended Berkeley, where he majored in English and studied under American novelist George R. Stewart. Hyde also photographed for Life magazine, capturing images of bucking broncos and their riders; one of his shots even made the publication's Picture of the Week.

After graduating, Hyde returned to his roots and landed one of his first ranch jobs by accident. A new employer reviewed his college records and saw lots of "ENG" courses, mistaking them for engineering classes. The confusion proved immaterial, and Hyde's ranch work became the precursor of the environmentalism movement that would arrive years later as he transformed lands into thriving wildlife habitats where animals and crops could grow safely. Along the way, he authored nearly a dozen books about the natural world and the need to be environmentally responsible.

In 1986, Hyde decided to open the Black Hills Wild Horse Sanctuary after a disturbing sight. On his way to Nevada, he witnessed hundreds of wild mustangs crammed into tight spaces as a means of population control. That was when he decided to reinvent himself at the age of 62, using whatever loans and credit cards he could to open his wildlife refuge.

At the end of their five days on Hyde's horse sanctuary, Mitchell and Brattoli knew that a few minutes on a People TV special wasn't enough. They had to find a bigger way to convey his story. Alone in their truck, outside the sanctuary, ready to head home and cut the People footage, the pair looked at each other.

Mitchell was in tears. Brattoli had goose bumps. Hyde's humor, personality, and life story had touched them.

"I think we just met the most interesting guy ever," Brattoli said.

Mitchell agreed. "We have to do something more," she replied.

They made a promise to return.

A Commack, N.Y., native, Mitchell had met Brattoli in 1983 while the pair worked for NYIT-Old Westbury's LI News Tonight, the university's student-produced nightly news show that aired on Long Island cable television. It was the program's inaugural year and designed to complement NYIT's real-world focus on career education, giving students the same tools that professionals use in the field.

"Cut it yourself, write it yourself," Mitchell recalls of the mindset that her NYIT professors ingrained in her. LI News Tonight gave students the freedom to pursue stories and tell them in their own way.

While working as a reporter for the student news show, Mitchell learned of a fire at a shoe store in Long Beach, N.Y. The only student cameraman available was a young man from Flushing, N.Y., whom she barely knew.

The result was a story that blended Mitchell's detailed reporting skills with Brattoli's superb eye for visual storytelling. It was a moment that cemented their friendship.

"People thought I was crazy. … It can't be done. That's the wrong thing to say to a cowboy."
-Dayton O. Hyde

Mitchell and Brattoli returned to the Black Hills Wild Horse Sanctuary in 2002 to finish what they had promised; she would serve as director and producer, and he as director of photography of Running Wild: The Life of Dayton O. Hyde. Over 11 years, they profiled Hyde as well as interviewed his closest friends and family. They also spent days shooting horses and other wildlife on the sanctuary, sometimes huddled against the ground to avoid spooking the animals, and one memorable day thousands of feet above ground in a hot air balloon.

"Once I was on the sanctuary, my camera was always rolling," Brattoli says. "Everywhere you looked was a beautiful image. The way the light falls on the land, the ridge rock becomes this warm palette, like you're looking at a piece of art."

Mitchell remained in contact with Hyde throughout the years, lining up new interviews and scenes to document as the pair returned each year. She also thought up new ways to capture audio of wild mustangs running across the South Dakota plains. The director/producer recalls one sound recording when she was seven months pregnant with her son. Hiding in the woods, planting microphones in the ground to get the thunderous sound of 100 horses stampeding in her direction, she remembered Hyde's advice before heading out to the site: "Don't worry, they won't run you over. Just hold out your hands."

Running Wild also depicts Hyde's fight against uranium miners from Canada who are infiltrating the areas surrounding the Black Hills. Radiation warning signs along the Cheyenne River run the risk of contaminating the 500 horses that now roam wild and drink from that water source. Hyde's dedication to keeping the land pure is also evidenced by the Native American Lakota tribe, who formally named him "Protector of Ceremonies" during a sacred ritual that Mitchell received special permission to film.

When the last footage was shot in 2012, Mitchell and Brattoli headed back to New York to edit and begin post production. For the latter, they enlisted the help of Full Circle Post NYC, owned and operated by Rob Burgos (B.F.A. '98, M.A. '99), who had met Mitchell years before when he had worked as an intern for the production company.

"I've worked with Suzanne on several projects," says Burgos, who also teaches media courses as an adjunct professor at NYIT-Old Westbury. "We've developed a friendship throughout the years built on trust. She's very easy to work with."

Burgos' job was to color correct the footage that the pair shot-one of the last steps before the public sees the finished film. The biggest challenge was achieving the color balance of archival news footage shot in standard definition and matching it up with the beautiful camerawork directed by Mitchell and filmed by Brattoli.

Joining Burgos at Full Circle was Liza Acevedo (B.F.A. '98, M.A. '99), who served as post production manager and assisted Burgos to ensure that Mitchell got everything she needed to bring the film to the public and distribute it to festivals. Acevedo, who now works in satellite operations at Al-Jazeera America, could tell how much passion Mitchell brought to the production.

"She really falls in love with her project," says Acevedo. "And it shows in the film."

In early 2013, Running Wild was ready for audiences. But Mitchell's immediate concern was the reaction from Hyde after seeing his life depicted on the big screen.

"I was so scared to show it to him," she says. She was nervous as she sat with Brattoli in their first public screening during their Slamdance Film Festival premiere. When the final credits rolled and the lights came up, Hyde was moved. He turned to her and said: "I just can't believe how wonderful this film is."

The old cowboy knew what he was talking about. Running Wild has already earned distinction from several film festivals nationwide, including the Audience Award Winner at the Sarasota Film Festival. The documentary premieres in theaters and through video on demand beginning Oct. 4. Hyde himself is making an appearance at a special screening in New York City that same day.

For Mitchell and Brattoli, seeing audiences' enthusiastic response to the life of Dayton O. Hyde was cathartic after spending so many years documenting his life. But for filmmakers, there is always the next project. So what's next for the former LI News Tonight crewmembers?

"That's the question," says Brattoli. "But it will be something that involves Suzanne. We understand each other."

For more on Running Wild: The Life of Dayton O. Hyde, visit runningwildfilm.com.