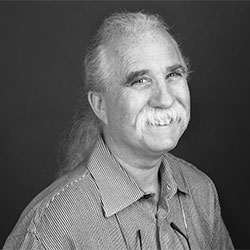 Professor Turkel earned a Ph.D. from Cornell University with majors in biological anthropology and archeology, and minors in anatomy, geology, and cultural anthropology. He has been involved in archeological work in the United States, the Middle East, and Europe. For many years, he worked as a Forensic Anthropologist, assisting the judicial system in identifying decomposing or skeletonized remains, and in locating buried remains. This work often required ad hoc research in the reconstruction of life or circumstances of death from the skeleton. Other areas of research involved clinical applications of anatomy. Turkel is currently working on topics related to the history and philosophy of biology.

In addition to teaching and scholarship, Turkel has also held administrative positions at NYIT. He was chair of the Life Sciences Department and assisted in the creation of the School of Health Professions as its director of academic program development.

1981: The Stabilizing Mechanisms Preventing Anterior Dislocation of the Glenohumeral Joint. Journal of Bone and Joint Surgery 63A(8):1208‑1217. (with M. Panio, J. Marshall, and F.G. Girgis)

1986: Classification of Spina Bifida Occulta in the Sacrum and Its Application to the Identification of skeletal Remains. Annual Meeting of the American Academy of Forensic Sciences, Program (with J.V. Taylor).

1997: Making Culture Count: the Evolution of a New Health Professions Curriculum. Proceedings of the Society for Applied Anthropology.(with D. Shapiro)

1995: Estimation of Time Elapsed Since Death Through the Use of the Bryophyte Reproductive Cycle. In B. Jacob and W. Bonte, eds., Advances in Forensic Sciences, Proceedings, International Association of Forensic Sciences,  Dusseldorf, Germany. IV: 144-146 (with W.R. Buck and J.V. Taylor).