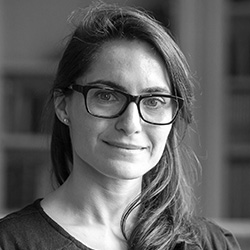 Before joining New York Tech, Sophia Domokos held a sub-line assistant professorship at the New York City College of Technology, a Provost’s Postdoctoral Fellowship for Academic Diversity at NYU, and a postdoctoral fellowship at the Weizmann Institute of Science. She received her Ph.D. in Theoretical Physics from the University of Chicago in 2010 and her A.B. from Harvard in 2003.


Much of Domokos’s research focuses on “gauge-string duality,” a powerful conjecture connecting the abstract, higher dimensional world of string theory to real physical systems, like atomic nuclei and high-Tc superconductors. She and her collaborators have used the duality to predict new phenomena (like an undulating crystal structure in the dense cores of neutron stars) and have identified a number of key experimental signatures crucial to testing the duality in nuclear- and particle-physics experiments. Most recently, Domokos and a collaborator developed a string-theory model that boasts a rich variety of “solitons,” clumps of matter that act as a single object, like water forming a whirlpool. They are using their model to gain insight into two-dimensional systems commonly found in condensed matter physics.


Domokos also has a strong interest in science communication. She is editor-in-chief of The Cooper Square Review, an online magazine featuring reviews of recent popular science books, as well as essays and musings about science and the lives of scientists.