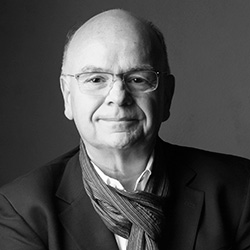 Robert Allen brings a unique multi-disciplinary perspective to New York Tech, reflecting his long-standing interest in the convergence of various design disciplines. A Harvard-trained architect, he is founding partner of Metalhouse, a firm that specializes in product, graphic, architecture, and interior design.

Allen has served as acting chair and coordinator Department of Interior Design for the past 10 years. At NYIT-Long Island, he teaches the first-year, thesis, and furniture design studios for student architects and interior designers. He encourages them to imagine new ways to utilize their respective orientations and explore unorthodox solutions to everyday problems. His work on "micro-environments" enabled students to explore the utilization of "smart" materials and multi-functional configurations for New York Tech's entries in the 2005, 2007, and 2011 international Solar Decathlon (sponsored by the U.S Department of Energy). This effort was the first to suggest furniture be factored into the overall energy equation for homes, and was featured in the Museum of Arts & Design's show, Beyond Green, Towards a Sustainable Art, as well as at the International Contemporary Furniture Fair and Milan Furniture Fair.

Recent undertakings at the furniture design studios include proposals for urban sidewalk furniture for Department of Transportation sites that apply principles of interior design as well as proposed sidewalk sanctuaries for pedestrians. Over the years, students from this class have been awarded four Donghia Foundation $30,000 scholarships.