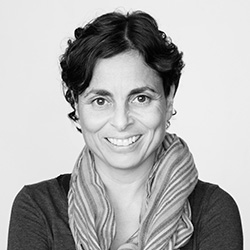 A lifelong learner, Reem Abu-Sbaih uses osteopathy and homeopathy to treat various complaints from newborn to adult. As the mother of three, she has an affinity for optimizing women’s health and wellbeing, especially during pregnancy and beyond. Abu-Sbaih provides pediatric osteopathic manipulative medicine (OMM) for infants and children at the Academic Health Care Center located on the NYIT-Long Island (Old Westbury, N.Y.) campus and at St. Barnabas Hospital and Clinic in the Bronx where she supervises residents and students on clinical rotation.

Abu-Sbaih is interested in social medicine and is the faculty mentor for the Physicians for Human Rights Club. In addition, she is a member of the Center for Global Health at New York Tech and has provided care for refugees abroad.

Abu-Sbaih is also on the Board of the Sutherland Cranial Teaching Foundation (SCTF) and has taught osteopathy in the cranial field nationally with both the SCTF and the Osteopathic Cranial Academy. She provides OMM for trauma sequelae, ophthalmic, ENT (ears, nose, throat), neurologic, respiratory, and gastrointestinal complaints.

Abu-Sbaih graduated from the State University of New York at Buffalo with a Bachelor of Arts in Biology and a minor in cultural anthropology in 1993. She studied liberal arts at Birzeit University in Birzeit, Palestine, and graduated from the New York College of Osteopathic Medicine in 2001 after completing a one-year OMM fellowship. In addition, Abu-Sbaih completed a one-year rotating internship at Lutheran Medical Center in Sunset Park, Brooklyn, N.Y., and her OMM/neuromusculoskeletal medicine residency training at St. Barnabas Hospital in the Bronx, N.Y.