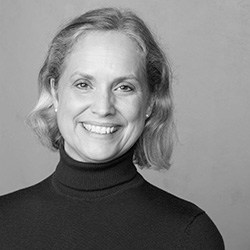 Patricia Kooyman has been the First Year Osteopathic Manipulative Medicine (OMM) curriculum coordinator at NYITCOM since 2008. In collaboration with the entire OMM Department, the faculty team works together to create the most optimal learning environment for the students’ intellectual and hands-on learning of OMM. Kooyman teaches all four years of osteopathic medical students, teaches for continuing medical education (CME) courses, participates in ongoing research projects, and treats patients of all ages at the Academic Health Care Center (AHCC) at NYIT-Long Island. Kooyman is a member of the American Academy of Osteopathy, the American Osteopathic Association, the New York State Osteopathic Medical Society, and the Osteopathic Cranial Academy, where she is also proficiency certified.

A graduate of Connecticut College, with major areas of study in both Dance Performance and Psychology, Kooyman later went on to complete a post-baccalaureate, pre-medical program at Columbia University. She then matriculated at NYIT College of Osteopathic Medicine, where she was selected to be an OMM pre-doctoral teaching fellow. In 2006, she completed her specialty residency training in Neuromusculoskeletal Medicine and Osteopathic Manipulative Medicine (NMM/OMM) at St. Barnabas Hospital (Bronx), where she also served as co-chief resident. Kooyman worked in a private OMM specialty practice in New York City from 2005 to 2008, treating all ages.