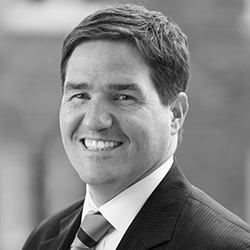 As vice president for development and alumni relations, Patrick Minson, M.B.A., M.P.A., is responsible for NYIT fundraising programs that support and grow the institution’s resources, reputation, and institutional success while ensuring its overarching commitment to students. A major part of this effort includes fostering relationships with alumni around the world and leading the institution’s response to the evolving philanthropic landscape, stakeholder interests, prospect agendas, and institutional needs, with the ultimate goal of taking NYIT to the next level of success in terms of donor and alumni engagement.

From 2014 to May 2018, Minson served as the chief development officer at Wagner College in Staten Island, where he oversaw the implementation and strategic planning of a $60 million capital campaign. At Wagner, he also increased overall giving, reunion giving, and total number of donors there. Prior to that, Minson was the director of major gifts for The Children’s Aid Society, where in four years he doubled the amount of giving from major donors. He also spent several years at New York University as associate director of major gifts for the Stern School of Business and in several positions in the College of Dentistry. Minson has a Bachelor of Science from Boston College, an M.P.A. from NYU, and an M.B.A. from Wagner.