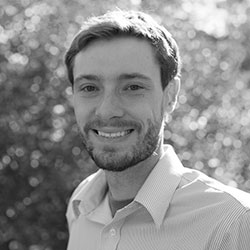 Nathan Thompson's research focuses largely on comparative biomechanics of locomotion and the evolution of locomotion in primates, apes, and humans. In particular, his research focuses on how musculoskeletal morphology is related to locomotor performance, and what differences in the musculoskeletal system in fossil apes and humans might mean for how our early ancestors moved and interacted with their environment. Thompson's previous work has shed light on the evolution of bipedalism in humans, and how features of bones, muscles, and organs in modern humans are related to efficient bipedal walking. His research draws heavily on experimental analysis of locomotion in living primates and apes using cutting-edge 3-D methods to quantify movement both in laboratory settings and in the wild.