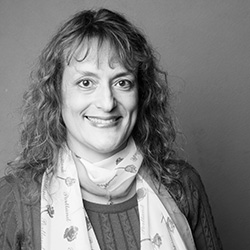 Maria Plummer is a board certified pathologist who teaches extensively at the NYIT College of Osteopathic Medicine. She is also involved in teaching Physician Assistants in the School of Health Professions. She has been at the NYITCOM full time since 2008, and teaches both the patient-based learning and lecture-based curricula. She is associate course director for the Foundations of Osteopathic Medicine, and has received several annual teaching awards. She completed a Health Policy Fellowship in 2014 from the Ohio Heritage College of Osteopathic Medicine and sponsored by NYITCOM, and also became a Harvard Macy Institute Scholar in Medical Education in 2015.

Plummer has participated in various research projects involving cadavers, which include: prevalence of serrated adenomas, seborrheic keratosis, chronic diverticulosis, histological changes in sun-exposed skin, and histological changes in chronic renal disease. She has also been involved in medical education research on mindfulness as a determinant for medical students in choosing a specialty in primary care. She has been editing sections of the text book, 5-Minute Clinical Consult. She is a member of the admissions committee at NYITCOM, and also served on the biosafety and grievance committees. She is faculty advisor to the American Medical Students Association, Students Organization for Hematology and Oncology, and the Gold Humanism Honor Society. She is also a member of the AMA, College of American Pathologists, and American Society of Clinical Pathologists.

Prior to working at NYITCOM, Plummer was an attending pathologist at Winthrop-University Hospital in Mineola, NY and a staff pathologist at a national private laboratory. She graduated with an M.D. from the University of Medicine and Dentistry of NJ-Robert Wood Johnson Medical School (Rutgers) in 1990. She received her bachelor’s degree in Biology in 1986 from Vassar College in Poughkeepsie, NY.

Plummer was appointed to the Board for Medicine of New York State in September 2016.