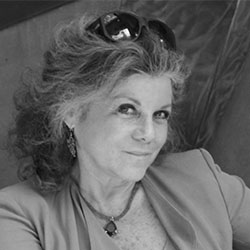 Lynn Rogoff has been in the forefront of the confluence of art, technology, communications, and business with ground-breaking film, television, and multimedia content. Her work has been influential in introducing American history, social causes, and culture to several generations.

Rogoff oversaw the building of an interdisciplinary team with NYIT School of Management, resulting in  Green Kids Media winning the People’s Choice Award at the New York State Business Competition in 2012. Amerikids USA has been awarded a prestigious package of hardware, software, and support from Open Source Virtual Reality in conjunction with NYIT’s HIVE.

Her film, No Maps on My Taps, aired nationally and internationally for a decade and was honored with two Emmy Awards. Rogoff won a nomination for outstanding writing achievement from the Writers Guild of America. She has worked as writer, producer, and director on Sesame Street, Big Blue Marble, and Watch Your Mouth in the U.S. and Rechov Sum Sum in Israel (Israeli Sesame Street).

Rogoff received her M.F.A. in directing from NYU School of the Arts.

Courses I Teach/Have Taught at NYIT