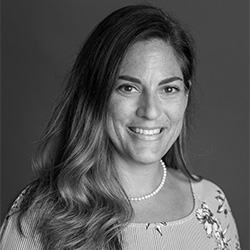 Lori Hochman received her B.S. from Tulane University with a major in psychology in 1994. She completed her B.S./M.S. in Physical Therapy from Long Island University in 1998, and in 2018 she completed her Doctor of Philosophy in Physical Therapy at Nova Southeastern University in 2018. Before joining New York Institute of Technology, she served as the executive director of clinical education and as a clinical assistant professor at Stony Brook University for nine years.

Upon entering the profession, Hochman worked at Southside Hospital in Bay Shore, N.Y., treating patients recovering from a wide variety of neurological and orthopedic impairments. She spent several years as the clinical specialist in the brain injury unit before becoming the rehabilitation supervisor of the inpatient rehabilitation unit. She received her certificate of competency in vestibular rehabilitation in 2002 from Emory University and, in 2006, became a board certified neurological clinical specialist from the American Board of Physical Therapy Specialties. In an effort to provide evidence-based care to individuals living with Parkinson’s Disease (PD), she completed her LSVT BIG® certification and a coaching certification through Rock Steady Boxing. Hochman opened a specialized practice in Commack, N.Y., with her long-time colleague, Susan Thomas, DPT, to help people fighting PD and other neurological disorders. For the past seven years, she has also she worked with individuals with spinal cord injuries (SCI) through a non-profit organization called Empower SCI that runs a two-week residential rehabilitation program on Stony Brook University's campus each summer.

Presently, Hochman is the director of clinical education, responsible for the administration and coordination of the four clinical practice courses. Her research interests include neurorehabilitation and the use of technology to augment recovery.

Courses I Have Taught at NYIT