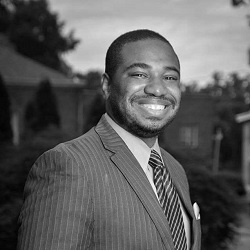 Both inside and outside the classroom, Jamel Vanderburg, M.P.A., is a staunch advocate for civic engagement and has helped to foster an engaged New York Tech student body. This includes creating opportunities for students in his Foundations of Inquiry class to learn the importance of media literacy and understand the difference between facts and sensationalism. In 2020, he also played a key role in helping to organize a New York Tech Votes event where students fact-checked the presidential election with WABC journalist Bill Ritter.

Since 1999, Vanderburg has been the owner of Tutoring For Success, which has been geared towards helping elementary, middle, and high schoolers in math. In addition, he is a founding partner of Mella Business Consultants, Inc., where he focuses on helping young professionals start, structure, and steer their businesses for success.

In 2014, Vanderburg completed a year-long professional development and leadership program with the National Urban League Emerging Leaders Program. He developed an invaluable skill set for providing innovative leadership, fundraising, and overall service to meet the challenging needs of the community.

The following year, he became a National Urban Fellow and received his Master of Public Administration (M.P.A.) from Baruch College in 2016. During this time, he honed his leadership skills and broadened his knowledge of the public sector and its policies. He currently serves as the organization's social media manager and historian, managing social media platforms and content, as well as maintaining historical documents for the 50+-year-old organization.

Vanderburg also volunteers his time and service with the Kappa Xi Lambda Chapter of Alpha Phi Alpha, Fraternity Inc., as well as the National Urban League Young Professionals. His passion for social justice has led him to tutor and mentor young students in Long Island and New York City. In addition, he co-chairs the Alumni Council Board for Young People, a fellowship designed for college students and young professionals in the social justice sector.

Vanderburg has dedicated his life to serving others. He aspires to become a change agent for community planning and development in urban areas.