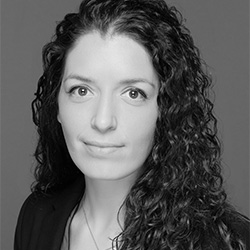 Jole Fiorito, Ph.D., specializes in medicinal chemistry, applying her expertise to novel drug discovery and development. Her research focuses on the design and synthesis of small molecules for the treatment of neurodegenerative diseases, such as Alzheimer’s disease, and cancer.

Fiorito received her Ph.D. in Pharmaceutical Sciences from the University of Catania, Italy. Following graduate school, she became a post-doctoral researcher at Columbia University in the laboratory of Dr. Ottavio Arancio, as well as in the Organic Chemistry Collaborative Center founded by Dr. Donald W. Landry. During her time at Columbia, Fiorito developed novel compounds, which were able to inhibit phosphodiesterase 5 (PDE5) enzymes and increase phosphorylation of the transcriptional factor CREB through the nitric oxide signaling pathway, which is found to be impaired in Alzheimer’s disease. Additionally, in collaboration with Dr. Owen O’Connor at the Center for Lymphoid Malignancies at Columbia University, Fiorito generated a library of small molecules acting on histone acetyltransferase (HAT) enzymes, which play an essential role within the epigenetic mechanisms of proliferation and differentiation in cancer cells. These technologies that Fiorito has developed are patent pending and have already generated interest from the pharmaceutical industry.

Currently, Fiorito’s research interests are in developing multi-target small molecules against both HAT and PDE5 enzymes that are involved in a number of multifactorial diseases such as Alzheimer's disease and cancer. She hopes that her research will lead to novel disease-modifying therapeutics to address unmet clinical needs.