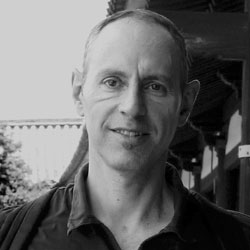 David Diamond is an architect and tenured professor at the New York Institute of Technology, where he served as Chairman of the School of Architecture from 1998 to 2011. As an architecture design studio professor, Diamond has taught at all levels of New York Tech’s 5-year BARCH Program, but he specializes in beginning design education. Diamond has coordinated or co-coordinated first and second year studio syllabi for several years. He also directs international study programs, most recently to Portugal and Spain, but he has also led student tours to France, Scandinavia, and Italy.

Diamond earned his Bachelor of Architecture at The Cooper Union, where he studied with Robert Slutzky and John Hejduk, and worked for Hejduk during his undergraduate years. Diamond completed his Master of Architecture at Cornell University, where he studied with Colin Rowe. Subsequently, he was awarded an ITT Fellowship to Italy. Diamond has worked with Richard Meier and Partners on several museum projects and with Kohn Pedersen Fox on museum and corporate projects before establishing his own architectural practice, completing several projects for not-for-profit and residential clients.