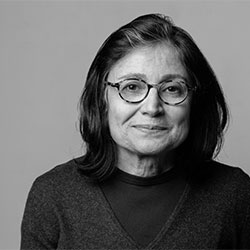 Beyhan Karahan is a practicing architect and a teacher. As the founder of Beyhan Karahan & Associates Architects, she takes the leading role and responsibility for the design of each of the firm's projects. Prior to her employment at New York Tech, she was an adjunct associate professor at New Jersey Institute of Technology and an adjunct professor at City College, Columbia Summer School in Rome, and Columbia University.

Previous to founding Beyhan Karahan & Associates Architects, she was a founding Partner of Karahan/Schwarting Architecture Company, a project Manager for Edward Barnes, and part of the architecture team of Roberto Einaudi Architetto in Rome, Italy. Karahan received her M.A. in Architecture from Columbia University.