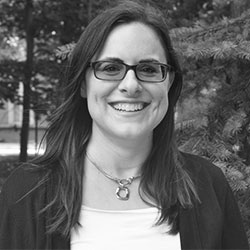 While a doctoral candidate in engineering, Adrienne McNally left her career pursuit in engineering to level the playing field for female engineers. Due to her six internships as an undergraduate and research experience in graduate school, higher education was the forum in which she felt she could effect the most change in this area. She entered New York Tech as a coordinator for Student Employment and was promoted to Director of Experiential Education. In this role, she and her supervisor developed a variety of experiential programs that bridge career and civic development. Among them is a nationally recognized internship program that prepares students for the world of work and for their roles as actively engaged public problem solvers.

At New York Tech, McNally develops and assesses the outcomes of the centralized Internship Certificate Program, including its foundation in civic engagement, delivered through the concept of employee citizenship. She works with faculty and the institution on developing programs and policies that provide opportunities for students to apply classroom learning to real-world settings and get experience outside the classroom.

Adrienne has shared her work with civic education and internship programs as a speaker at NASPA in June 2016 and 2015; LICSPA in February 2015; CEIA April 2013, March 2010, and April 2009; she also led InternBridge webinars in August 2012 and February 2010. She has a B.S. in Industrial Engineering from Northeastern University and an M.S. in Management Science from Lehigh University.