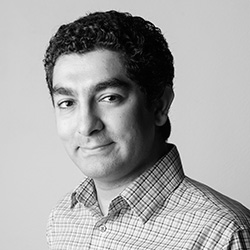 Aydin Farajidavar, is the director of Integrated Medical Systems (IMS) Laboratory and an Associate Professor of Electrical and Computer Engineering at New York Institute of Technology. Before joining New York Tech, he was a Post-doctoral fellow in the School of Electrical and Computer Engineering at the Georgia Institute of Technology. He received the Ph.D. degree in Biomedical Engineering from the joint program of the University of Texas at Arlington and the University of Texas Southwestern Medical Center, Dallas in 2011. His research experience and interest include a broad range from modeling of biological systems, to development of wireless platforms to acquire and process biological signals.

At New York Tech, Farajidavar established the IMS-Lab, where he and his students conduct cutting-edge research to develop the next generation of implantable and wearable medical devices. His research program has been supported by the National Science Foundation, National Institutes of Health, Auckland Bioengineering Institute, and New York Tech. He is teaching fundamental electrical engineering courses such as electronics, digital circuits, etc. He has developed a novel course entitled "Implantable Medical Devices: An Embedded Systems Approach" to infuse research into teaching, and educate the new generation of students on trending issues such as health and medicine. Farajidavar's research has been highlighted by various awards, news articles, magazine articles, etc. His students have been consistently awarded locally, nationally, and internationally, and been hired in leading engineering firms and companies.

Farajidavar has authored more than 50 peer-reviewed journal and conference papers/abstracts, and is a member of the Institute of Electrical and Electronics Engineers (IEEE). He has served as the reviewer for government funding agencies, Journals and conferences. He serves on the Technical Program Committee (TPC) for MTT-10 of IEEE MTT-S, and Microwave Theory and Techniques Society. He has served as organizer and TPC member for several IEEE conferences, including IEEE EMBC, BioCAS, IMBioC, RWW, IMWS, WAMICON, to name a few.