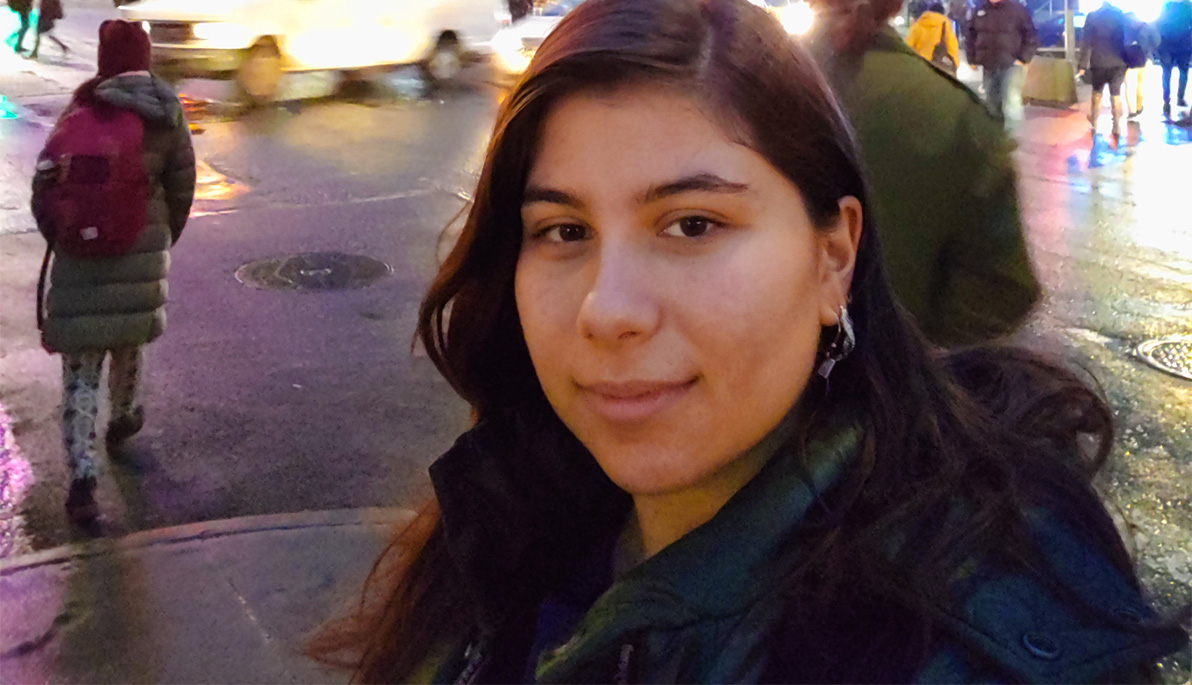 On a Mission to Save the Planet

Environmental activist and biology student Anna Makedonska is blazing trails in the science world and advocating for a better, cleaner planet.

From doing independent research on environmental policy and current events to sharing findings on her blog and belonging to several impactful environmental groups, Makedonska has dedicated her time and resources to make a positive impact on the planet.

“If politicians, journalists, and citizens around the world weren’t going to care, then I decided I would show them why they should care,” said Makedonska, who strives to get others involved in the fight against climate change.

Makedonska takes an interdisciplinary approach to science and biology, describing her work as “where gene-editing meets environmental conservation.” The Box sat down with her to hear more about her passions, experiences, and plans for the future.

What led you to study biology at New York Tech?
To me, New York Tech’s central location in Manhattan is synonymous with the opportunity to meet people. Making connections and networking is something that many students overlook until the later years of their degree. The most unique thing a university can give you is the people. Hence, why I chose New York Tech. Even though it’s not a big school, there are many great professors, I have downtown Manhattan as my campus, and you just can’t beat that!

I chose to study biology because I was inspired by a teacher. It was in my sophomore year of high school, and I vividly remember the moment I decided that I would pursue biology as a major. It was early on in the school year, and we were on our first major topic, the structure of an animal cell. The teacher had this colorful sketch on the whiteboard that I was attempting to copy in my notes, and she was explaining something about one of the structures. I don’t remember what she said, but I remember the enthusiasm with which she was speaking regarding this structure. The passion this teacher had for biology had me thinking, ‘If she can love biology so much, then there must be something really special about it.’ And indeed, there is something really special about biology, as I keep discovering the longer I study.

How did you become interested in helping the environment?
Growing up, my mom always talked about the importance of recycling and caring for the environment. Meanwhile, my grandma had her garden where she grew vegetables, so I saw first-hand what sustainable living is and how easy it can be, though I didn’t associate that terminology with my life at the time.

Fast-forward over a decade to July 2020. There was an oil spill near the coast of Mauritius, an island nation in the southwestern Indian Ocean. An estimated one thousand tons of oil spilled into coastal waters that harbor coral reefs, mangrove forests—both of which are endangered ecosystems worldwide—and a national park. Local news agencies began raising awareness on social media immediately, and I learned about the oil spill from some small Instagram accounts that I follow. It took big news agencies like NBC and BBC weeks to first report on the spill. The articles were forgotten within days. I had done a research paper in school about coral reefs and understood the gravity of the situation. Needless to say, the lack of initiative and interest outside the ocean conservation community appalled me. I was angry, so I decided to do something about it. If politicians, journalists, and citizens around the world weren’t going to care, then I decided I would show them why they should care. That’s how I first got into environmental activism.

Tell us more about your recent environmental projects.
I’ve written research reports in some classes, which first helped me start on the journey of environmental activism. More prominently, however, I launched a science blog in late 2020, where I write articles in four subject areas, two of which are ocean conservation and climate change. The blog is still a work in progress, but the goal is to get people informed and talking about these issues. My theory is that, at some point, laws are going to be written and voted on. How are people going to vote on laws about coral conservation or carbon dioxide emissions if these aren’t topics they are familiar with? In short, any decision made on the part of the general public will not be well-informed if people don’t know the importance or severity of the problems facing the environment and don’t know what potential solutions could arise.

What are some of your science-related extracurricular activities?
I feel like I live, eat, and breathe science! I’m part of organizations like Beneath the Waves, which does shark conservation research, and the Planetary Society. I support other organizations such as Mission Blue, which focuses on creating marine protected areas (the newest addition being the Great Barrier Reef). I’m also a part of the New York Tech Green Club, and I look forward to getting a lot more actively involved post-pandemic.

How has New York Tech prepared you for life after graduation?
I’m the kind of person who is looking to create an interdisciplinary field where gene-editing meets environmental conservation. As far as I know, very few people around the world do what I want to do, so I don’t expect to have a professor who researches to identify heat-resistance genes in corals with CRISPR. However, what I do think New York Tech does right is encouraging interdisciplinary, out-of-the-box thinking. Many of our school’s core classes put students from all majors in the same classroom, which, in my opinion, is highly underrated. This combination of putting different minds together and encouraging curiosity, as well as the people component discussed above, gives me the tools to go out and succeed at saving the world.