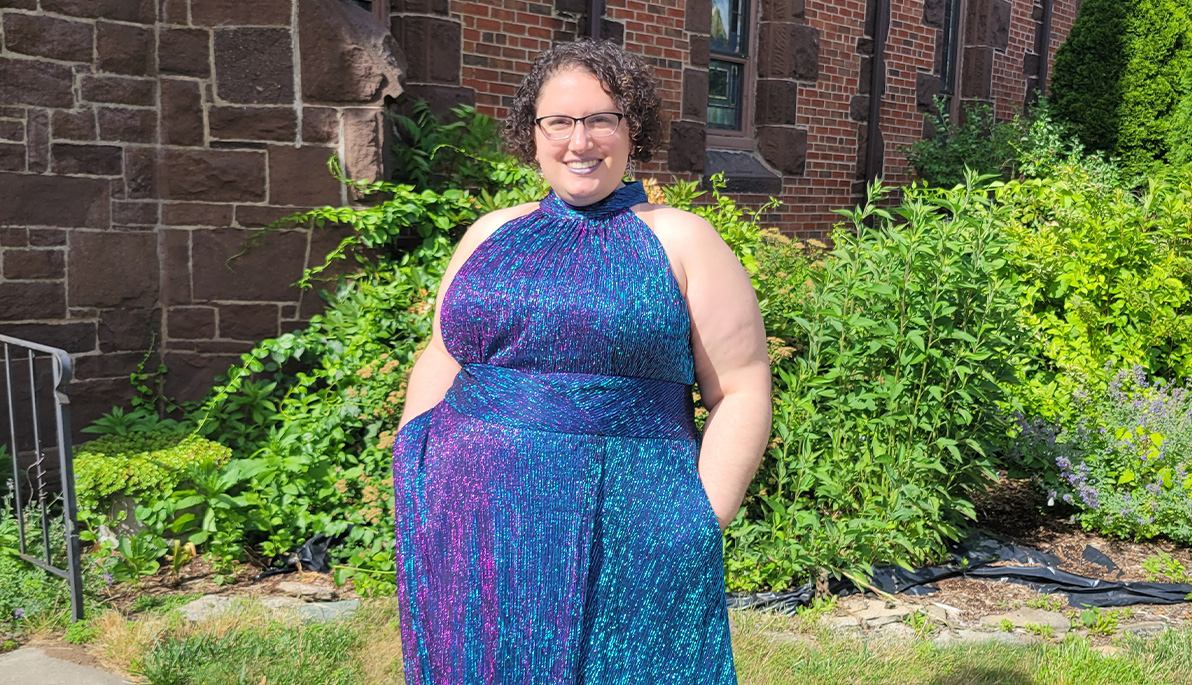 On June 1, 2022, Rachel Morrison (M.S. ’15) was named the new director of the program, an office she joined in 2009, first working as an administrative assistant and then as a counselor. Before coming to New York Tech, Morrison was busy earning a bachelor’s degree in psychology and minors in math and art history and architecture at New York University, hoping to pursue a career in education.

New York Tech News sat down with Morrison to learn more about her role in this important program, which has 68 students participating in the 2022-2023 academic year, as well as her experience at New York Tech.

What are your responsibilities as director of HEOP?
The number one responsibility is being passionate about the program and our students.

HEOP is jointly funded by New York Tech and the New York State Education Department. An important responsibility is making sure that we are always in compliance with policies and expectations and that we are recruiting the right students.

The program is meant for academically and economically challenged students who reside in New York. We are here to work with the students who, when they apply, may not be meeting New York Tech’s admissions criteria at face value. HEOP works closely with the Office of Admissions, and we have a liaison in that office. We can take a second look at applicants and go a little bit deeper and do some placement testing and interviews. We look for those students that have the potential to do well here with the additional support of the program. HEOP participation includes individual and group counseling, tutoring, a five-week pre-freshman summer program, and many other activities planned throughout the year.

Are you still dealing with impacts of the pandemic?
We have 15 first-year students this year; we could have as many as 20. The last two years have been rough on opportunity programs statewide. For institutions in the New York City region, COVID exacted a big hit on programs like HEOP because a lot of people who would have gone to school opted not to, also a lot of students who potentially would have looked at private colleges opted to instead go to “cheaper schools,” with the sad reality being that they actually might have saved more money being in our program because we can give them extra financial support. My hope is next year, we will be back up to a full first-year class.

On the bright side, we have two transfer students committed for fall with the potential for more in the spring.

How would you describe your career progression at New York Tech?
I have been at New York Tech with HEOP since late 2009, starting as the administrative assistant for the program. I did that for about five and a half years. While I did that, I decided to earn my master’s degree at New York Tech at night. And it just worked out that as I finished that degree, our counselor at the time decided to leave. I had seen her do the job, and it fit well with what I was interested in. So, I thought, I am going to throw my hat in the ring, and it’s great if I can get it, and I did!

I am back in graduate school again right now. I am halfway through the program to earn an MSEd in higher education administration at Baruch.

Can you recount an instance when the true impact of HEOP most benefited a New York Tech student?
It is so difficult to point to just one person. HEOP students all come in with such unique circumstances; there is no cookie cutter for the difficulties they will face and how we work to help them overcome them. I have certainly been here long enough to see whole cohorts of students go from the first year to graduation, which is my favorite day of the year. I love seeing my HEOP students graduate.

One year, at our HEOP graduation lunch, a student speaking to the group said, “I’ll never forget what Rachel said to me. Rachel told me to be an adult. And that really stuck with me, and from that moment on, every time I had a conversation with an advisor or anybody else, I just approached it as if I were an adult, even though I did not think I was.” That is where the impact really comes through, when you figure out what students got out of the program.

How has your New York Tech education helped you in your career and life?
I earned a master’s degree in human resources management and labor relations at New York Tech in 2015 and have been an adjunct instructor for the last seven years, teaching Foundations of Inquiry. And my husband earned his M.B.A. from New York Tech in 2022.

From my master’s degree, I gained a great deal of confidence in terms of understanding employment law and heathy workplace practices, which helps me in counseling HEOP students as well as directing the program. And all this experience has helped me be okay with not knowing what my next move may be.

How do you spend your free time?
I describe myself as a big nerd. I love board games. Our apartment is full of them. A few of my favorites are Ticket to Ride and Terraforming Mars. I also love video games and traveling, and I often spend my vacation working at conventions like New York Comic Con. I also often work at board game conventions. One of my other hobbies is crafting; right now, I am enjoying painting and cross stitch. My home and office are full of things I’ve made.

What is your proudest career moment?
I have had many jobs in my time at New York Tech and love the opportunity to serve as HEOP director, which of course, just started a few months ago. But my proudest career moment so far may be when I became a HEOP counselor because then I knew where I wanted my career to go.