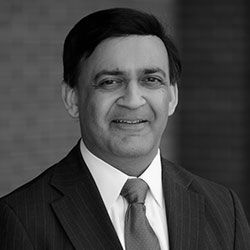 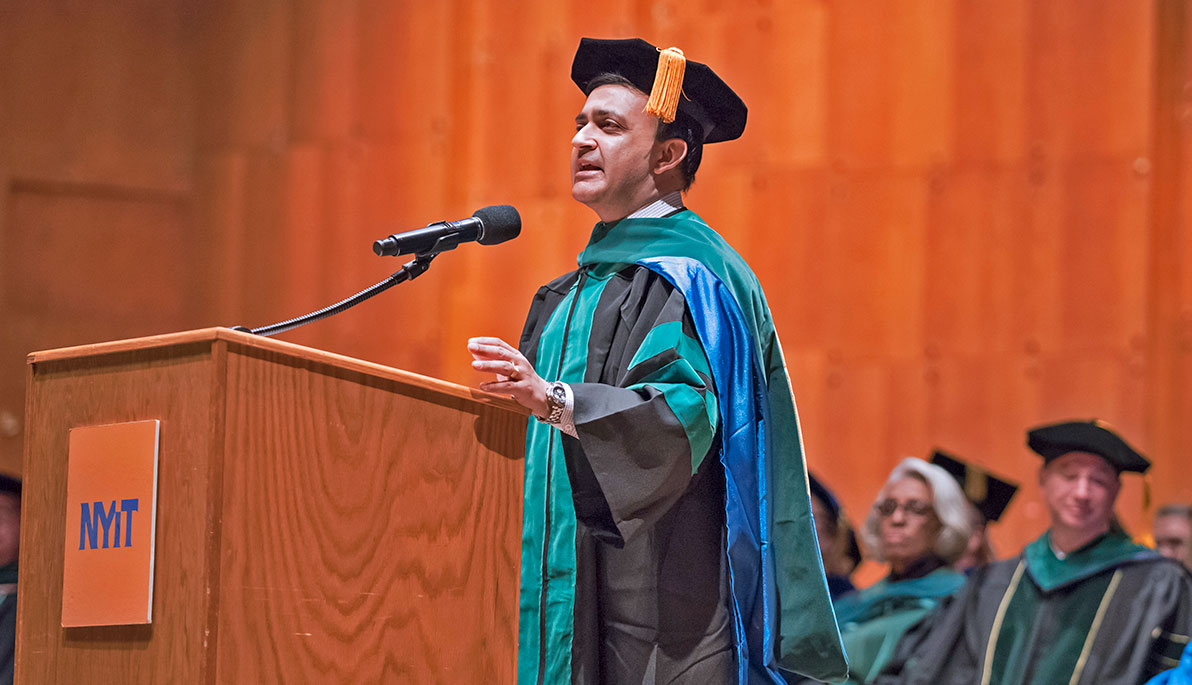 On Sunday, May 21, 2017, the university presented Humayun J. Chaudhry, D.O., with an honorary degree at the 56th commencement ceremony. The next day, the lauded physician and CEO of the Federation of State Medical Boards (FSMB) saluted NYIT College of Osteopathic Medicine’s (NYITCOM) Class of 2017 at the annual hooding ceremony, advising the fledgling D.O.s. to “know that medical science will continue to progress and advance alongside you. The explosion of medical information also means that you will need to find the time to keep up with what is happening around you.”

No one knows this better than Chaudhry himself, whose own path has taken him far from medical school and then back again. “My advice to alumni would be to keep your options open—you never know what you’re going to be doing in 10 or 20 or 30 years,” says Chaudhry. At FSMB, for example, he oversees the organization that represents the nation’s state medical licensing boards and co-sponsors the United States Medical Licensing Examination. “Little did I know as a student taking these exams that I would one day be running them,” he says. “It’s the same thing as an educator—I didn’t know as a student that one day I would come back to NYITCOM and be interviewing prospective students as an assistant dean.”

In addition to his current role at FSMB, Chaudhry’s career has included positions as director of medical education at Long Beach Medical Center, commissioner of health services for New York’s Suffolk County, assistant dean for Pre-Clinical Education at NYITCOM, and physician and medical educator in the United States Air Force Reserves. Along the way, he earned his M.S. in Health Care Management from Harvard School of Public Health, embraced public service and banned trans fats (in Suffolk County in 2009), learned how to interact with the media, and continued to educate young doctors.

He’s also become a stalwart advocate for physicians’ mental health and wellness, a cause that recently brought him back to NYITCOM. In 2016, students proposed the idea of developing a healing path on the Long Island campus near the medical school's buildings. When complete, the path will provide students and other visitors with a space to reflect and “take inventory of our own personal needs, wants, hopes, and dreams.”

When Chaudhry was approached about the project, he immediately got involved. “It’s unconscionable that what amounts to a planeload of physicians commit suicide every year,” he says. “I am especially moved as an alumnus by the students who are working with Dr. Balentine [Vice President, Medical Affairs & Global Health] and Dr. Gilliar [Dean of NYITCOM] on the healing path. That it’s coming from the students is particularly important—students are smart, but they need to know that the university will help them with mental health.” Not only did Chaudhry donate funds to get the project off the ground, he was also inspired to write a poem about the importance of physician well-being, and when the path opens, the Healing Path Observation Area will be named in his honor.

Chaudhry is also trying to address the issue of physician mental health on the national level through FSMB. “Physician health, if you think about it, is a patient safety issue,” he explains. “Physicians need to know that you can get the care you need and that it doesn’t have to jeopardize your practice or license. It’s also important to raise awareness with employers—their doctors may need some time off or time to themselves.”

His drive to positively affect such a large community helps explain Chaudhry’s successful transition from the exam room to the boardroom. “I still have my medical license, but I don’t practice care on one person at a time anymore,” he says. “My mother will ask me, ‘Don’t you miss patient care?’ And I do, but in many ways, I am delivering care indirectly through my work—and not just to one person, but to 1000s, or even millions, indirectly.

Coming back to campus this spring, however, Chaudhry was the one affected. “What’s fascinating to me is that every time I go back to the campus, the energy of the students is so palpable. Everybody is talking with books and laptops in their hands—it keeps you on your toes,” he says. “I’m touched beyond words to have received an honorary doctorate. As an NYITCOM student, alumnus, and a former assistant dean, you could say NYIT courses through my veins. Being an alum of NYITCOM means being one of more than 7,000 graduates and part of one of the biggest medical schools in the country,” he says, then adds, “And my parents are particularly grateful that this doctorate degree didn’t cost any tuition!”

Stay tuned for more about the Healing Path when it breaks ground soon.