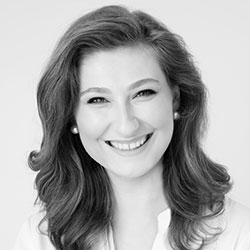 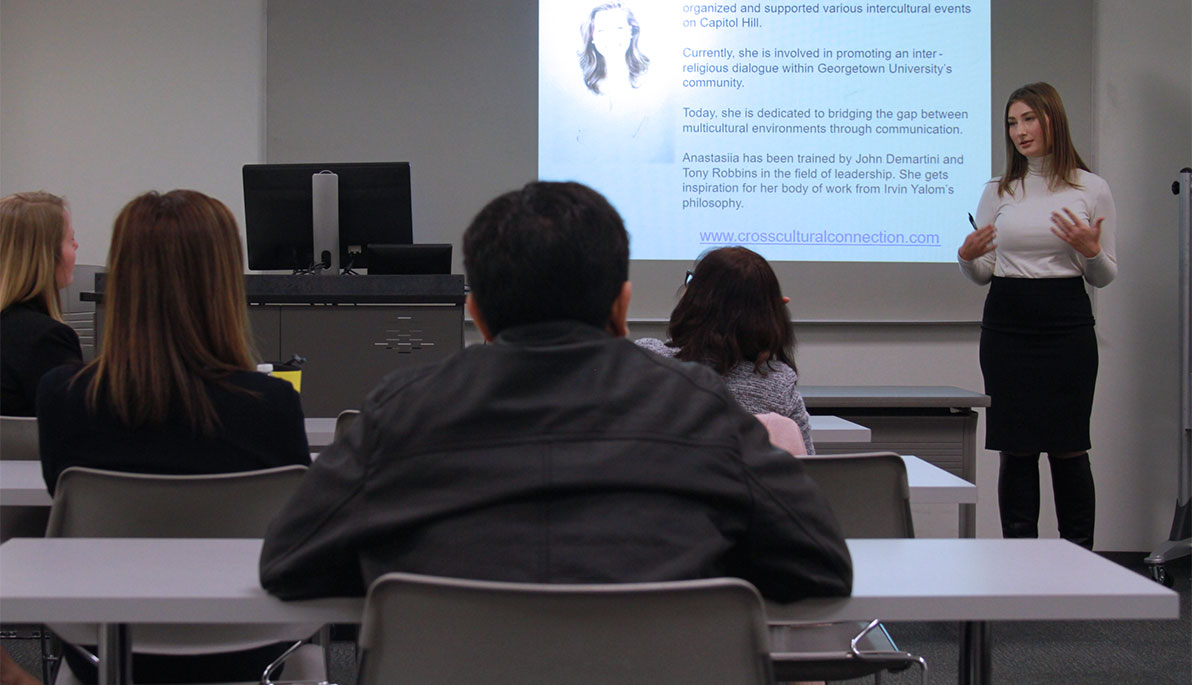 Networking Her Way Around the World

Anastasiia Stoiatska (B.S. ’11) grew up in Eastern Europe, went to college in the Middle East, and now works in Washington, D.C. Her multinational background led her to discover the importance of intercultural communication, which prompted her to launch a business to teach others about the field. She is also the events and program coordinator at the Prince Alwaleed bin Talal Center for Muslim-Christian Understanding at Georgetown University. She recently visited NYIT-Manhattan to give a workshop on networking skills as part of International Education Week. Stoiatska sat down with The Box to discuss her experiences with different cultures and nations and networking tips.

Why did you choose to attend NYIT?
I wanted to go to an American university, but I wanted to be closer to home [Ukraine] than [go to] the States. I had a network of family and friends in Jordan, even though I wasn’t from the region. NYIT’s Amman location was the only university at the time that taught in English in Jordan. It seemed like a great idea because I wasn’t sure where I wanted to live and American universities are usually highly accredited. It sounded like it would be a great fit.

What was your first job after graduation?
I happened to tell some friends that I speak Arabic, and they connected me to a job opening with the royal family of Saudi Arabia. I had an American degree and I spoke Arabic, but I wasn’t Arab. To the royal family, that was a perfect combination. That’s how I became their special assistant and began working on a public policy and communications strategy.

What brought you to Washington, D.C.?
It seemed like a better fit for employment opportunities to combine public policy and communications, the niche I was interested in. But when I moved to the States, because of cultural differences, it was difficult to adjust, so that’s how I got into intercultural communications.

Through my personal and work experiences, being an immigrant and looking for my first job in D.C., I learned to build myself up and figured out how to communicate and network with other cultures because I had no connections in America.

Why did you start your business, Cross-Cultural Connection?
I was dealing with intercultural communication on a constant basis, and I saw the need for assistance. People on my team struggled with it, and a lot of first-generation immigrants would tell me about cultural conflicts with their parents. I was also interacting with people who were in their fifties and having the same issues as people in their twenties .

I realized that there should be a solution for it. I found a few courses and pieces of literature about how to overcome those personal and professional differences, but it was all theoretical and nothing was applicable instantaneously. [Instead] I started suggesting the strategies that have worked for me. When I hear success stories from people using the tools I provided them with, that is the biggest reward. That is why I decided to go bigger with this.

What is an example of a cultural difference you have encountered?
Sometimes Arab students wouldn’t show up to recruitment events at Georgetown if alcohol was being served or the events were too late in the evening. They were afraid someone in their group would tell their friends that they went. To them, their personal connections are much more important than work connections. It’s very hard for us to understand.

We started to do events during the day, but still, no one would come. Asking for help can be seen as shameful, so they didn’t want to make the extra effort of making an appointment with a career counselor. Also, a lot of these students already had a job at home. How could the counselors get the students who did need a job to get career help? We found that it was better to just show up at their departments [and meet with them there].

What prompted you to return to NYIT and give a networking skills workshop?
I met Amy Bravo, senior director of International and Experiential Education, about a year ago. She was in Washington, D.C., at an alumni event. We started talking. I was still establishing my business. She said, “You have some value; we can collaborate when your business is up and running.”

What was it like to return to NYIT and give advice to students?
It was great. It’s good to show them that networking and job hunting can be successful if you do your homework.