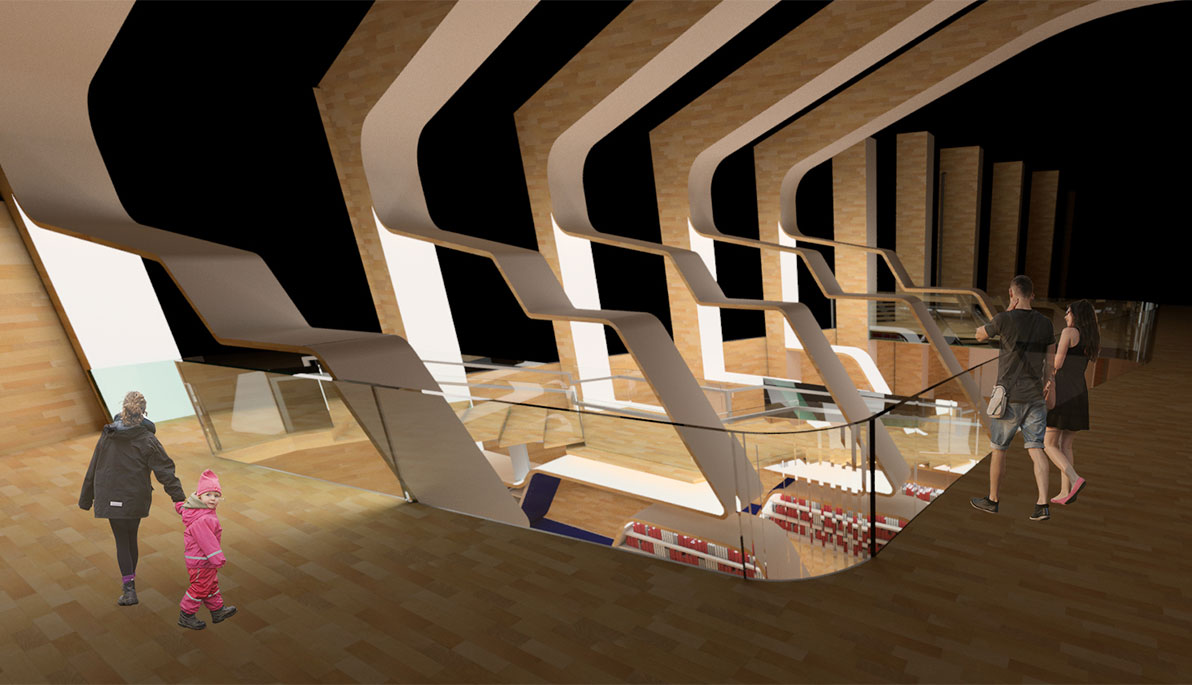 Photo: John Sanchez's winning entry: a concept for a new staircase in the Vennesla Library and Culture house in Norway.

Two interior design students from NYIT School of Architecture and Design have been awarded the prestigious Angelo Donghia Foundation Scholarship for 2016. John Sanchez and Lana Kravtchenko, both entering their fourth-year, will each receive up to $30,000 to put toward tuition and living expenses during their final year of studies.

This is the fifth time in six years that an NYIT student has earned the highly coveted scholarship, and the first time that both of NYIT’s nominees have won. “It’s amazing to have two winners this year,” said Associate Professor Martha Siegel, chair of the Department of Interior Design. “Donghia only names 15 winners, representing design programs across the country. That means our two are among the top design students in the country.”

Sanchez’s submission, a concept for a new staircase in the Vennesla Library and Culture house in Norway (see slideshow), emerged from a Design Studio project with Siegel. The building incorporates strong architectonic language, with a roof comprising wooden “ribs” that become seating/shelving as they descend to the floor. Sanchez focused on making the space more dynamic; he expanded the opening between the two floors, inserted a gradually descending sinuous stair, and pulled the ribs and seating down to the level below.

Sanchez, who was inspired to pursue interior design by his mother’s career as a visual artist, has always been interested in spaces and interiors. “The idea of being able to capture an emotion through space fully spoke to me,” he wrote in his submission essay for the Donghia Foundation. “I envisioned spaces where I could alter moods, make safe havens for those in need, and make them functional, beneficial and comfortable for inhabitants. I had the ability to create more than just a shell, I had the ability to shape lives.”

Brooklyn native Lana Kravtchenko’s winning submission, “Urban Sanctuary” (see slideshow), grew out of a seating design project she originally developed in a furniture design studio taught by Associate Professor Robert Allen. Inspired by the flawless, natural “design” of a turtle shell and wabi-sabi (the Japanese concept of accepting imperfection), Kravtchenko designed seating for six. “My approach involved a modular seating construction for maximum flexibility and interaction,” she says in her proposal. “These two ideas helped create a balance between the seat, an ever changing variable, and the atmosphere, which remains stationary. The result created a nurturing environment where people can adjust, communicate, and grow together.”

The daughter of Russian immigrant parents, Kravtchenko grew up in New York City and became well acquainted with the overcrowded, urgent, and stressful lifestyle. One place Kravtchenko often visited growing up was Rockaway Beach. “A favorite part of my beach explorations was discovering the many abandoned buildings that inhabit the area,” she said. “My dream was to become a designer and one day breathe life into these forgotten areas…to take abandoned things and make the most out of them.” Those experiences led her to create a space that could provide comfort and solace while simultaneously sparking communication and conversation.

The Angelo Donghia Foundation was established by Angelo Donghia, the internationally renowned interior designer. Created in 2002, the scholarship benefits talented students entering their final year in an accredited undergraduate interior design program. “The idea is to honor students with great potential,” says Siegel. “It gives the winners a big boost at a very critical time in their academic development. It allows them to focus on their studies, and gives them time to really work on their thesis.”

“To win this prize is amazing,” says Sanchez. “I can’t tell you the freedom and peace of mind it gives me to be able to put more energy toward my work and studies.” For the past two years, Sanchez has worked while also going to school; at times, he’s held down two jobs while balancing a full course load. “Being the first person in my family to graduate with a college education would be a success and honor for everyone in my family,” said Sanchez. “NYIT has changed my whole perspective on life. It has really made me believe I can have a future, doing something I can believe in.”