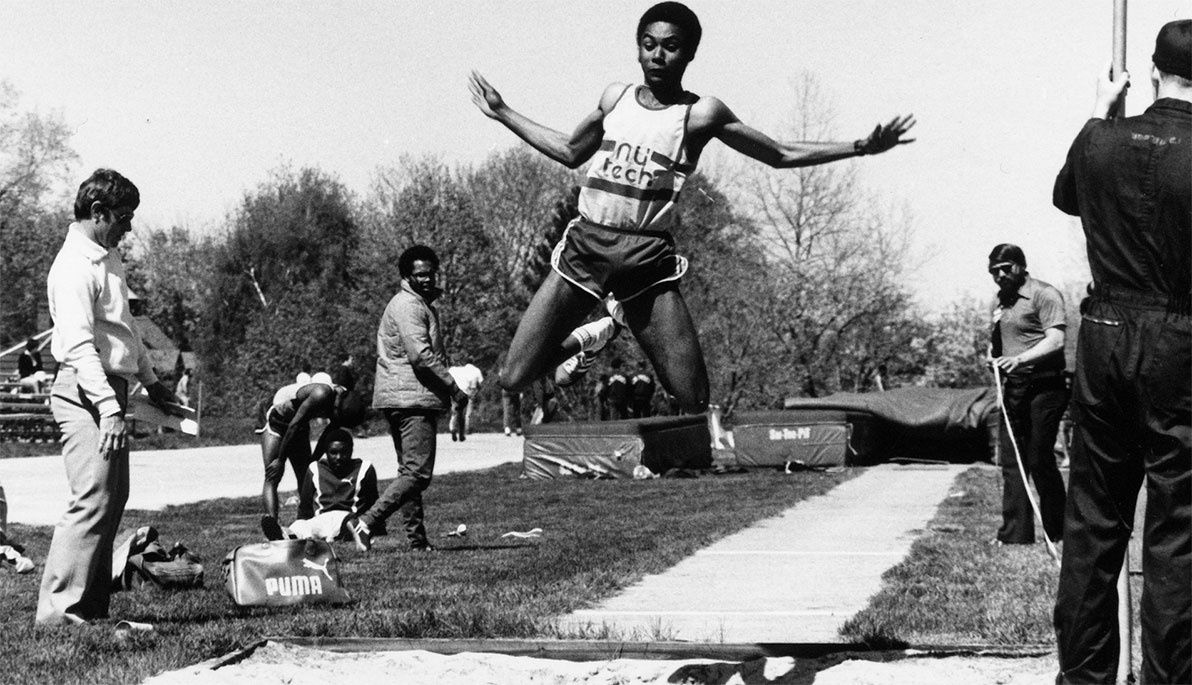 Pictured: A student-athlete competing in the long jump in the 1970s.

NYIT’s storied track program, which sent sprinters to five Olympic Games in its heyday, is returning after a 14-year absence.

Men’s and women’s track will relaunch and compete in mid- and long-distance events beginning with the 2018-2019 indoor season.

Sprint as well as field events will be phased in over ensuing years as the roster grows and planned enhancements are made to NYIT facilities.

The relaunched teams initially will be composed primarily of existing cross country participants.

The program also garnered 27 Division II national champions and more than 300 All-Americans in indoor and outdoor track over a three-decade span.

“Our goal is to compete at the highest levels in the East Coast Conference and nationally,” said Dan Vélez, director of athletics and recreation. “We recognize the importance of indoor and outdoor track to NYIT and its alumni. The history of track at NYIT is storied and the future is bright.

“Runners want to run year-round. By fielding indoor and outdoor track teams that will compete in the winter and spring seasons, not only are we giving our student-athletes additional opportunities for success, but now we are also aiding our training and recruiting efforts in cross country by giving our student-athletes the ability to compete in ECC and NCAA Championships throughout the academic year.”

As for outdoor track, Clarke continues to hold the third-best 400 time in D-II history at 44.79, which he set while representing NYIT in the outdoor championships in Abilene, Texas, on May 29, 1993.

Legendary coach Peter Zinno, who continues to assist with the cross country program, was inducted into the NYIT Athletics Hall of Fame in 2005 and the ECC Hall of Fame this past June.

“There aren’t many times I’m at a loss for words. But I’m at a loss for words,” Zinno said. “This is the most exciting news I've heard since sadly the program was dropped. I am elated not only for all our great athletes—both men and women—who have come before, but I’m excited for the institution. I know we will do special things again in the future.”

Said Cross Country Head Coach Lenroy Raffington: “I am elated. I’m speechless. This is the happiest moment since the birth of my son.”

NYIT track will compete in the ECC indoor and outdoor championships during the 2018-2019 academic year, joining Daemen, LIU Post, Molloy, Queens, Roberts Wesleyan, and St. Thomas Aquinas as well as District of Columbia (women only) and a handful of associate members.

“We are very excited to hear NYIT will be bringing back its indoor and outdoor track teams and participating in our 2019 ECC Championships,” ECC Commissioner Bob Dranoff said. “As a nationally recognized program for so many years, I know this announcement will make many NYIT track and field alumni very happy. I am confident the Bears will be a big part of these ECC sports for years to come.”

With the additions of men’s and women’s indoor and outdoor track, NYIT’s varsity sports offerings will jump from 13 to 17.

“Words cannot describe the excitement, joy, and gratefulness for having the NYIT track and field program restored,” said Austin. “Thanks to NYIT, former track and field student-athletes have excelled on the track and in life and have continued to serve communities. This is a great opportunity for student-athletes on Long Island, in the New York City metro area, across the United States and abroad to follow their passion for track and field while also becoming the great leaders of tomorrow through the excellent academic programs offered here at NYIT.”