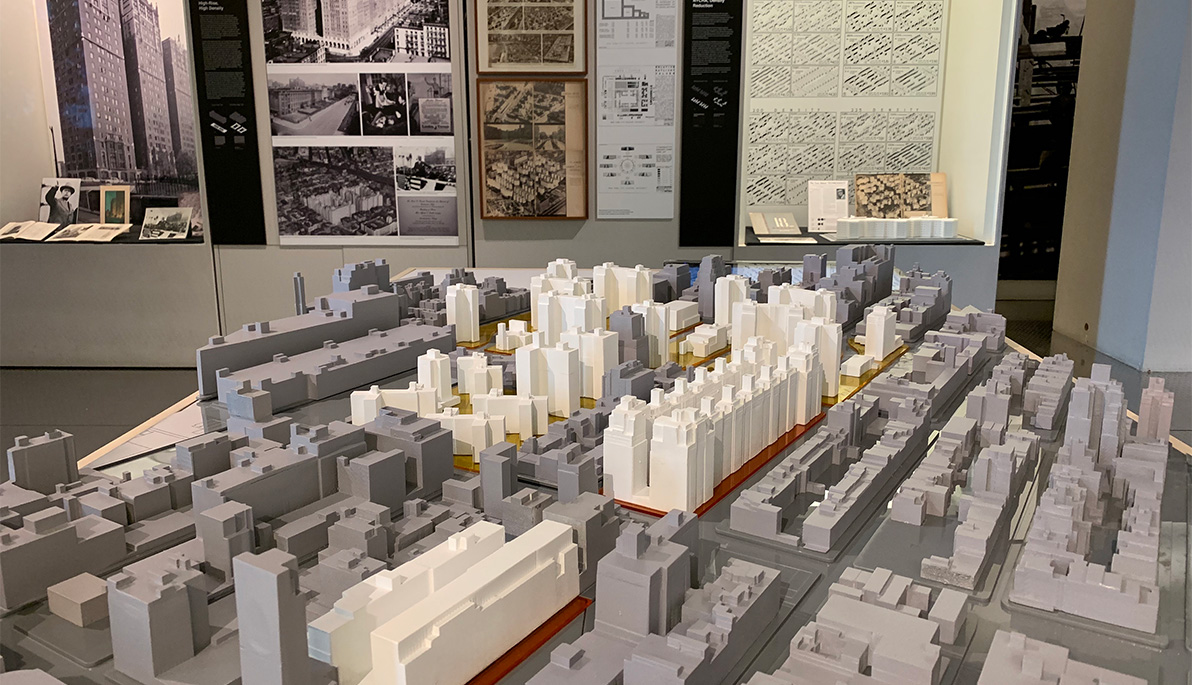 Pictured: One of the models on display at “Housing Density: From Tenements to Towers.”

When Associate Professor of Architecture Matthias Altwicker and Professor of Social Sciences Nicholas Bloom, Ph.D., were asked to curate Housing Density: From Tenements to Towers, an exhibit at the Skyscraper Museum in New York City, they saw this as the perfect opportunity for students in the Student-Led Architecture Build (sLAB) program to get involved.

The exhibit focuses on housing density in urban landscapes. It explores the difference between built density (how much ground is covered by structures) and population density (which looks at the number of people in a given area).

In the fall of 2018, 12 second- and third-year architecture students were teamed up in three groups of four and were asked to propose designs for how the exhibition would be laid out. The following spring, they were tasked with creating original models that would help museum visitors better understand housing density.

“There is a big notion that New Yorkers don’t understand what density is … and [that they] misunderstand [the difference between] density and overcrowding,” said second-year student Jhancarlos Carvajal. “Being part of an exhibit that helps clarify the distinction is very helpful for New Yorkers but also insightful for us as students to know how we want to shape our city [in the future].”

“We learned the strategies that we can use to improve the density in New York City or the options that we can apply to create more efficient housing and how that can cause an effect in the community or its context,” added Marcela Ona Sandoval, a third-year student. 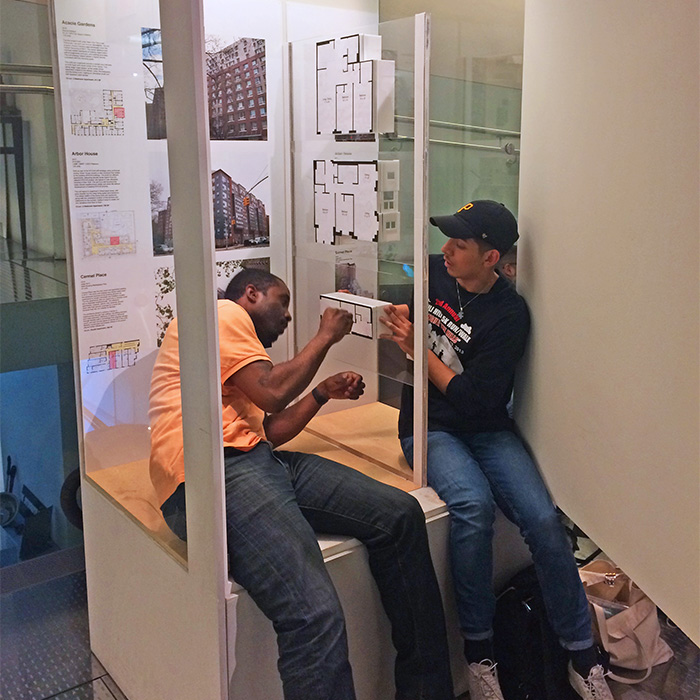 Third-year students Eddy Voltaire, left, and Anthony Rosas install one of the displays for the exhibit.

The models were of selected neighborhoods, buildings, and apartment units throughout New York. “The goal was to create a consistent feeling,” said Altwicker. “The district models intend to show the relationship between buildings and open space. The building models show how the abstract massing seen in the district model is developed with windows, balconies, etc.,” he explained.

Sandoval’s model focused on Penn South, in the Chelsea neighborhood on 9th Avenue. “Our main ideas were to show how the open space of the site is related to the building space,” she said. “The idea was to understand how significant the relationship is between open spaces and built spaces and if the open space is meant to be used or there for decoration.”

Altwicker, Bloom, and Carol Willis, founder, director, and curator of the museum, reviewed the students’ design proposals. In the end, it was a combination of all of their ideas that helped shape how the exhibit was going to be laid out.

“The students were very ambitious with their ideas, which related to a very complicated topic—density,” said Altwicker. Through this experience, they learned first-hand what it means to create a museum installation, taking into account not only the objects on display but the overall impression and narrative flow that could be understood by all museum visitors.

“It was a learning experience to take work from studio and apply it in a way that the common person would understand,” said second-year student Aimee Flanagan.

Added Sandoval, “This experience was something unique. After all the effort that you put in something, to see the final results in the museum is just great. I like that NYIT offers these kinds of opportunities to students in the earlier stages of our careers. It makes you realize that sometimes all you need is the chance to show your ideas to achieve significant results.”

Housing Density: From Tenements to Towers runs through November. Learn more about the exhibition.