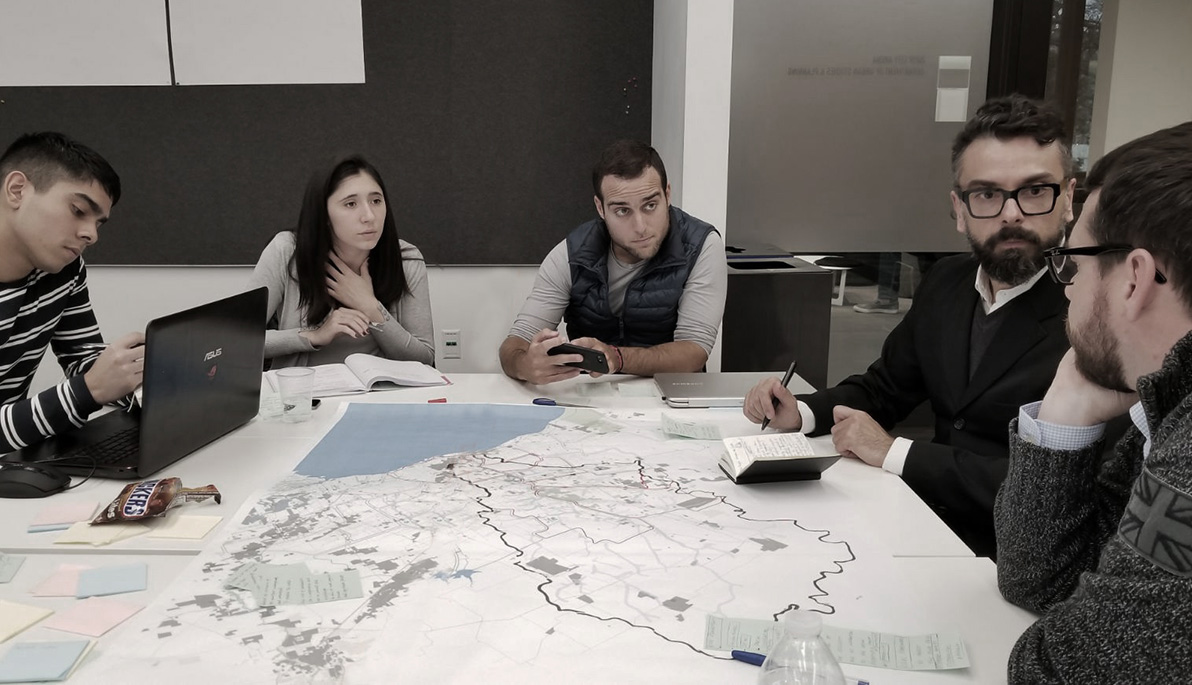 In early January, four students in NYIT School of Architecture and Design participated in an international workshop at the Massachusetts Institute of Technology (MIT) Metro Lab to broaden their understanding of architecture and explore ways of improving water services to residents of Buenos Aires, Argentina. NYIT’s participation in this project was made possible through an internal exchange agreement with the School of Architecture at Politecnico di Milano.

The two-week workshop centered on the concept of “metropolitan discipline” in the context of promoting urban planning and sustainability. During the first week, students and faculty members, who came from Latin American, Asian, European, and American universities, discussed environmental issues and the requirements of urban economies, particularly as they relate to the Matanza River Basin, which overlaps with Buenos Aires. “[This is] an emblematic case on the international level,” notes Dorina Bonetti, one of the instructors and president of Autoridad de Cuenca Matanza Riachuelo, an Argentine government organization that oversees the river basin. Approximately 3.5 million people reside in the river’s drainage basin and, according to the MIT Metro Lab’s website, 1.7 million residents in that area live in poverty and have no access to potable water or sanitation.

During the second week, the students sought to find ways to redesign water pathways flowing from the Matanza River to slum areas in Buenos Aires that are poorly integrated into the city’s overall water system. The workshop was organized by Professor Gabriel Lanfranchi of MIT and featured experts including Bonetti, José Luís Inglese, CEO of AySA, Argentina’s largest water company, and Pablo Bereciartua, Secretary for Water Resources for the South American country.

“The workshop helped familiarize students with issues impacting the architectural profession and offered them a unique way to observe, understand, and operate within real contexts,” says Associate Professor Giovanni Santamaria, who was invited as an instructor and supervised NYIT students Joseph Ortiz, Rossy Robles, Eric Blandina, and Laslzo Kovacs.

These new perspectives, Santamaria adds, allowed students to develop a deeper understanding of other disciplines and the impact architects have on local environments.

“I was exposed to the practical and technical side of metropolitan design, from finance and governance to social and ecological integration,” says Ortiz. “Through lectures from professors around the world, I learned about different cultures and situations in developing countries that need better designs for their cities.”

Communicating with international teammates, Ortiz notes, wasn’t as big of an obstacle as he had anticipated. “Everyone could see the passion in each person,” he says. “This collaboration opened up new friendships and connections for possible career paths that I had not thought about before.”

Classmate Robles enjoyed being exposed to a broader view of architectural design and planning that incorporated socioeconomic and political aspects.

“As architecture students, we tend to focus on design, but we also must understand the effects to the urban and metropolitan scales,” she says.

Throughout the water redesign process, Robles found that the biggest obstacle was formulating strategies that would satisfy many different stakeholders, such as government and public officials, corporate interests, and, of course, the citizens of Buenos Aires.

“The root of having a successful metropolitan region is to collaborate,” she says. “Everyone has a civic responsibility to do so, but to do that we need to educate future generations to understand the importance of metropolitan planning.”