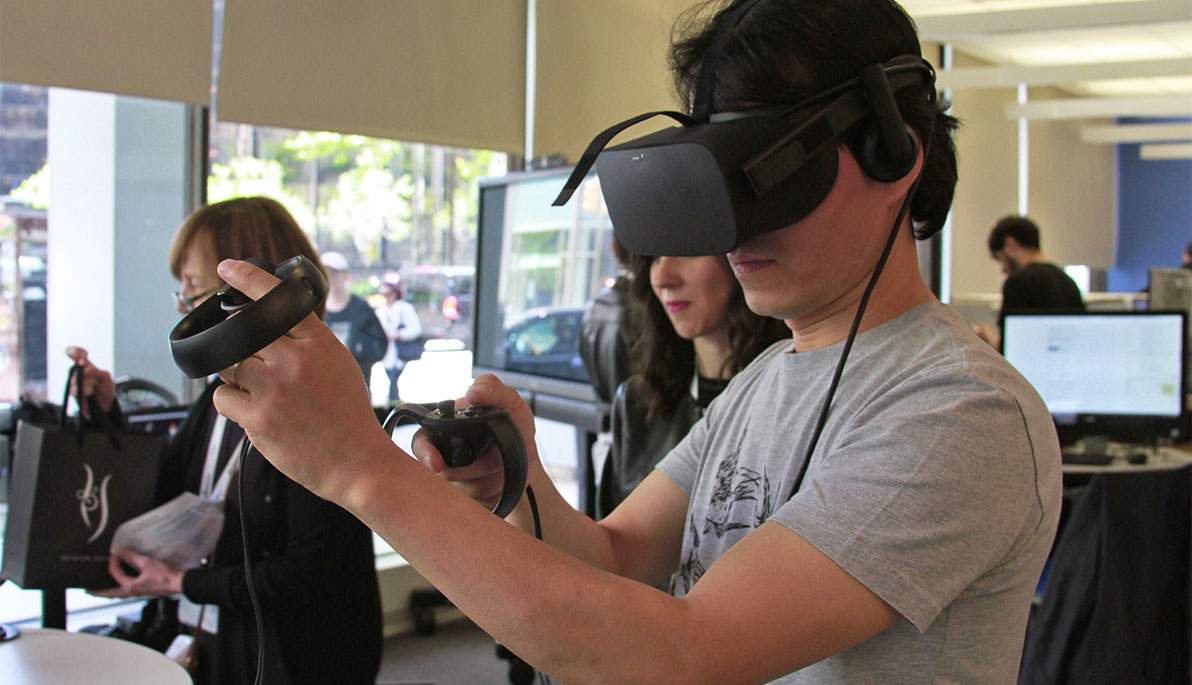 On May 11, NYIT played host to the Creative Tech Week Conference, a daylong gathering of creative technologists from industry, entertainment, education, and the arts.

The conference was the hub event of Creative Tech Week (CTW), a citywide, crowd-sourced, international festival that brings together a community of artists, programmers, executives, and designers, who are working on today’s most cutting-edge creative technologies. This is the third year NYIT has collaborated with Creative Tech Week, thanks to the leadership of Terry Nauheim, M.F.A., associate professor and chair of the Department of Digital Art and Design.

Nada Marie Anid, Ph.D., vice president of strategic communications and external affairs, welcomed attendees to NYIT Auditorium on Broadway. In her remarks she stressed the importance of universities embracing their role as “a platform where industry, academia, and government convene and debate new ideas and trends.” Given NYIT’s history as the birthplace of Pixar, the partnership with CTW seemed particularly apt. “What better place to mesh art and tech!” said Anid, who also signed copies of The Internet of Women: Accelerating Culture Change, which she co-edited, as part of a special CTW Open House event. 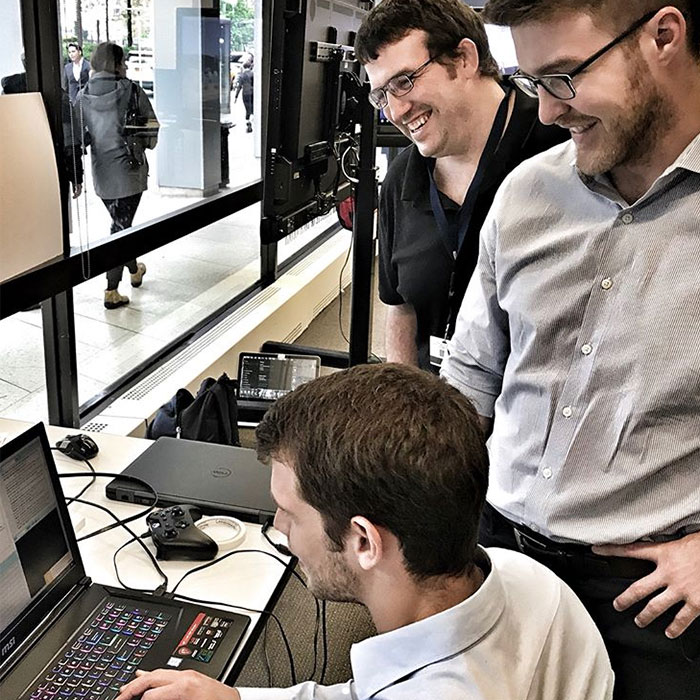 NYIT showcased its own mesh of art and tech at two exhibitions: the Innovators: M.F.A. Thesis Exhibition 2018 on the 11th floor exhibit space at 16 W. 61st St. and an exhibit of faculty work in the NYIT Library by Robert Smith, associate professor of digital art and design and Matthew Cornelius, art media technical director at NYIT College of Arts and Sciences.

Cornelius also co-hosted a brown bag lunch demonstration of augmented reality (AR), virtual reality (VR), and mixed reality (MR) devices, including the Hololens. Attendees witnessed demonstrations using Google Blocks, Google Poly API, and Tilt Brush in the creation of 3-D assets and AR projects in Unity (a game development platform) and its use in the development cycle of AR/VR applications. The event also served as a preview of NYIT’s new non-credit certificate program in VR/AR: Unity, which will be offered from July 16 to 26.

NYIT College of Osteopathic Medicine (NYITCOM) also made an appearance at Creative Tech Week. Assistant Professors of Biomedical Sciences Aleksandr Vasliyev, M.D., Ph.D., and Randy Stout, Ph.D., presented an exhibition of the school’s virtual reality medical learning laboratory and 3-D bioprinting technology. They demonstrated how through the use of virtual reality anatomy and physiology learning environments and digital creations of the human anatomy, NYITCOM students are able to build VR learning laboratories. Medical students Dylan Carmichael and Ivan Bandovic showcased the learning labs they created to build a detailed and anatomically correct animated organ-system as well as a prototype of a virtual doctor’s office that included simulated patient and exam rooms.

“Whether right here in New York City or at our magnificent Long Island campus, [NYIT’s] vision is to constantly push the envelope and merge humanism and tech,” said Anid.