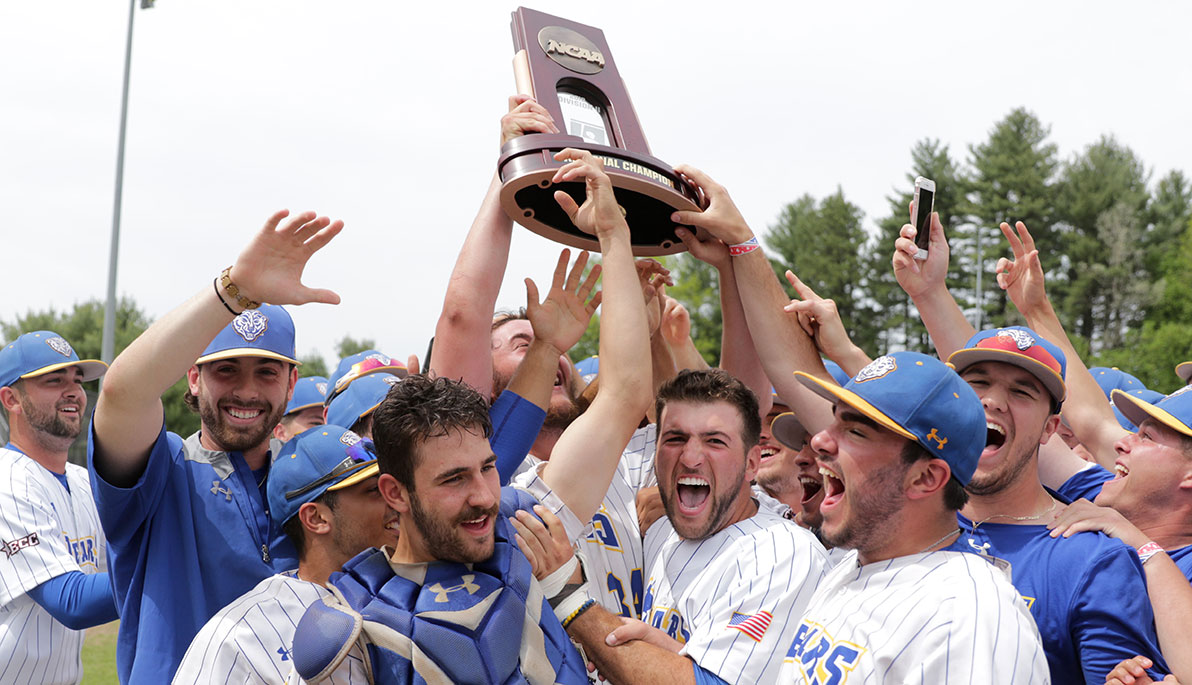 Led by first-year head coach Frank Catalanotto, the NYIT baseball team punched the program’s first-ever trip to the College World Series with a 6-3 win against Southern New Hampshire University on May 25 in Game 2 of the NCAA DII Super Regional.

The Bears entered the NCAA Tournament as the No. 5 seed in the East. They posted a 5-0 record over two weekends en route to the program’s first-ever regional championship. The final two victories came on consecutive days against defending East champion Southern New Hampshire, the No. 2 seed and Super Regional host.

The Bears were handed the No. 8 seed and will face top-seeded Colorado Mesa in the opener of the double-elimination finals on June 1 at 7 p.m. at the USA Baseball National Training Complex in Cary, N.C.

“We really felt like it was going to be a couple of years before we started winning a lot,” Catalanotto said. “To be where we are right now—one of eight teams in the whole country—it’s unbelievable.”

Added captain Jake Lebel, “I’m speechless, really. I have nothing to really say to put it into words to make it real. To go from 13 wins last year to the College World Series is absolutely ridiculous.”

EJ Cumbo, a contender for the national batting title, slugged a three-run homer and the Bears chased Penmen starter Endy Morales in a four-run first inning. Morales entered the outing having produced three straight complete games but recorded only one out in NYIT’s clincher.

The Bears have averaged 8.0 runs per game in the NCAA Tournament.

Cumbo has hit .550 (11-for-20) with two homers, eight RBIs and four walks through five NCAA Tournament games. His season average now stands at .453.

In the clincher, former walk-on Joseph Murphy earned the start and took a scoreless effort into the fifth. With NYIT leading 5-0, the Penmen then plated three runs on four walks, a hit batter and an infield single in the frame. Murphy departed with the score 5-1 and the bases loaded with two outs. Chris Keenan then entered and hit a batter and issued a walk to force in a pair of runs.

Catalanotto returned to the mound and summoned freshman Joe Keller, the third pitcher of the inning. He coaxed an inning-ending grounder to second base to preserve a two-run lead. And Keller went the rest of the way—logging 4 1/3 scoreless innings in all—to earn the victory in relief.

NYIT improved to a program-record 37-14. It marks a 17½-game improvement over last season—among the largest turnarounds in consecutive years in DII over the past two decades.

“We’ve been trying to find someone out of the bullpen that can throw strikes,” Catalanotto said. “Joe was the guy who stepped up for us. He was huge. We needed it.”