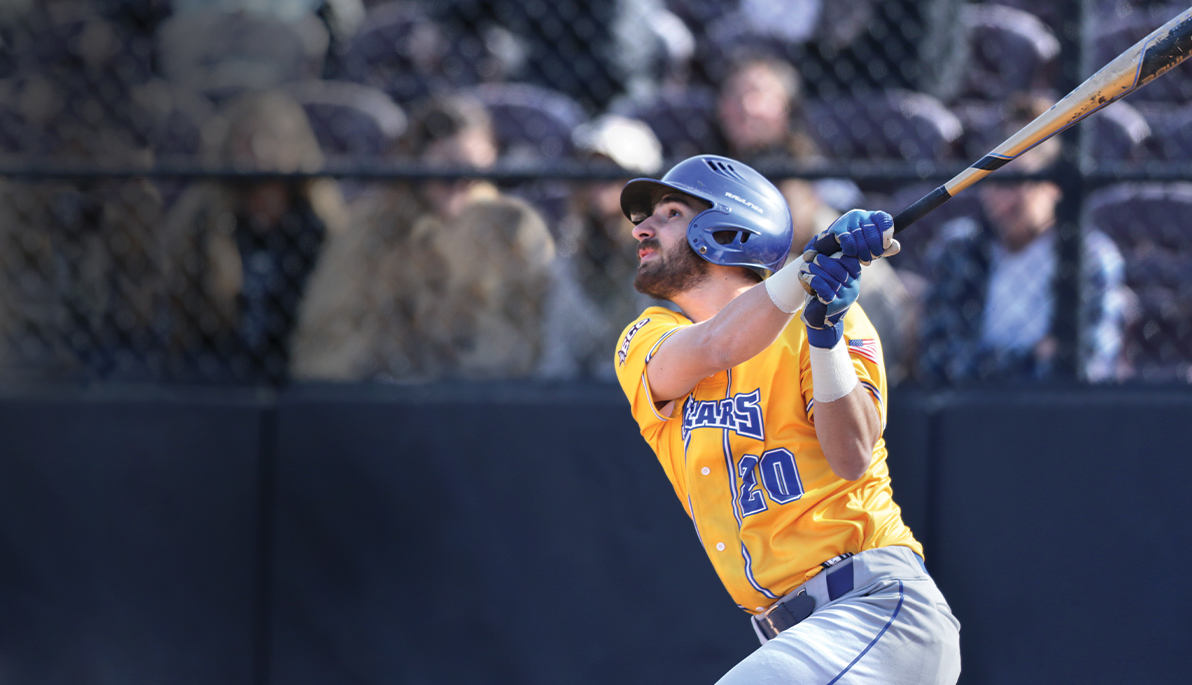 Pictured: Matt Malone, primary catcher for the Bears, at bat during a game against Adelphi.

The New York Tech baseball team began the 2018–2019 season as underdogs. They hadn’t had a winning season since 2006. Then something incredible happened.

They were nobody’s idea of a contender, regardless of the fact that they had just hired a former major leaguer to run the program or that the university had a legacy of baseball tradition. Heck, their first fall batting practice was a disaster, with everyone trying to impress the new coach with Home Run Derby swings. Instead, they made Frank Catalanotto wonder what he’d gotten himself into. But with an experienced coaching staff—48 combined years in professional baseball—and a roster of players willing to buy in, something wonderful happened at New York Tech last season. The team won a university-record 37 games and went all the way to the Division II College World Series for the first time in program history. Now they want to go back and win the whole thing.

The team’s Cinderella story started in June 2018 with Catalanotto’s hiring, a process that began with a Twitter message from a former sportswriter who had briefly covered his sparkling 14-year career. “I was hanging with my family,” said Catalanotto. “I have four daughters. I was flipping houses and giving private hitting lessons. I had done some coaching in the WBC (World Baseball Classic) with Team Italy.”

Everybody we spoke to said the same thing: You’re going to have to convince him, but you can’t go wrong if you do.

“We thought Frank was a bit beyond attainable, given his major league pedigree and how much money he had made in his career,” said Adam Rubin, assistant director of strategic communications in athletics and former sportswriter for the New York Daily News and ESPN. “But we figured we’d send him a DM. No harm in asking. We didn’t hear anything back for a few days, so we were pretty pessimistic. Turns out, he’s not overly active on Twitter. He just hadn’t seen it.”

Catalanotto was on vacation with his family when the message was sent. “I said, ‘When I get back, we can talk. But it’s not really a passion of mine to coach.’ “But the more the 45-year-old Smithtown, N.Y., native thought about it, the more he liked the idea. He talked it over with longtime friend James Goelz (B.S. ’98), a Tech alumnus who had played Triple-A ball. They both attended Smithtown High School East and trained together while playing professionally. “I told him, it’s going to consume your mind,” said Goelz. “But you’re going to love it. And he did.” First, though, Catalanotto went through the interview process, meeting with Director of Athletics Dan Vélez and a group of players.

“Everybody we spoke to said the same thing: You’re going to have to convince him, but you can’t go wrong if you do,” said Vélez. “We had lunch, a very nice conversation about what was important to him, the theme of family, integrity, and doing things the right way. As he met more people on this side, they said, ‘There’s something special about him.’”

First baseman Jake Lebel (B.S. ’19) had his doubts. “My first thought was, no way a former big leaguer is thinking about coming to coach us,” he said. “We asked him everything—how he’d run practice, change the culture. ‘Could you drive the van?’ That was a big question. He came in and said, ‘Yeah, I’ve seen your record. I know it hasn’t been great. But I’m going to come in and turn this around.’ Look what he did in the first year.”

“It was a weird situation,” added shortstop Ben McNeill. “He has way more experience than us, so why should we be asking him questions? But I’d like to thank the athletics director for letting us. Once we talked to Frank, he believed in us. We all just knew he was the right guy.”

Getting Down To Business

Catalanotto took the job. He added Goelz to his staff and hired Goelz’s recommendation for pitching coach, Christopher Rojas (B.S. ’98), another Tech alumnus. Raymond Giannelli (B.S. ’96), who starred at Tech and played 18 games in the major leagues, came on as the bench coach, rounding out a staff that included Frank Battaglia and Angelo Coscia.

The teaching started immediately. The first time the man who had amassed 1,113 hits and a .291 average for the Tigers, Rangers, Blue Jays, Brewers, and Mets watched his club taking batting practice in the fall, he was thrown off base. “To a man, each guy was trying to jack balls out of the ballpark,” said Catalanotto. “At the end, I called everyone over: ‘Guys, you see that? That will never, ever happen again.’ We explained how to take a professional BP [batting practice], working your hands, hitting the ball where it’s pitched, going the other way.” 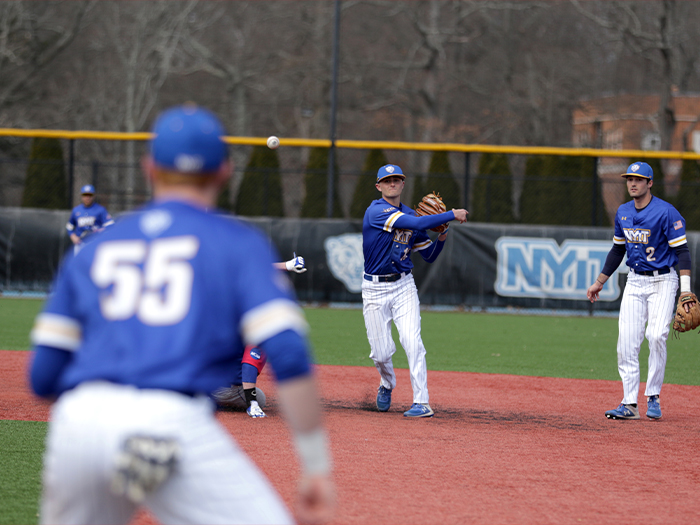 EJ Cumbo, a redshirt freshman outfielder who finished fifth in the nation among Division II baseball players with a .437 average, was one of those guys. “I was trying to impress him,” he said. “Everyone was just trying to crush it over the fence. It was bad. As the season went on, we went with their approach.”

The administration approved funds so the team could use an indoor facility to practice during the winter, and Catalanotto and coaches poured on the instruction. They allowed the players to hear a variety of voices, too. One day, former New York Mets star David Wright visited and spoke to the baseball and softball teams. “That was really cool,” said McNeill. “He told us if you believe in yourselves, the team, the goals, you can be successful.”

“They seemed genuinely excited to talk some baseball and softball, and I loved all the questions,” said Wright. “Even after we spoke as a group, a bunch of them approached me afterward with different questions.”

“I was hoping we’d be above .500 or better,” said Catalanotto. “I was hoping we could get into the playoffs for the East Coast Conference. As the season kept going, our mindset changed.” 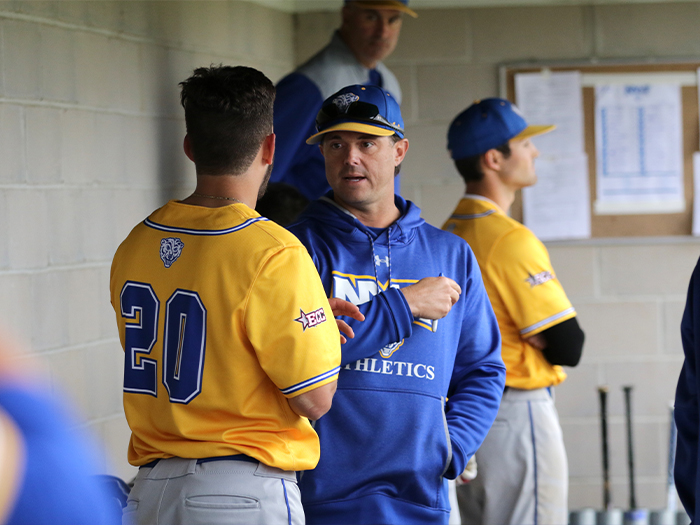 The first glimpse came during the season-opening trip to Myrtle Beach when the Bears went 4-0. Moises Robles and Dean Fazah combined on a no-hitter against powerful Franklin Pierce. The offense scored 43 runs. “We faced Le Moyne and Franklin Pierce in back-to-back night games, 30-win teams,” said Goelz. “We beat them both. I think everybody then was automatically, ‘We’re going to be good.’”

As with most teams, rituals formed. One involved the 2001 rock song, “Bodies” by Drowning Pool, which had been one of Catalanotto’s walk-up songs as a player.“ We’d play that on the bus after we won,” said Lebel. “The whole bus would erupt. We’d be banging on the cabinets and the seats, making a bunch of noise. That was a blast, people dancing around everywhere. The first time we did it, Coach turned around, ‘What the heck was that?’ All the coaches loved it: ‘Play the song, play the song.’”

The team formed close bonds quickly, and a group chat became a favorite spot for laughs. Catalanotto got kudos for some goofy photos he posted, including one of him in his pool with the Super Regional trophy. “I don’t know of any other coach who would send us a picture of himself with the trophy that said, ‘Happy Memorial Day. I know I’m going to have one’,” said McNeill.

The Bears were 8-4 when they reached East Coast Conference play and then went 21-7 in the conference. New York Tech hosted the ECC tournament, but the Bears were eliminated by Bridgeport, a team they had beaten three out of four times during the season. The big question loomed: Had they done enough to get a bid to the NCAA Division II Regionals?

On Sunday, May 12, the team gathered in the Bears Den on the Long Island campus to watch the selection show live on NCAA.com. The players snacked on pizza, wings, and cookies. And hoped. “When we saw our name, everyone started jumping around,” said McNeill. “Our season wasn’t over. We really loved playing together. To be told we’d have more was really exciting.” 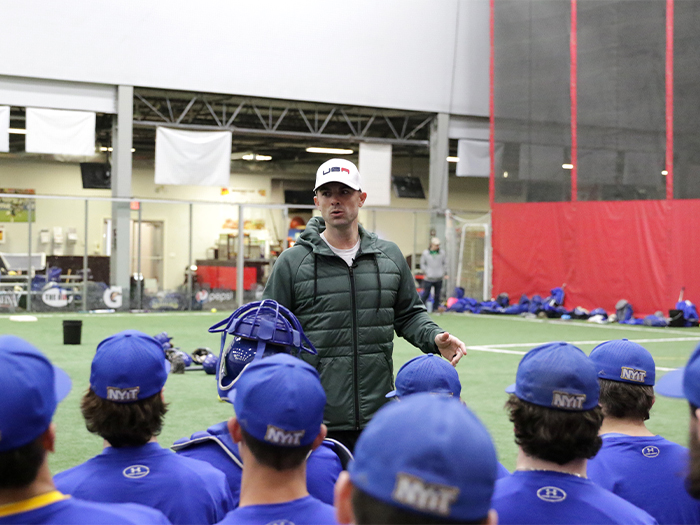 Former Met, David Wright, addresses the baseball team during a surprise visit to practice in January

In their first NCAA Tournament since 1983, the Bears roared through the Regionals and Super Regionals with five consecutive victories over powerful programs, earning the university’s first-ever berth in the College World Series. “I’m watching us get that last out, and it’s like slo-mo,” recalled Rojas. “You can feel everyone’s pulse in the dugout. It was intense.”

In Cary, N.C., the site of the Division II College World Series, banners trumpeting the school delighted the players. Lebel and McNeill raised the Tech flag on one of the eight flagpoles there, one for each team. “The first thing you see is a map and each one of our schools, where it is, with our logo,” said Cumbo. “We were the only one from the Northeast and realized that wow, this is going to be insane. The hotel had balloons with our colors. The room key card had ‘2019 NCAA Division II Baseball Championship’ on it. I’ve kept mine in my wallet ever since. That’s the coolest thing. That thing is going nowhere, until I get the next one.” Added Rojas, “I’ve worn my DII Baseball Championship hat pretty much every day since.”

Tech, seeded eighth, was knocked out in two games. In their opener, they lost to Colorado Mesa, the No. 1 seed and eventual runner-up to the University of Tampa. In the second game, they fell to No. 4 Ashland.

There are things they achieved that go beyond just a World Series berth: Experience. Pride. The right to dream even bigger. Some lessons, too. And new responsibilities. “Work hard, it’ll show,” said McNeill. “Now they’re going to have a bull’s-eye on their backs. They have to be ready to answer that bell,” said Hirschfield, whose No. 19 was retired during a pregame ceremony last season.

“There’s a lot of power in remembering where you come from and how you can go back if you don’t do the right things,” said Vélez. “That’s our next challenge now, to make sure that doesn’t creep in. We got a taste, but we were 0-2. Let’s go and win some games. We don’t want to be a flash in the pan.” 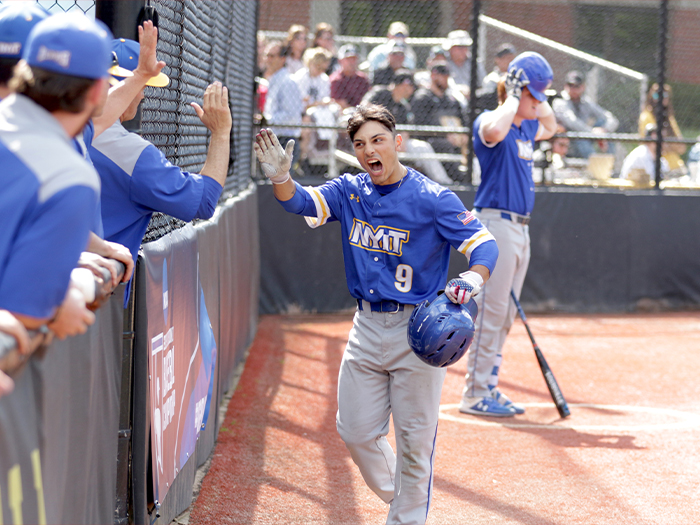 All-American EJ Cumbo returns to the dugout with enthusiasm after delivering a game-tying homer in the NCAA Regional opener in May.

“Our target is a little narrower now,” said Rojas. “We want to be national champion. It’s going to require more teaching, bringing in the right student-athletes going forward, good character fits, academic fits. We have to capitalize on the good buzz around us. We have to close the deal on it.”

“I’m going to remember this the rest of my life,” said Cumbo. “This will always be one of the greatest accomplishments I’ve ever been part of.”

This article originally appeared in the Fall 2019 issue of New York Institute of Technology Magazine.